In Praise of Black Capped Chickadees 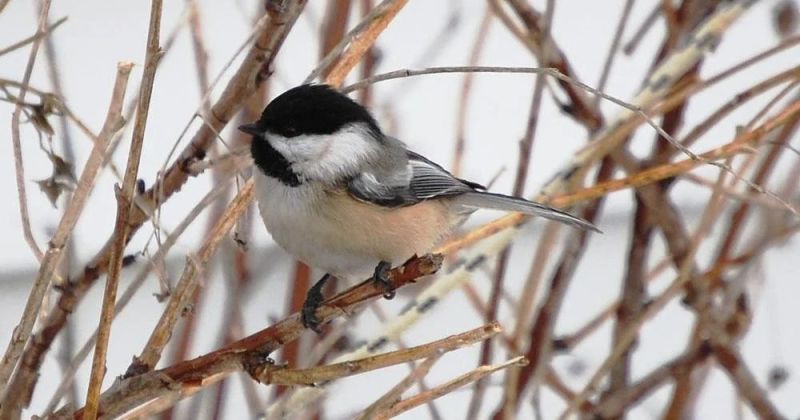 I’d like to offer some words in praise of chickadees. Though seven different species inhabit North America, four of them in Alaska, here I will focus on the black-capped chickadee, the bird that transformed my life nearly three decades ago.

Because they’re among the most common birds to inhabit the Anchorage area—and much of our continent—nearly everyone can recognize black-capped chickadees (which I sometimes simply call black-caps) and their familiar chick-a-dee-dee calls.

At the same time, I suspect that most people largely ignore black-caps, don’t give them much thought, simply because they are so common (those who put out bird feeders being exceptions to that rule). And because they’re small and “ordinary,” they’re easy to overlook, easy to take for granted.

Here I’ll show many of the ways that black-capped chickadees are in fact among the most extraordinary creatures with whom we share this northern landscape, their exceptional nature documented by researchers who’ve closely examined their lives.

I’ll begin with this: black-capped chickadees have outstanding memories.

Starting in summer, these small woodland birds begin caching seeds, insects, and other foods throughout their forest territories, which for mating pairs may measure only a few acres. (Known to be homebodies, chickadees don’t stray far once they’ve settled into their chosen part of the forest—or urban neighborhood.)

Scientists tell us that they may hide food in hundreds, perhaps even thousands, of places during their “scatter hoarding” efforts. And—here’s what is really amazing—they are able to relocate and retrieve those pieces of food weeks or even months later, during winter’s scarcity. And they can remember the spots where they’ve already collected food, so no need to return there.

Black-caps are able to do this because they have an unusually large hippocampus, the part of the brain closely linked to spatial memory.

But there’s more. Researchers have determined that the hippocampus of black-caps grows new cells in late summer and fall, when food caching reaches its peak, expanding by up to 30 percent. In spring, when insects again become abundant and food storage is less important, the hippocampus then shrinks back to “normal” size. If that isn’t astonishing, I’m not sure what is.

It gets even better: one study has shown that Alaska’s black-caps, which must survive longer and harsher winters, cache more food and are able to find it much more quickly than chickadees in Colorado; not surprisingly, our far-north birds also have a larger hippocampus than their relatives in more temperate regions.

How all of this happens remains a mystery to us humans.

Chickadees have evolved other ways to survive our longest, harshest season. For one thing, they are “built” to withstand extreme cold and employ a variety of techniques to make it through winter.

Like other far-north songbirds, black-caps grow additional feathers in winter, up to 30 percent more according to studies I’ve found online. And they can fluff this abundance of feathers to better retain heat with what is essentially a super-insulating one-inch-thick coat.

In Alaska’s Interior, that coat is somehow able to keep the body’s core at 108 degrees even in temperatures that may fall to minus 40 or below—a 150-degree (or greater) difference.

Have I mentioned that black-caps are amazing animals?

While their daytime core temperatures hover near 108 degrees even in extreme cold, the exposed feet of chickadees (and other northern birds) cool down to temperatures that approach freezing, a strategy that helps the chickadees retain body core heat. Warmed blood flowing from their feathered bodies to the feet helps to warm blood returning from the feet, minimizing heat loss while maintaining blood circulation to the birds’ chilled extremities.

To preserve their body warmth, chickadees eat prodigious amounts of food in winter (which is made easier by their scatter hoarding—and also bird feeders put out by humans). Each day they stuff themselves with enough food to gain an additional 10 percent or more of their weight, most of it as fatty tissue, in order to make it through the following night. Anyone who maintains a bird feeder knows their passion for black oil sunflower seeds, with their high caloric content, though as temperatures drop, black caps will also eat peanut butter and suet.

Black-caps also depend on each other in their winter foraging. Like several other songbird species—for instance redpolls, pine grosbeaks, and bohemian waxwings—they join in flocks that increase their ability to find sources of food.

Just as amazing as their enhanced memories are the ways they survive winter’s long nights. One key is to find tree cavities that provide insulation from the frigid night air. Once inside, to save calories black caps employ what scientists call “regulated hypothermia.” They gradually lower their body temperature by 12 to 15 degrees, which in turn slows their metabolism and the rate they burn up body fat.

At the same time, the chickadees repeatedly flex their chest muscles to generate heat, which is then trapped within their puffed-up feathers. Essentially they shiver through the night. In doing so, they use up most or all of the fat reserves they gained through their prodigious eating the previous day.

As Alaska science writer Ned Rozell has pointed out, the human equivalent of what black-caps do would be a 150-pound person gaining an additional 15 pounds during a single day’s time—and then losing that 15 pounds during the following night. (Chickadees, he further notes, weigh a half-ounce or less, or about as much as a handful of paper clips.)

Alaskan researcher Susan Sharbaugh, one of the scientists who have taught us much about the lives of chickadees, long wondered exactly how chickadees spend their nights. After attaching miniscule transmitters to the bodies of some black-caps in the Fairbanks area, she learned that chickadees spend their nights alone, in tiny cavities with openings about the size of a quarter. Once inside a space that can just barely fit its body—which helps explain why the tails of black-caps are sometimes bent in winter—the chickadee will puff up its feathers, drop its temperature, and shiver away the night.

Finding such a roost “Is just as critical, if not more critical, than finding food,” Sharbaugh once told Rozell. “You have to find a good and insulated place to spend the night when you’re that small.”

Here’s another way that we humans underestimate black-capped chickadees: they have a complex language and employ as many as 15 different vocalizations (and perhaps more) when speaking with each other. And isn’t that a surprise? Even the common and well-known chick-a-dee-dee call has different meanings, depending on how may “dees” a black-cap adds to the end of the call.

It turns out that the call can become a warning signal when danger lurks, for instance a hawk or owl or other animal that preys on songbirds. And the more dee-dee-dee-dees, the greater the threat. Sometimes even humans—or at least their dogs—may be perceived as threats, which is why you’ll sometimes hear a flock of black-caps break into a loud dee-dee-dee-dee-dee-dee chorus when you surprise them, for instance while they’re feeding on the ground.

And though many people don’t consider black-caps to be singers, they are. The song is a short, sweet, and high-pitched one, either fee-bee or fee-bee-bee. At times those notes will be whispered, as when mates are talking to each other around their nest, so as not to attract attention, or when talking to their young.

Beyond their remarkable abilities to survive, even thrive, in severe sub-Arctic winters, and the many ways they’ve evolved to communicate with one another, black-caps have a kind of magic to them, for those who pay close enough attention, and here I’ll touch on that too. For one thing, there are few natural sounds more uplifting to my spirit than the bright and cheering calls and songs of black-capped chickadees. One of my morning rituals is to step outside the house—usually to begin a stroll with Denali—and listen for the voices of black-caps (and yes, other songbirds).

There is something reassuring to me in a black-cap’s presence. And much more often than not, they are heard before they’re seen (except, perhaps, at feeders). Sometimes they are the only birds I’ll hear on my local woodland walks and for me the forest would be a quieter and lonelier place without them. And finally (for now) there’s this: black-cap chickadees did indeed transform my life when they finally gained my full attention in December 1993.

As I wrote at the time, a small group of black-caps had grabbed my attention soon after I’d moved into a house on Anchorage’s Hillside. I placed a makeshift feeder on my home’s back deck railings, and within a day or two, black-caps accepted my invitation to dine: “For each, the routine was similar: dart in, look around, peck at the tray, look around some more, and dart back out. Nervous little creatures, full of bright energy, they soon had me laughing at their antics. By the time they moved on, I sensed an all-too-rare upwelling of fascination and joy.

“Within days, a whole new world opened up as woodland neighbors I'd never known, or even imagined, joined the black-caps at my feeders: red-breasted nuthatches, common redpolls, pine grosbeaks, and pine siskins. What’s remarkable is that all of those species were—and are—common residents of the Anchorage area. Yet in prior days and years, I had no idea.

“My newfound interest in birds grew quickly, surprising even me. What started as mere curiosity quickly bloomed into a consuming passion. I roamed bookstores in search of birding guidebooks; spontaneously exchanged bird descriptions with a stranger; and purchased 50-pound bags of sunflower seeds. All of this seemed very strange to a middle-aged guy who’d never been intrigued by birds (except for charismatic raptors) and had previously judged bird watchers to be rather odd sorts. I didn’t know what it meant, except that a door had opened. And I passed through.”

Among all the birds I’ve come to know, black-capped chickadees have had—and will always have—a special place at the top of my affections, partly for this reason: they’ve reminded me how my world can expand and become enriched when I make the effort to pay attention. What else awaits me in our world, I wonder, that I haven’t yet discovered or noticed?


Anchorage nature writer and wildlands/wildlife advocate Bill Sherwonit is a widely published essayist and the author of more than a dozen books, including Animal Stories: Encounters with Alaska’s Wildlife, Changing Paths: Travels and Meditations in Alaska’s Arctic Wilderness, and Living with Wildness: An Alaskan Odyssey. He currently writes a weekly “City Wilds” column for the Anchorage Press.

You cannot do a kindness too soon, for you never know how soon it will be too late.
Ralph Waldo Emerson