Home > Everyday Heroes > A 15-Year-Old's Bucket List Goes Viral
In every community there is work to be done. In every nation, there are wounds to heal. In every heart there is the power to do it.
Marianne Williamson 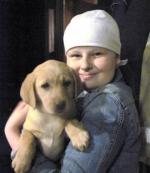 Jun 13, 2011-- Alice Pyne, 15, has been battling a deadly form of cancer for the last four years that is now spreading throughout her body. Last week at her mother's suggestion the teenager started a blog for friends and family, titled "Alice's Bucket List" and included her life wishes (high on the list were swimming with sharks and having everybody sign up as bone marrow donors). No one anticipated the tidal wave of support that followed. Thanks to the internet, in less than a week hundreds of thousands all over the world, including Britain's Prime Minister, had rallied to help Alice check off as many of her bucket list items as possible. (13404 reads)

You don't always have to chop with the sword of truth. You can point with it too.
Anne Lamott