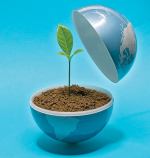 Jul 2, 2004-- When Kentucky Fried Chicken, an international fast food chain, announced plans to open up a restaurant in Tibet, the Dalai Lama wrote them a letter and said that mass slaughter of chickens violated Tibet's traditional values. KFC's parent company, Yum Brands, says it has called off its plans. (1350 reads)

âYou are the bows from which your children as living arrows are sent forth.â
Kahlil Gibran

We've sent daily emails for over 16 years, without any ads. Join a community of 159,560 by entering your email below.