Home > Everyday Heroes > A Doctor-Poet's Birthday in Burundi
The capacity to give one's attention to a sufferer is a very rare and difficult thing; it is almost a miracle; it is a miracle.
Simone Weil

A Doctor-Poet's Birthday in Burundi 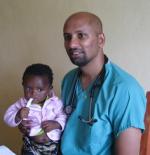 May 19, 2009-- There are corners of the world whose struggles and triumphs seem hidden from view. Kigutu, is one of them -- a little village three hours away from Bujumbura, capital of Burundi. A DailyGood contributing editor, Sri, has called this place home for the last three months. As an American doctor and UCSF Faculty, Sri dedicates five months of the year to working abroad in regions of extreme need. Now, from the midst of Kigutu's harsh realities come his moving stories and innermost reflections. He writes not just as a compassionate doctor pushed to the boundaries of his ability, but as a deeply human poet who sings of both suffering and its overcoming with powerful presence. (4799 reads)