Home > Latest DailyGood News > Bill Clinton Starts a Vegan Revolution!
If you are what you eat, and you don't know what you're eating, do you know who you are?
Unknown 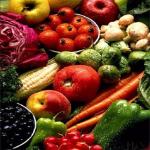 Oct 16, 2010-- Joining the ranks of celebrities who are sort of vegan, Bill Clinton has announced that to lose a bunch of weight and get his ticker in better shape, he's adopted a plant-based diet. Now, instead of snack foods and burgers, he's a sort-of-pescetarian. Specifically, he's dairy and meat-free, "occasionally treating himself to a little fish. He eats lots of plants, drinks almond milk with protein powder, and is a new man because of it. He even weighs what he did in high school. But that's not why he did it. "I did it for my heart," he states, pointing out that 82 percent of the people who have gone on such diets have had a full recovery in heart health. (6027 reads)

Read Full Story
What's your reaction? inspiring fascinating courageous hopeful
Take ActionExperiment with your own plant-based diet and see how it affects your health.

Photography is the power of observation, not the application of technology.
Ken Rockwell

We've sent daily emails for over 16 years, without any ads. Join a community of 244,915 by entering your email below.