Home > Generosity > Gandhi's Ten Rules for Changing the World
The difference between what we do and what we are capable of doing would suffice to solve most of the world's problems.
Mahatma Gandhi 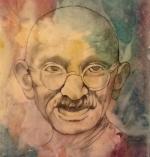 Jun 28, 2013-- Change the world; we hear those words thrown around quite frequently, and to some, the notion seems incredulous. However, if we take an inner approach, rather than an outer one, and transform our individual selves into adopting the qualities we wish to see in the world, then the task at hand won't seem as daunting. In the wise words of Mahatma Gandhi, "As human beings, our greatness lies not so much in being able to remake the world -- that is the myth of the atomic age -- as in being able to remake ourselves." In this article, the Positivity Blog's, Henrik Edberg, addresses Gandhi's top ten fundamentals for changing the world. (1332191 reads)

Read Full Story
What's your reaction? inspiring fascinating courageous hopeful
Take ActionTake some time today to do some self-reflection. Think of one thing you can work on, to create a positive shift within yourself; something you wish to see in others.

We've sent daily emails for over 16 years, without any ads. Join a community of 160,596 by entering your email below.