Home > Generosity > Stolen Focus: Why You Can't Pay Attention
We live in a culture that is constantly amping us up with stress and stimulation.
Johann Hari 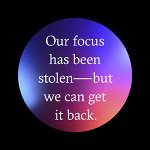 Apr 4, 2022-- "I think there's a more interesting definition of attention that's been developed really in the last five years in this new attentional environment that comes from a man named James Williams Dr. James Williams who was at the heart of Google for many years, was horrified by what they were doing to our attention, quit, and became, I would argue, the most important philosopher of attention in the world today. And he's developed this kind of typology of attention. He argues there are three layers of attention -- I would actually argue theres a fourth one as well -- that I think help us to think about this question in a more interesting way." Johann Hari, author of "Stolen Focus:Why You Can't Pay Attention," shares more in this interview. (5555 reads)

Read Full Story
What's your reaction? inspiring fascinating courageous hopeful
Take ActionLearn more about the book and listen to some audio clips from it here. [more]

Happiness is not a reward -- it is a consequence.
Robert Green Ingersoll

We've sent daily emails for over 16 years, without any ads. Join a community of 165,963 by entering your email below.