The Politics of Play 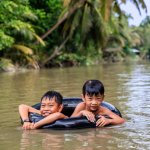 Sep 11, 2022-- "Indigenous philosophies of childhood overwhelmingly agree on one thing: that a child should not be forced into obedience but should have liberty of body, mind, and will. Inuit children have traditionally experienced extraordinary freedom and would become 'self-reliant, caring, and self-controlled individuals,' an Inuit person I met in Nunavut told me. By the age of ten, their self-control is 'almost infallible,' according to anthropologist Jean L. Briggs. Similarly, Amazonian myths place huge importance on self-restraint and self-discipline. Fairy tales seem to teach the same message, according to psychoanalyst Bruno Bettelheim: at the end of the tale, the child has 'become an autocrat in the best sense of the word -- a self-ruler... not a person who rules over others.' Far from creating selfish brats or Goldingesque monsters, this philosophy emphasizes that the corollary of liberty is self-control." In this intriguing essay Jay Griffiths explores the politics of play. (1336 reads)

Read Full Story
What's your reaction? inspiring fascinating courageous hopeful
Take ActionWhat is one of your most vivid memories of playing as a child? Share it with a dear one today, and ask them about theirs.

Come forth into the light of things,
Let Nature be your teacher.