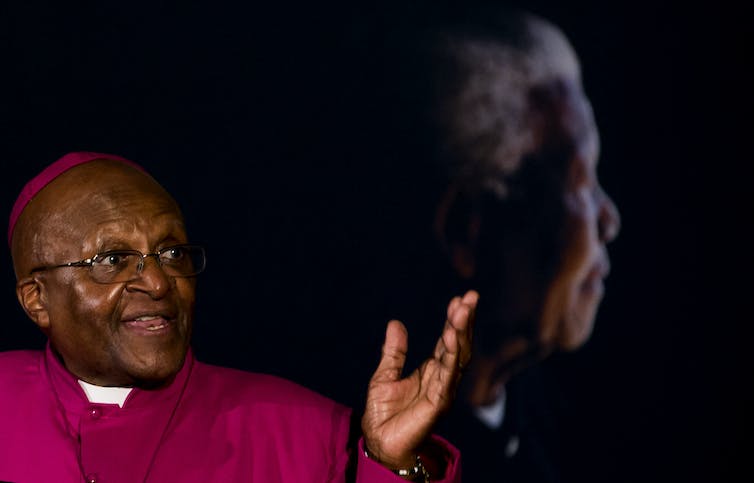 Archbishop Emeritus Desmond Mpilo Tutu has died at the age of 90.

Archbishop Tutu earned the respect and love of millions of South Africans and the world. He carved out a permanent place in their hearts and minds, becoming known affectionately as “The Arch”.

When South Africans woke up on the morning of 7 April, 2017 to protest against then President Jacob Zuma’s removal of the respected Finance Minister Pravin Gordhan, Archbishop Tutu left his Hermanus retirement home to join the protests. He was 86 years old at the time, and his health was frail. But protest was in his blood. In his view, no government was legitimate unless it represented all its people well.

We will pray for the downfall of a government that misrepresents us.

These words echoed his stance of ethical and moral integrity as well as human dignity. It is on these principles that he had fought valiantly against the system of apartheid and became, as the Desmond Tutu Foundation rightly affirms,

an outspoken defender of human rights and campaigner for the oppressed.

But Archbishop Tutu didn’t stop his fight for human rights once apartheid came to a formal end in 1994. He continued to speak critically against politicians who abused their power. He also added his weight to various causes, including HIV/AIDS, poverty, racism, homophobia and transphobia.

His fight for human rights wasn’t limited to South Africa. Through his peace foundation, which he formed in 2015, he extended his vision for a peaceful world “in which everyone values human dignity and our interconnectedness”. 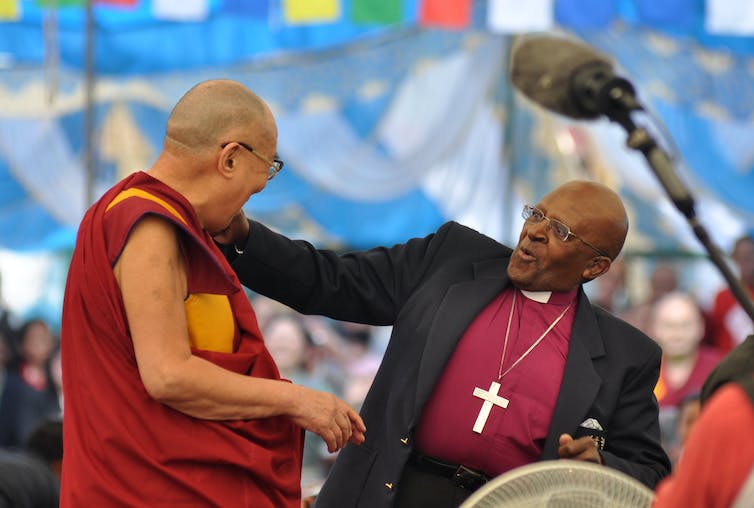 Archbishop Tutu with the Dalai Lama at the Tibetan Children’s Village school in Dharamsala, in 2015. EFE-EPA/Sanjay Baid

He also became relentless in his support for the Dalai Lama, whom he considered his best friend. He condemned the South African government for refusing the exiled Tibetan spiritual leader a visa to deliver the “Desmond Tutu International Peace Lecture” in 2011.

Archbishop Tutu came from humble beginnings. Born on 7 October, 1931 in Klerksdorp, in the North West Province of South Africa where his father, Zachariah was a headmaster of a high school. His mother, Aletha Matlare, was a domestic worker.

One of the most influential figures in his early years was Father Trevor Huddleston, a fierce campaigner against apartheid. Their friendship led to the young Tutu being introduced into the Anglican Church.

After completing his education he had a brief stint teaching English and History at Madibane High School in Soweto; and then at Krugersdorp High School , west of Johannesburg; where his father was a headmaster. It was here that he met his future wife, Nomalizo Leah Shenxane.

It is interesting that he agreed to a Roman Catholic wedding ceremony, although he was Anglican. This ecumenical act at the very early stage in his life gives us a hint of his commitment to ecumenical work in later years.

He quit teaching in the wake of the introduction of the inferior “Bantu education” for black people in 1953. Under the Bantu Education Act, 1953, the education of the native African population was limited to producing an unskilled work force.

In 1955 Tutu entered the service of the church as a sub-deacon. He got married the same year. He enrolled for theological education in 1958 and, after completing his studies, was ordained as a deacon of Saint Mary’s Cathedral in Johannesburg in 1960, and became its first black dean in 1975.

In 1962 he went to London to pursue further theological education with funding from the World Council of Churches. He earned a Master of Theology degree, and after serving in various parishes in London, returned to South Africa in 1966 to teach at the Federal Theological Seminary at Alice, Eastern Cape.

One of the lesser known facts is that he had special interest in the study of Islam. He had wanted to pursue this in his doctoral studies, but this was not to be. 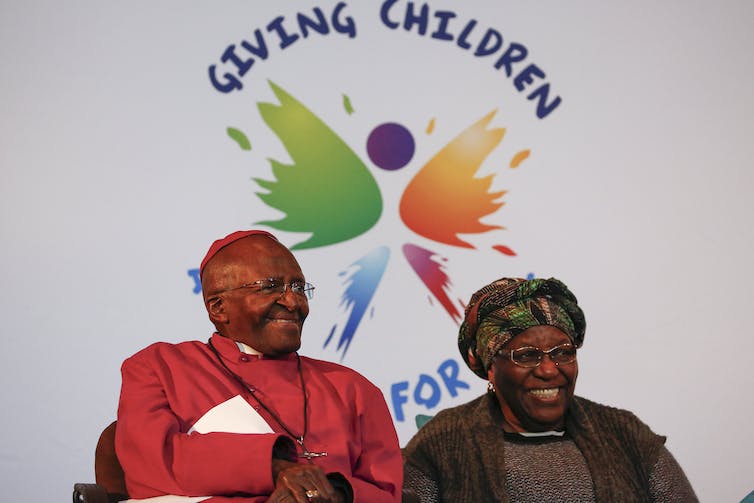 Archbishop Emeritus Desmond Tutu and his wife Tutu at the Youth Health Festival in Cape Town in 2016. EFE-EPA/Nic Bothma

The activities he was involved in in the early 1970s were to lay the foundation for his political struggle against apartheid. These included teaching in Botswana, Lesotho and Swaziland and, thereafter, a posting to London as the Associate Director for Africa at the Theological Education Fund, and his exposure to Black Theology. He also visited many African countries in the early 1970s.

It was at St Mary’s that Tutu first confronted the then apartheid Prime Minister John Vorster, writing him a letter in 1976 decrying the deplorable state in which black people had to live.

On 16 June Soweto went up in flames, when black high school pupils protested against the forced use of Afrikaans as a medium of instruction, and were mowed down by apartheid police.

Bishop Tutu was thrust deeper and deeper into the struggle. He delivered one of his most passionate and fiery orations following the death in detention of the black consciousness leader, Steve Biko in 1977.

His role as the General Secretary of the South African Council of Churches, and later as the rector of St. Augustine’s Church in Orlando West in Soweto, saw him become an ardent critic of the most egregious aspects of apartheid. This included the forced removals of black people from urban areas deemed to be white areas.

With his growing political activism in the 1980s, the Arch became a target of the apartheid government’s full scale victimisation and faced death threats as well as bomb scares. In March 1980 his passport was revoked. After much international outcry and intervention, he was given a “limited travel document” two years later to travel overseas.

His work was recognised globally, and he was awarded Nobel Prize for Peace in 1984 for being a unifying leader in the campaign to resolve the problem of apartheid in South Africa.

He went on to receive more distinguished awards. He became the Bishop of Johannesburg in 1984, and the Archbishop of Cape Town in 1986. In the following four years leading up to the release of Nelson Mandela after 27 years in prison, the Arch had his work cut out for him. This involved campaigning for international pressure to be brought on the apartheid through sanctions. 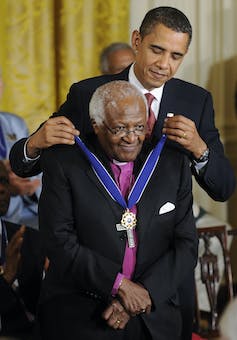 Archbishop Tutu received the Presidential Medal of Freedom from US President Obama in 2009. EFE-EPA/Shawn Thew

After 1994, he headed the Truth and Reconciliation Commission. Its primary goal was to afford those who committed human rights abuses – for or against apartheid – the opportunity to come clean, offer legal amnesty to deserving ones, and to enable the perpetrators to make amends to their victims.

Two greatest moments in his personal life took his theological outlook beyond the confines of the Church. One was when his daughter Mpho declared she was gay and the church refused her same sex marriage. The Arch proclaimed

If God, as they say, is homophobic, I wouldn’t worship that God.

The second was when he declared his preference for assisted death.

South Africa is blessed to have had such a brave and courageous man as The Arch, who truly symbolised the idea of the country as a “rainbow nation” . South Africa will feel the loss of the moral direction of this brave soldier of God for generations to come. Hamba kahle (go well) Arch.

This article is republished from The Conversation under a Creative Commons license. Read the original article. P. Pratap Kumar, is Emeritus Professor, School of Religion, Philosophy and Classics, University of KwaZulu-Natal

To think creatively, we must be able to look afresh at what we normally take for granted.
George Kneller