Home > News > SolePower Aspires to Put a Charge in Your Step

SolePower Aspires to Put a Charge in Your Step 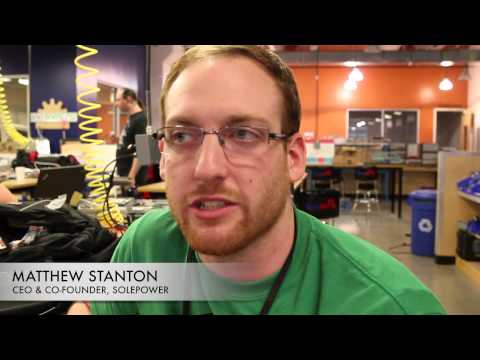 Cell phones are transforming lives in places like Sub-Saharan Africa, where they are crucial for advancing everything from education to medicine to commerce.

Enter SolePower. Using a basic shoe insert, SolePower allows users to charge mobile electronics simply by walking. In capturing the kinetic energy of footsteps, SolePower’s shoe insert converts energy into electrical power that is stored in a battery for later use. The battery is then used to charge electronics like cell phones.

The device has the potential to be a game-changer in places like Kenya, where 84% of the population owns cell phones but only 14% has access to electricity.

The same applies to lights: energy poverty, as its termed. Ten billion dollars is spent annually on kerosene-fueled lighting in developing nations, which is highly polluting, inefficient, and more costly than electric lighting, particularly when the electricity is generated from a footstep. SolePower wants to address both - the cellphone and the lightbulb.

Matthew Stanton, co-founder of SolePower, says the biggest challenge his team faces is making the device as efficient and compact as possible. “There are only 20 watts in a step. So if you’re losing a few percentages in efficiency, you are drastically reducing the power output in the device.”

The cost of the insert will vary depending on location. In developed regions, SolePower expects to charge between $135-$150 per insert. Targeting hikers and backpackers, they will focus on distributing to high-end outdoor retailers like REI. In developing nations, the insert will likely sell for $35-$50, which Stanton says is in line with similar solar solutions that have yielded substantial sales in areas like Kenya and sub-Saharan Africa.

“It’s hard to imagine there are that many people who don’t have electricity when you consider how important things like cell phones and lights are to being able to develop and innovate at all,” Hahna Alexander, co-founder of the Pittsburgh-based startup, reflects.

It may still be beyond the reach of consumers in these $2 a day markets; that will require Sole Power to develop their consumer finance model further, perhaps adapting models of micro-payments and microfinance to make it within their reach.

In this video, Alexander and Stanton explain how they came up with the idea for the insert, and how they plan to use it to put a spring in the step and a charge in the phone of movers across the world.

Monica Gray is a DC-based filmmaker and the Senior Video Correspondent at The Diplomatic Courier.

Compassion is to share the pain without sharing the suffering.
Shinzen Young

We've sent daily emails for over 16 years, without any ads. Join a community of 244,605 by entering your email below.