How One Woman's Food Redistribution App is Feeding Thousands 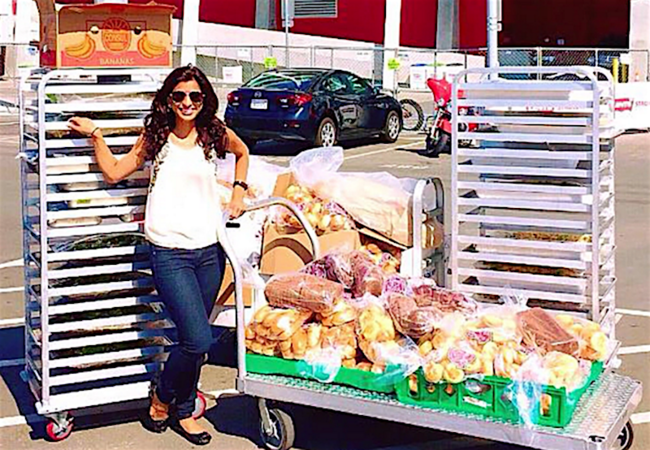 Komal Ahmad is solving what she calls the "most unnecessary problem of our time." Photo: Facebook

Komal Ahmad was a student at UC Berkeley when she experienced a life-changing moment. She had just returned from summer training for the U.S. Navy when she met a homeless veteran on the sidewalk. He hadn’t eaten in three days.

Yet, across the street, thousands of pounds of uneaten food was being thrown away by her school. This was unacceptable to Ahmad, so she did something about it.

“Those who have and are wasting and those who need and are starving — and they’re both living quite literally right across the street from each other,” she told the New York Times. “That’s just ridiculous.”

Ahmad started experimenting with ways that technology could help redistribute uneaten food to those who need it. Her first project was Feeding Forward, a local partnership with UC Berkeley’s cafeteria. It grew into Copia, a food redistribution app that has given away an estimated 600,000 pounds of food to 720,000 people in the Bay Area. During the Super Bowl, Copia organized numerous pickups from events and parties that fed over 41,000 people with food that otherwise would have gone to waste.

The app enables companies with excess food to hail Copia drivers who pick it up and deliver it to local nonprofits. It’s an efficient, tech-enabled way to solve what Ahmad has called the “most unnecessary problem of our time.”

“Everyone wins,” Ahmad told the Times. “We win because we’re feeding hundreds of thousands of people – including veterans, especially, and children and women. And corporations get to reduce the amount of food that they’re wasting. They reduce disposal costs. They get to feed people directly in their community, which is awesome. And we also help our environment.”

Syndicated with permission from Shareable -- an online magazine that tells the story of sharing that covers people, places, and projects bringing a shareable world to life. The author, Cat Johnson, is a freelance writer focused on community, the commons, sharing, collaboration and music. Publications include Utne Reader, GOOD, Yes! Magazine, Shareable, Triple Pundit and Lifehacker.

There is no neutrality. There is only greater or lesser awareness of one's bias.
Phyllis Rose

We've sent daily emails for over 16 years, without any ads. Join a community of 159,824 by entering your email below.