From the Introduction to John Philip Newell’s Sacred Earth, Sacred Soul:(Celtic Wisdom for Reawakening to the What Our Souls Know and Healing the World) Published by Harper One & Harper Collins UK (July 2021) 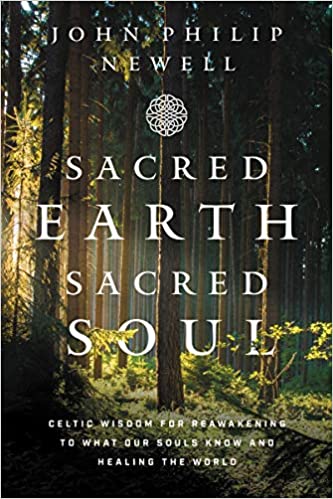 necessarily been taught. And some of this deep knowing may actually be at odds with what our culture or religion or nation has tried to teach us. This book is about reawakening to what we know in the depths of our being, that the earth is sacred, and that this sacredness is at the heart of every human being and life-form. To awaken again to this deep knowing is to be transformed in the ways we choose to live and relate and act.

The problem is that we keep going back to sleep, or otherwise live in ways that neglect this deep knowing. Thus, the crises that we are in the midst of today, whether ecological, political, or societal, stem from the fact that we treat the earth and one another as less than sacred. All these critical issues are interrelated. The way we have wronged the earth is the way we have dishonored the feminine or belittled the “other”, whether that be the “other” nation, religion, race, or sexual orientation. We have fallen out of alignment with the deepest truths within us. How are we to awaken again to the sacredness at the heart of all life, the sacredness that is also at the heart of our own being?

The Celtic spiritual tradition is one that has long emphasized an awareness of the sacred essence of all things. This tradition is in fact part of our Western Christian inheritance, although it has been largely forgotten and at times suppressed. It is this lost stream of wisdom that I will be drawing on in these pages to help us remember. It is a way of seeing, a path of awareness, that can be traced through the centuries, forever unfolding, evolving, emerging again and again to serve a consciousness of the sacred at the heart of all life.

The way of seeing that I am speaking about in this book can be accessed by anyone, regardless of ethnic origin or religious background, for it is a way of seeing that is based on what the soul already deeply knows, that both the earth and every human being are sacred. And we can apply this way of seeing to the most pressing issues of humanity and the earth today.

In the Celtic tradition it was said that we suffer from soul-forgetfulness. We have forgotten who we are and have fallen out of true relationship with the earth and with one another. Thus, the path to wellbeing is not about becoming something other than ourselves or about acquiring a spiritual knowledge that is essentially foreign to us. It is about waking up to a knowledge that is deep in the very fabric of our being, and it is about living in relation to this wisdom.

This knowing may have become buried under layers of cultural and religious conditioning and may need to be awakened. But the wisdom we are trying to give expression to is not just ours alone; it is also our listeners’. Our role is simply to set it free in one another, to bring it back up into consciousness. When we do release in each other a fuller awareness of the earth as sacred and of everything that has been born as holy, we will be changed by this awareness, and we will want to change the way the earth and its life-forms are being treated.

Sacred is the right word to convey this Celtic way of seeing, because it is a word that is not bound by religion. Inside the walls of religious practice, we speak of sacred scripture or sacred music, for instance, but way beyond those walls we also speak of the sacred universe or sacred moments. The word points with reverence to the divine essence of life and the true nature of relationship. When we speak of something as sacred, we are offering it ultimate respect. We are honoring it. We also invoke something of the power and authority of this word when we used the related term sacrilege to speak of the wrongs that are being done to the earth, to the creatures, and to other human beings. Etymologically, sacrilege means to try to take possession of the sacred, to use it for one’s own ends rather than to reverence it.

In Celtic wisdom the sacred is as present on earth as it is in heaven, as immanent as it is transcendent, as human as it is divine, as physical as it is spiritual. The sacred can be breathed in, tasted, touched, heard, and seen as much in the body of the earth and the body of another living being as in the body of religion. It is the true essence of all life.


From the Introduction to John Philip Newell’s Sacred Earth, Sacred Soul:(Celtic Wisdom for Reawakening to the What Our Souls Know and Healing the World) Published by Harper One & Harper Collins UK (July 2021)

Nature is not a place to visit. It is home.
Gary Snyder