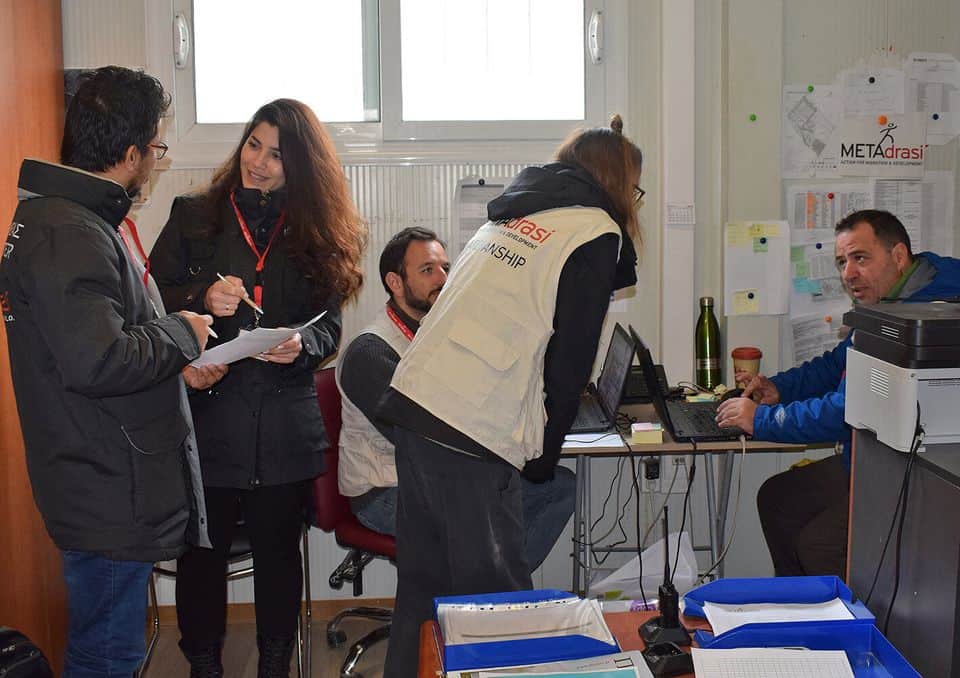 ***
The appointment with Mariam, METAdrasi’s interpreter in Farsi, is early in the morning at Athens airport. She is a sweet and kind colleague with whom I had not had the chance to cooperate in the past. We exchange information and we get organized, while flying to Lesvos. On the island, we head straight to Moria. There, we drop by METAdrasi’s office for a quick “good morning” to our colleagues who offer Interpretation at the Asylum Service, as well as to the authorised representatives/guardians of unaccompanied minors. “You are taking the best kids”, Kyriakos, one of METAdrasi’s authorised representatives/guardians of unaccompanied minors, tells us smiling. “We are always glad when children finally get away from here”, he adds. In Moria’s Reception and Identification Center there is hustle. Countless worn-down people are wandering around, while the newly arrived await to get their data recorded.

We pick up the first two children, Issa and Reza, two brothers from Afghanistan, aged 13 and 15. They reached Lesvos two months ago, together with their older brother, who cannot follow them to the minors’ accommodation facility, as he is over 18. The family will have to be separated again… The expressions of the three brothers make our hearts clench. “I must remain calm” I think to myself. With the interpreter’s help, I explain to the children that they will be staying in a facility where they will have proper care, support regarding asylum procedures and healthcare, as well as the opportunity to go to school. “Don’t worry about your brothers”, I reassure the older brother. “They will be safe and you will be in touch. At the first chance you will meet again”.

The next child we pick up is 16-year-old Kai, originating from Western Africa. He is particularly popular: many friends have gathered to say goodbye. Showing him the Organisation’s vest I wear, I explain to him in English, which he speaks fluently, that I will escort him to a proper accommodation facility. In that moment. I realise that I am asking a boy who has been through so many difficult situations, to trust me, a stranger, to escort him to an unknown place… I speak to him about the better conditions that await him in order to reassure him.

I introduce Kai to Issa and Reza and the children seem to be communicating fine, although they don’t have a common language. We get the children’s few possessions – just one backpack each – and we set off with a minivan for the airport. On the way, we find the time to inform the children with more details on the opportunities they will have at the accommodation facilities, but also on the lurking dangers if they do not keep their distance from all kinds of traffickers that might approach them outside the facilities. 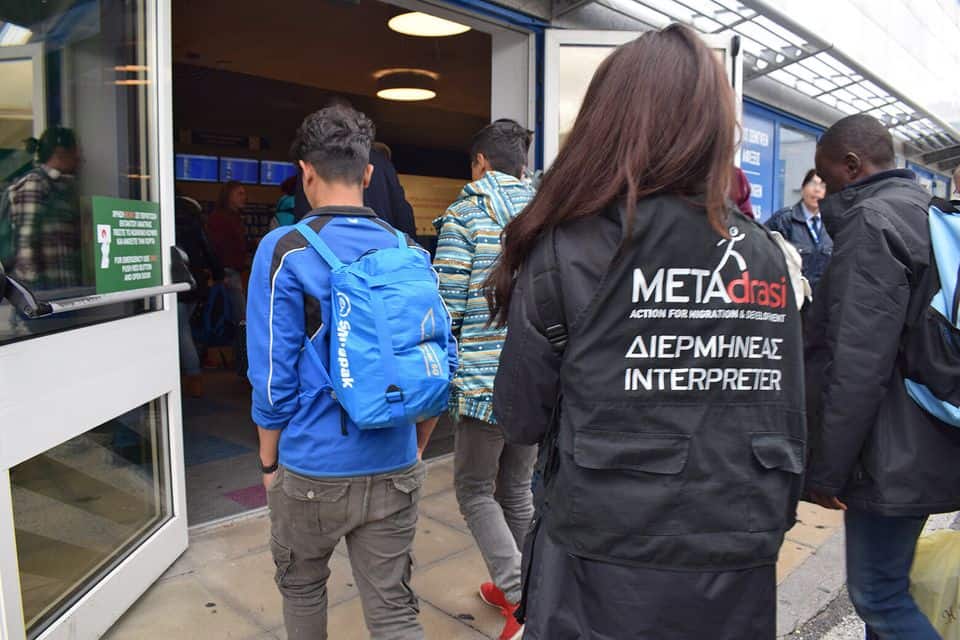 At the airport, the police ask to check thoroughly the three children’s documents, which I had already checked myself when I received them at Moria’s Reception and Identification Center: prosecutors’ orders, departure decisions, asylum applicants’ cards and medical examinations’ results. While I am dealing with the procedures, Mariam makes sure to get something for the children to eat. They do not have any appetite; they must be nervous. Since they arrived in European ground, which happened to be Lesvos, this is their first day of freedom, outside Moria. It is also their first time to travel by airplane.

“During most missions we usually escort at least ten to fifteen children”, Mariam informs me, having participated in dozens of missions as an interpreter. “Most times we travel by boat for many hours, so we have the opportunity to get to know the children, to advise them about their future, to underline the importance of education and to inform them on the dangers that they might face”. 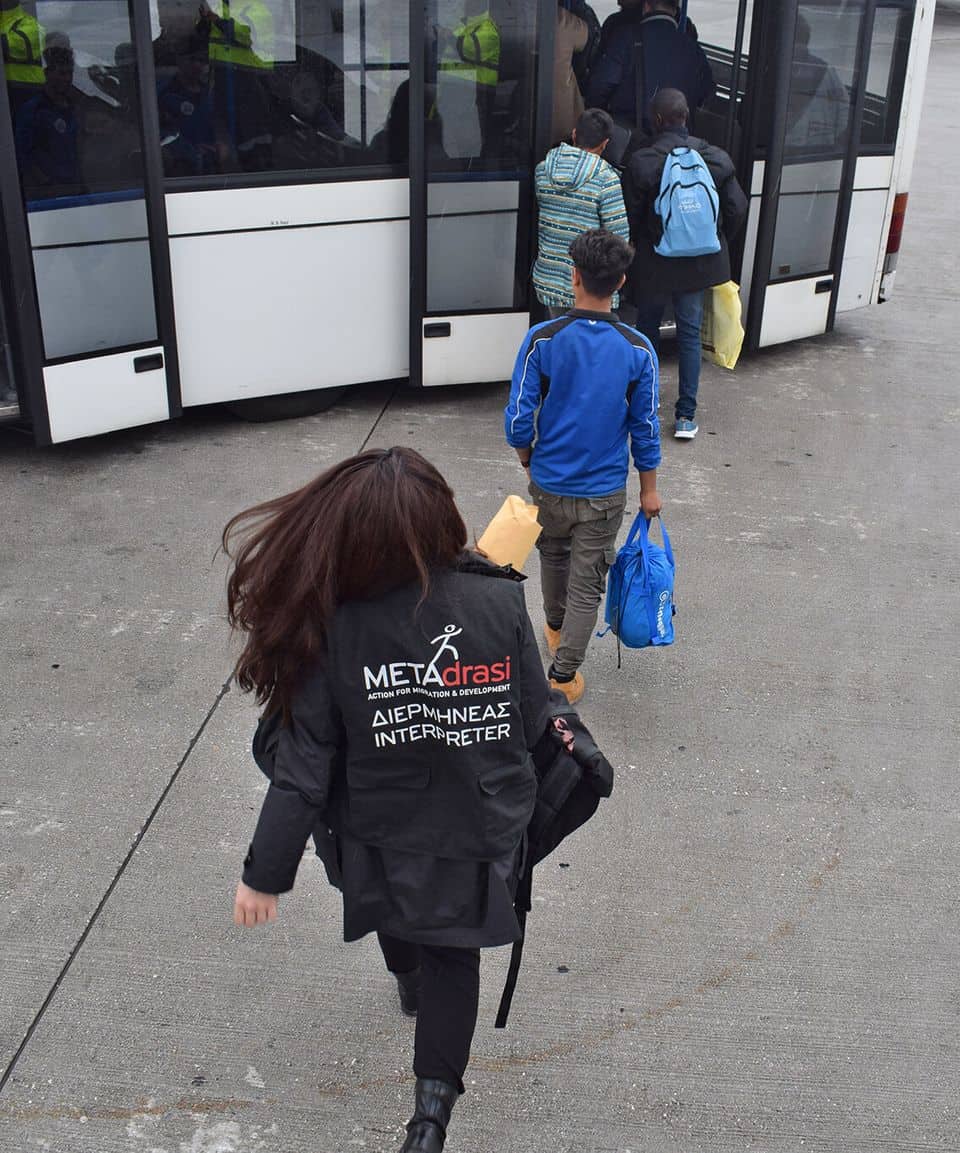 At the Athens airport we meet another METAdrasi’s volunteer escort, who, along with the interpreter, undertakes to escort the two brothers towards the accommodation facility at the center of Athens. Kai and I have one more plane to catch, as his new residence is in Thessaloniki.

According to our schedule, we have three hours before our flight. I offer him something to eat and drink. His appetite remains diminished… I am thinking that this child is about the same age as my daughter. I wonder about his mother. Is she alive? Where could she be? No, I will not ask him about his family, his good and bad memories from home, his journey to Greece, the six months he spent in Moria… I do not wish to make him recall traumatic experiences. 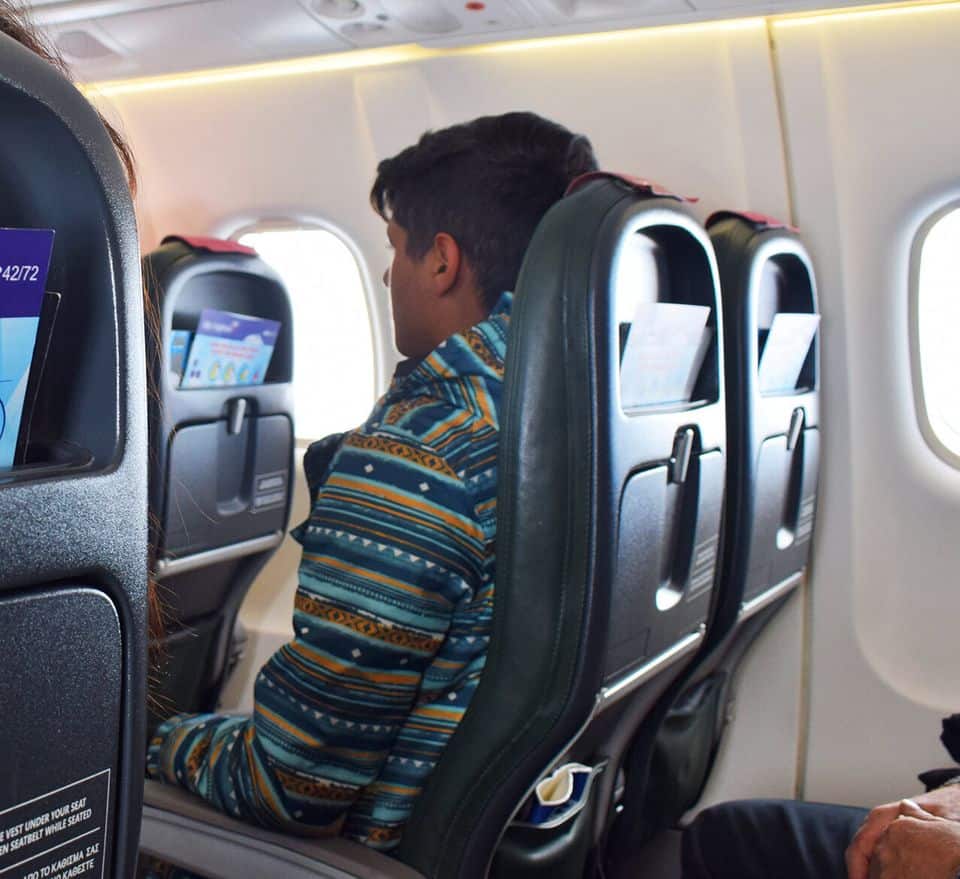 “Do you like football?” I ask him, in order to start a painless conversation. “I like it, but it is not my priority”, he answers with disarming maturity. “I want to become a lawyer”. “I am sure you will succeed”, I answer, impressed by his determination. We spend our time with Sudoku training. I explain the game to him and we play the first game together on my cell phone. I let him solve the next one on his own. Every time he makes a mistake, a red sign lights up and he lets a cry of disappointment. I realise that he does not mind losing. He minds making mistakes. “This child has high demands from himself”, I am thinking. “Do you know anyone in Thessaloniki?” I ask him. “No, no one” he answers. “Don’t worry, you will make friends in the shelter”, I reassure him. I talk to him with enthusiasm about Thessaloniki and the many interesting things he will find there.

Outside the airport, we take a cab to the accommodation facility. “This is a VIP ride for someone important who cancelled last moment. You are lucky, you will have a luxurious transportation without extra charge”, the driver tells us. “You are still transporting an important person”, I answer and I cannot think of anyone else who would take this taxi and would have faced in their life harder challenges than Kai did, remaining so polite and committed to their goal at the same time.

At the accommodation facility reception, Kai meets a group of boys from Africa and his face lights up. He is introduced to everyone and while I take care of the procedures, his new friends offer him an apple which he eats with appetite. I say goodbye with a smile and a wish for him to succeed in his life. The moment of parting is always hard…

Since 2016, METAdrasi’s escorting missions for unaccompanied children are supported by UNHCR, with co-funding by the European Commission. The contribution of volunteers, as well as free transportation offered by Aegean Airlines, Blue Star Ferries and Hellenic Seaways, are also significant.

Children’s data has been altered for their protection.

This article was originally published in Greek in the Huffington Post and was syndicated from METAdrasi.org.

Let your heart guide you. It whispers, so listen closely.
from 'The Land Before Time'