Excerpt from Resilient Threads: Weaving Joy and Meaning into Well-Being, from Chapter 3, “Connecting the Dots.”

A Mother/Physician with the Multiple Hats Syndrome 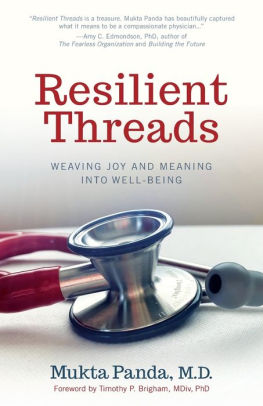 Despite the neighborly support, I was stretched thin with all the hats I wore, striving to perfection in every role: mother, sister, daughter, wife, physician, teacher, friend, colleague, acquaintance, and so on. For seventeen years I left home at six in the morning with both children plus three or four other neighborhood children in the carpool. I’d drop the girls off at the girls’ school, the boys at the boys’ school, then come to work. After a long day at work, I would pick them up and drop them at whatever after-school practice they had, run to the grocery store, pick up some food for them, come back to the office and work until they finished around seven o’clock, then go home and make sure dinner was ready, clothes were ready, homework was done. And I remember being so angry at myself because I would be screaming all the time, “Come on, let’s get to work quickly, get ready!” I’d get up in the morning in a rush and go to bed exhausted completely.

Even though I wanted to create more quality time with my children at the end of each day, I realized I needed to do something to unwind myself first. My best meditation is walking, both the physical act and the time to unwind and reflect. After coming home, especially in summertime, I’d drop everything and tell them, “You do what you need to do, I’m going to go for a walk.” I felt so selfish doing that, but when I didn’t make time for the walks I felt like I was being a horrible mother and just not a good person. When I did make time for myself and walking, my children and I were then able to enjoy our quality time together before their bedtimes. It became a joke in our house when my children were older; if I were really upset they would say, “Mom, is it walk time?”

It wasn’t all bad. On some days, the long commute itself was a great gift. During those years there were no cell phones and no video screens in the car. My kids had a competition about who would sit in the front seat, running to the car to be first. One day when Nik was in third grade, I waited in the droning pick-up line. It was clear that he was in the lead by several car lengths. He jumped in next to me. A moment later Natasha got in the back seat. Breathless and bursting to tell me something, Nik exhaled with, “Mommy, what does the F word mean? Some boys were pointing at that word in a book and laughing. They wouldn’t show it to me.”

His sister let out an agonized moan, “Ooooh, don’t say that word, Nik!”

“Natasha, keep quiet,” I said, emphasizing with my eyes to hers in the rear-view mirror. I was simultaneously trying to move away from the cars behind me, wondering how to approach Nik’s question, and grieving at the inevitable loss of childhood.

Inspiration hit me. “Nik, let me ask you a question. Where do babies come from?” He promptly answered with confidence, “A girl and a boy get married and they pray to God and God sends them a baby.” I held back my tears. What innocence! I wanted to capture that! I knew it would soon be time for me to have the “birds and bees” conversation, but Nik seemed satisfied for the moment. A few weeks later Nik and I had that talk. Except perhaps for book recommendations from friends who are further along on the parenting path, there are just no guidelines to parenting! That day in the car, I was immensely grateful to keep my eyes on the road.

Another afternoon, I heard Natasha talking to her friend who carpooled with us. Her friend was distraught about some mean girls at their middle school. Natasha counseled, “Don’t let all that upset you. Just put it out of your mind and think happy thoughts.”

In that instant, everything changed for her friend, and for all of us in the car. The remainder of the drive was calm and peaceful. I have since adopted my daughter’s example from that day and have made “Happy Thoughts” my mantra.

On any given day, I saw that I could either choose to compartmentalize my life or I could strive to make it as fluid as possible. I can’t say “Ok, now I’m a mother, now I’m a wife, now I’m an educator” and shut down the other aspects of myself. During those years I realized there are times for everything. While I don’t always have to do everything all at once, whatever I am doing has to be done with more intentionality, even if that’s in smaller quantities or for shorter durations.

My son wrote an essay in kindergarten on “My Mother.” It included things like “My mother makes cookies. She takes us out. We swing at the park.” And the last sentence was, “And also my mother is a doctor.”

Balancing Hats in the Workplace

I changed how I wore my multiple hats at work too. Although most waking hours of our day are spent working, we don’t often feel safe in our workplace to speak of anything other than work or to acknowledge that anything is hard outside of work. It really takes courage for a physician (or anyone) to say, “You know what, I need to bring my children here. I’m sorry but I’m drowning in motherhood right now. My child is sick. I can’t concentrate on work. I need to go get my child.” I wondered how we could create spaces at work where it’s safe to be vulnerable and brave.

My daughter was about ten years old when I was a second-year resident. I was working the night call, responsible with another intern. My pager went off at two o’clock in the morning. It was a call from home. I called back and both Natasha and her father picked up. “Mommy where are you? I’ve had a bad dream.” Her father said, “Natasha, go back to sleep. Don’t disturb Mommy.” He said to me, “She’s fine; keep doing what you’re doing.” We hung up. I knocked on the door of the room where the other resident was sleeping and said, “Look, here’s my pager. I’m on call, but I need you to cover my calls.” I drove all the way home, only to find her fast asleep, and then I drove back to work again—all those miles!

Phone calls about my children would also come during the day. I started sharing more about my children with my residents and the nurses. I would oftentimes bring my children to sit in the office area while I was doing work. It gave permission to my coworkers to also talk about their children.

When my son was young, it was a chore to get him out of bed. One day I told him, “I have to shout every day and I don’t like myself when I do that. If this is the case, I’m going to leave you at the house and I’m going to go off to work.” And I did! About an hour later, he woke up and called me, “Mom, where are you?” He was crying. I was crying. I had to tell my colleague, “I need to leave work and go. I’ve done this, and it took courage, but I have to go back and get him.” Nik was never late again. If I hadn’t built that relationship with my colleague, I would not have had the courage to say that.

When I was program director and even more so when I was department chair, I gave the faculty and learners permission to let their family lives be part of their work life. I would say, “It’s okay if you want to bring your kids to work if you have an hour or two when you need to finish up something. This is part of our life; we don’t have to separate it.” We had boundaries, of course, but brave spaces need to be both open and bounded. Having our children there occasionally built a community where colleagues were suddenly there for each other in both personal and professional ways.

Around this time, several of my residents were mothers with newborns, struggling with the overwhelm. That led us to establish an informal support network we called “Mommies in Medicine” that was open to medical students, residents, attendings, private practice physicians, staff, and physicians’ wives. It lasted only a few years, but served those new mothers well. It led to changes such as ensuring that the hospital’s onsite daycare center had room for babies of the residents, so the new mothers could easily drop in.

My parenting was a lived experience. Those times were so meaningful. I’m grateful that my children were able to adjust to how often I was an inefficient and inexperienced mom. I am also happy they saw me at work in my physician-leader role. Those were pivotal years of growth for me where I realized I can’t be a doctor without being a mother, and I can’t be a mother without being a doctor. Both roles are integrated. I can’t separate the two, and perhaps most importantly, I still don’t want to.

As my role of a physician wearing multiple hats expanded further into American health care, the question of “Who am I?” required that I keep exploring to whom and where I belonged—and to continue assessing the cost.


Mukta Panda, MD, MACP, FRCP-London, is an award-winning physician, speaker, and facilitator whose work seeks to transform the heart of patient care and medical education. She serves as the Assistant Dean for Well-Being and Medical Student Education and a Professor of Medicine at the University of Tennessee College of Medicine at Chattanooga. Her new book is “Resilient Threads: Weaving Joy and Meaning into Well-Being.” Mukta also co-authored the new Oath to Self-Care and Well-Being that supplements the Hippocratic Oath.  To rejuvenate, Mukta likes to take long walks, cook good Indian meals, and plan surprise parties for loved ones. Visit her online at www.MuktaPandaMD.com and follow her on Twitter @MuktaPandaMD.

As I grow older, I pay less attention to what men say. I just watch what they do.
Andrew Carnegie