Home > News > My Summer of the Catbird

My Summer of the Catbird

Living, as too many of us do, separated from  Nature, we forget that we are supported on this planet only insofar as we remain connected in relationship to Earth and all of her creatures. John Muir understood this deeply. He encouraged people to “stay close to Nature’s heart” for healing and solace. It takes patience, quiet, and a willingness to step away from the pull of technology to find the heart of Nature in real time.  He saw how Nature has been sustained over eons through storms, floods, and fires, but she will “not be saved from fools” – meaning humans who have lost their relationship with Life. This is a problem for our age and will define how well humans survive on this planet in the decades going forward.  On a personal level,  the importance of this life-giving relationship with Nature was brought home to me several years ago and has remained with me to this day. 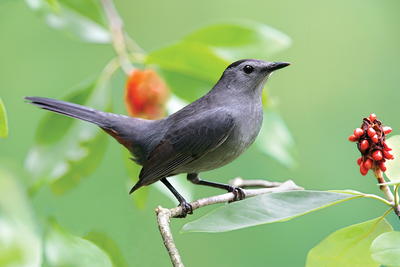 The summer of 2017 was a tough but transformative one for me. I had lost my husband of 30 years in 2015 and was just beginning to come out of the fog of grief. My three adult daughters were thriving and off on their own. I was no longer a wife, caregiver to an ill husband, or the mother of growing children.  I wondered how to carry on without a spouse or children to nurture. I found myself pondering what the purpose in living was when all identities and attachments to people or to a place no longer made it a home?   I knew I had to find a new life after dying to who I had been before.  I had gone on a Buddhist retreat the summer before to delve into the meaning of life, impermanence, and love, but this summer--2017-- I sensed I had to stay home and find myself there. Intuitively I knew that what I needed, what would sustain me in the life that wanted to geminate in the darkness, was right within me and in the circumstances I found myself within.

Often sleepless during that summer with wondering about these questions and the direction of my life, I would wake at dawn as the first light of morning came into the sky at 4:45 am and hear the calls of birds as they woke with the sun.  One bird, a catbird, stood out from all of them because he had built a nest in the burning bush below my bedroom window.  The catbird is a dark gray bird that is similar to the mockingbird because of its habit of imitating other bird songs. It travels from wintering grounds in the southern US or Central America to nest in North America. Like a true homebody, bird banding data has shown that some catbirds have returned to the same neighborhoods, and even the same yards, year after year. While the catbird imitates the calls of other birds, it does so less perfectly than the mockingbird as it interjects some of its own melodies. The one song that the catbird calls its own is the familiar and catlike “mew,” but other than that, the calls are from other birds, other songs that it has taken a liking to.  You get a sense that it is singing not for a perfect imitation but for the pleasure of blending songs to make up its own version.  So with my catbird, he would begin his song below my window and go on for an hour at least. The female would call softly to him in shorter and less obvious calls. In my unraveled and stressed state of mind that led to insomnia, I was enchanted by his serenade.  I would secretly lift the screen on my window and watch him on the chain link fence near the bush.  He would cock his head to watch me too, then go on with his song. That summer, I was awakened over and over again and carried through the lessons of my life by his song.

This singing lasted well into August after the nest had been emptied. Even after the busyness of raising a family and countless hours of feedings, he would continue to sing in the mornings and again in the evenings. When the fledglings had gone off on their own, he would still return each night to sing again and roost in the bush for the night. I imagined the place held happy memories of the early days of nesting. I felt a kinship with this bird that was the closest friend I had that summer. Somehow I felt certain he knew what I was feeling and would sing those feelings for me in ways I couldn't articulate on my own. I grew to depend on that bird to help me search out the meaning of my life and faith. Is there one answer for anything? Is there one direction, purpose, life, or faith that I could hold onto as my own? Could I find peace in blending the selves I had been and the diverse faiths I had loved?  I worried over this in my morning insomnia, but the catbird eventually calmed me and led me to new answers and a deeper peace about myself.

I gradually saw that the catbird didn't worry about these things. The bird made up his song taking what was beautiful for him in the songs of other birds and lived where he wanted to in his own way.  It seemed to be telling me, teaching me, that I could blend my life into a whole new meaning that was uniquely mine.  I could blend the many faiths of the earth into a song of living that honored the spiritual richness of each religion, but add in tones of my own to make it unique. In a world gone crazy with religious fundamentalism on every continent, it was absolutely hopeful to learn from this bird that I could create an amalgam of faith that honored all the expressions of the Divine.  I learned that I could live knowing that lost love lives forever in the heart even as I moved on to new beginnings and new relationships that might attach me to new people and places. And I came to know that even as things change, there is a “staying with” that is part of the process of letting go.  The catbird taught me to feel at peace about returning to the same place each night to find comfort in the memories still lingering there until a new season called me to move on in new directions.

The catbird eventually migrated south in September as the nights grew cooler and the days shortened.  I missed him deeply but felt grateful for all that I had been given. My heart was changed by that bird. There was no greater spiritual pilgrimage or teacher that summer, no better friend.

Virginia May-Schiros has been teaching children with special needs for 25 years. In addition to being a DailyGood writer she is an active volunteer in her local community where she gardens, serves the homeless, leads walking pilgrimages and more.

Some people are so afraid to die that they never begin to live.
Henry Van Dyke

We've sent daily emails for over 16 years, without any ads. Join a community of 243,021 by entering your email below.