Home > News > Where Wonder Lives: Practices for Cultivating the Sacred in Your Daily Life

Where Wonder Lives: Practices for Cultivating the Sacred in Your Daily Life

From the beginning, human beings have so 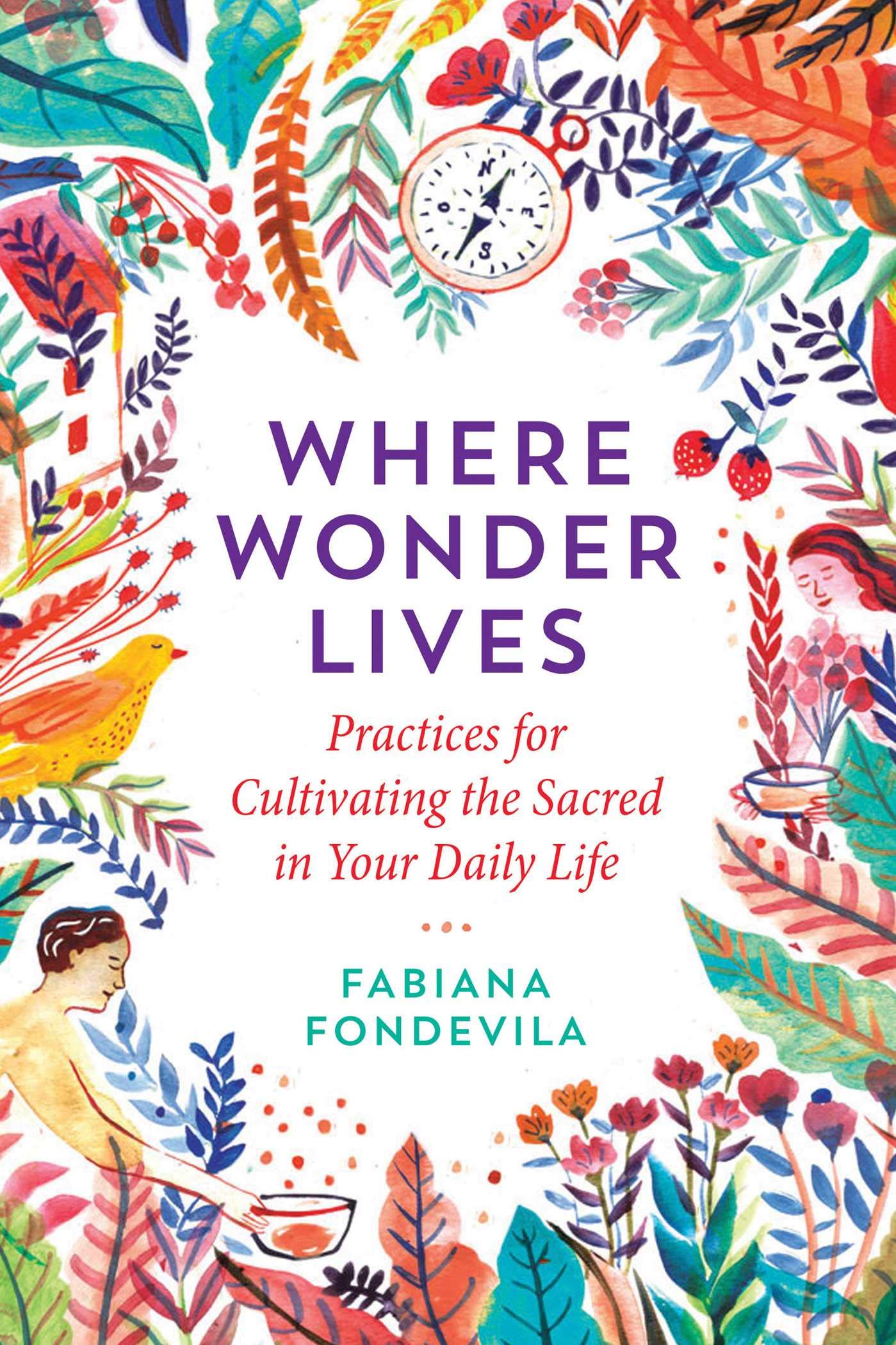 ught to understand the laws that govern the universe, their role in the great cosmic orchestra and   of an existence marked by the constant interplay of joy and pain,beauty and abomination, amazement and anguish, life and death.

Early on, this search for meaning led humanity to explore the spiritual dimension. This exploration took two main paths, following the two movements described by Plato and the Neo-Platonists: an ascending directionality, which follows matter to spirit; and a descending path,which goes from spirit to matter. According to this vision, the cosmos a multidimensional whole, composed of ascending and descending currents of divine love.

The people and traditions that adopted the ascending course—the monotheistic religions (with notable exceptions, such as the mystic Saint Francis of Assisi)—sought spirit in the lofty heights of existence and prioritized“masculine” values and aspirations such as pure light, vision and the transcendent. Through prayers, fasts, meditations and austere lifestyles,these traditions sought to leave behind the imperfect world of form to focus on the eternal source of everything that exists.

On the other hand, the people who adopted the descending vision—the pagan, shamanic, predominantly matriarchal cultures—found the divine reflected in every leaf and creature. They cultivated feminine values, privileging what binds us together, the earthly and the immanent. Rather than aspiring to enlightenment, these people delved into the underworld, which is the realm of the soul.
What is the soul in this conception? It is the primitive and essential core of our individuality, the portion of spirit that lives in us and adopts our peculiar characteristics—those that distinguish us from all others.

The descending journey plunges into the depths, in search of that particular expression of the sacred that is you. It explores our animal nature, our deepest fears, our dialogue with death and disease, our experience of sexuality, our desires, our creations, our dreams, our unconscious and its symbols.

This is how the brilliant Jungian psychologist James Hillman defines the difference between spirit and soul: Soul likes intimacy, spirit is uplifting. Soul gets hairy; spirit is bald. Spirit sees, even in the dark; soul feels its way, step by step, or needs a dog. Spirit shoots arrows, soul takes them in the chest. William James and D. H. Lawrence said it best. Spirit likes wholes. Souls like eaches.

In his book Soulcraft: Crossing into the Mysteries of Nature and Psyche,depth psychologist and wilderness guide Bill Plotkin gives a more formal definition:

Where soul is associated with the many earthly mysteries, spirit is associated with the one heavenly bliss. Soul opens the door to the unknown or the not-yet-known, while spirit is the realm of beyond knowledge of any kind, consciousness without an object. Soul is encountered in the subconscious (i.e., that which lies below awareness),while spirit is apprehended in states of super-consciousness. Both are associated with states of ecstasy (i.e., outside the ordinary), but the encounter with soul is characterized by dreams and visions of personal destiny, while spirit realization engenders pure, content-free awareness.

The two paths—ascending and descending—complement and complete each other. Each, in itself, offers a partial experience of the divine. However,since the advent of modernity the downward path has been discouraged, if not downright forbidden. Says Plotkin, again:

Perhaps our religious and political forefathers were afraid of the influences of nature and soul, steered us away from the wild, and tried to control or destroy wildness wherever it might be found. Fear of nature and soul is a fear of our own essence.

Through this split vision, the Earth and its creatures lost their divine status. The schism worsened in the 18th century, with the advent of rationalism. Without wanting to minimize the progress brought by this stage of development, it also appointed the intellect as the new divinity and dismissed all other forms of knowledge as mere superstition. The wisdom of indigenous peoples, based on intuition and dialogue with the forces of nature, was denied, or attributed to an infantile stage of human consciousness.

The myth of unlimited scientific and industrial progress, with its view of nature as a resource to be exploited, became dominant and today threatens to destroy the planet. The rejection of matter—first from a spiritual standpoint,then an intellectual one—gave way, paradoxically, to an age of unprecedented materialism.

This change of outlook impoverished our experience of the world: we lost the capacity to dialogue with other species, to recognize ourselves in the rhythms and cycles of nature, to feel comfortable in our bodies and with the bodies of others; in short, to belong.

In the second half of the 20th century, the New Age movement brought winds of change, espousing an environmental, feminist, libertarian and progressive agenda. It was a necessary turning point, fueled in part by the influence of Eastern wisdom reaching the West, and the meeting of two worlds. However, over the decades it ended up feeding the antagonism,by prioritizing transcendence as the only way to access spirit. One of the most visible results of this preference is the phenomenon that the author Robert Augustus Masters has baptized “spiritual bypassing”: the propensity to want to solve physical or psychological problems solely by resorting to spiritual (meditative, contemplative, energetic) practices; that is, using these practices as if they were shortcuts to healing. Those who fall into this confusion can avoid consulting a medical professional for serious physical symptoms; repress emotions such as anger or fear because they consider them “unspiritual”; endure abuse in the name of a misunderstood“compassion”; or avoid difficult but important conversations for the sake of maintaining peace.

Another aspect of the same phenomenon is what Buddhist teacher Chögyam Trungpa named “spiritual materialism”: the use of spirituality to achieve personal goals in the world, which ultimately denaturalizes it.

Authors such as Ken Wilber, founder of integral thinking, warn that decades of Buddhist practices for building detachment and equanimity have done little to foster the psychological and emotional maturity of practitioners. In other words, no matter how hard someone strives for peace and discipline in the dojo, temple or weekend retreat, if they do not work actively to solve their work, family or personal problems, if they do not examine their shadows and take care of the mundane details of their existence, then their efforts in pursuit of enlightenment will be in vain.

Proof of this is provided by the scandals that shook the North American Buddhist community when gurus from remote monasteries, who had had little or no contact with money, women or sexuality, arrived in the United States and found themselves surrounded by a world of unknown temptations.
Is it any wonder they committed adolescent blunders, and even erred into abuse? Wilber cautions: it is not enough to wake up; it is also necessary to grow up.

Thomas Moore, author of the best-seller Care of the Soul, also distrusts a spirituality that only favors transcendence at the expense of the earthly: If we define our spirituality only in positive and glowing terms, it will become sentimental, and then it is of no use. To be spiritual is not just to pray and meditate but also to be involved in the struggles of marriage,work, and raising children; in social responsibility and in the effort to make a just and peaceful world.

In this worldview, “spiritual activism” is not a contradiction in terms but a concrete expression of love in action.

The truth is that we need both: the ascending path, which seeks the source through vision, wisdom and detachment; and the descending path,that finds the divine here on Earth and strives to express it through service,generosity and compassion.

In our lives, we naturally move from one polarity to the other: we seek out silence in search of inspiration and contentment; then we return to the world and share that peace with our community. Or, conversely: we experience some mundane event—a friend who offers help; a sky strewn with stars; a bird that feeds its young—and that propels us straight into the mystery.

We need to embrace the multidimensionality of life: to match light with shadow; being with doing; giving with receiving; spiritual elevation with psychological and emotional maturation. Recovering the feminine  face of the sacred is a way to correct the imbalance and give the world the food for which it has longed for centuries: the sacred marriage that integrates opposites and brings us integrity. That very same longing inspires these pages.

Excerpted from the upcoming book, Where Wonder Lives: Practices for Cultivating the Sacred in Your Daily Life to be published January 2021. Fabiana Fondevila is an author, storyteller, ritual maker, activist, and teacher from Buenos Aires, Argentina. She has spoken alongside figures of international renown, such as Matthieu Ricard and Brother David Steindl-Rast. Fabiana’s seminars weave together nature exploration, dreamwork, mythic consciousness, archetypal psychology, social work, and essential emotions such as awe, gratitude, and enchantment.

Boredom is the conviction that you can't change ... the shriek of unused capacities.
Saul Bellow