BY PAUL MORROW
Syndicated from theconversation.com, May 28, 2022
6 minute read

Whether in war-torn Ukraine, Laos or Spain, kids have felt compelled to pick up crayons and put their experiences to paper 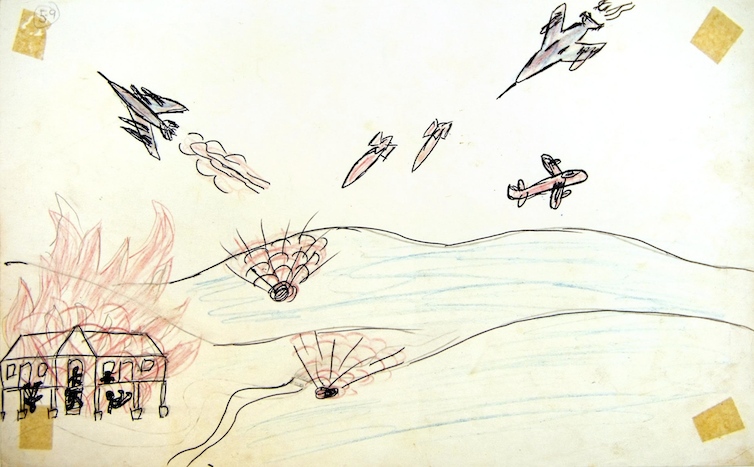 In 1970, a 16-year-old Laotian boy drew a picture of his school being bombed. ‘Many people’ died, he wrote, ‘But I didn’t know who because I wasn’t courageous enough to look.’ Legacies of War, CC BY-SA

So wrote the editors of an influential collection of children’s art that was compiled in 1938 during the Spanish Civil War.

Eighty years later, war continues to upend children’s lives in Ukraine, Yemen and elsewhere. In January, UNICEF projected that 177 million children worldwide would require assistance due to war and political instability in 2022. This included 12 million children in Yemen, 6.5 million in Syria and 5 million in Myanmar.

The Russian invasion of Ukraine in February 2022 added 7 million more children to this number. To date, more than half of Ukraine’s children have been internally or externally displaced. Many more have faced disruptions to education, health care and home life.

And yet they, too, still draw pictures. In March, a charity called UA Kids Today launched, offering a digital platform for kids to respond with art to Russia’s invasion and raise money for aid to Ukrainian families with children.

As a scholar who studies the ways wars affect societies’ most vulnerable members, I see much that can be learned from the art created by kids living in war-torn regions across place and time.

A century of children’s art

During the Boer War – a conflict waged from 1899 to 1902 between British troops and South African guerrilla forces – relief workers sought to teach orphaned girls the art of lace-making. During World War I, displaced children in Greece and Turkey learned to weave textiles and decorate pottery as a means of making a living.

Over time, expression has replaced subsistence as the driver of children’s wartime artwork. No longer pressed to sell their productions, children are instead urged to put their emotions and experiences on display for the world to see.

Novelist Aldous Huxley hinted at this goal in his introduction to the 1938 collection of Spanish Civil War art.

Whether showing “explosions, the panic rush to shelter, [or] the bodies of victims,” Huxley wrote, these drawings revealed “a power of expression that evokes our admiration for the childish artists and our horror at the elaborate bestiality of modern war.”

Herbert Read, a World War I veteran and educational theorist, organized another show of children’s art during World War II. Unlike Huxley, Read found that scenes of war did not dominate the drawings he collected from British schoolchildren, even those exposed to the London Blitz. In a pamphlet for the exhibition, he highlighted “the sense of beauty and the enjoyment of life which they have expressed.”

While the shows discussed by Read and Huxley differed in many ways, both men emphasized the form and composition of children’s artwork as much as their pictorial contents. Both also expressed the view that the creators of these drawings would play a critical role in the rebuilding of their war-torn communities.

As with the children’s war art made during Huxley and Read’s time, the images coming out of Ukraine express a mix of horror, fear, hope and beauty.

While planes, rockets and explosions appear in many of the pictures uploaded by UA Kids Today, so do flowers, angels, Easter bunnies and peace signs.

The managers of this platform – who are refugees themselves – have not been able to mount a physical exhibition of these works. But artists and curators elsewhere are beginning to do so.

In Sarasota, Florida, artist Wojtek Sawa has opened a show of Ukrainian children’s art that will be used to collect donations and messages from visitors. These will later be distributed to displaced children in Poland.

The War Childhood Museum, based in Sarajevo, Bosnia-Herzegovina, had recently concluded traveling exhibitions in Kyiv and Kherson when the Russian invasion started. The museum’s managing director, who has spoken out strongly about the need for cultural heritage protection in war, was able to retrieve several dozen artifacts from these shows a few days before the fighting commenced. Those toys and drawings, which tell the story of children’s experience during Russia’s previous effort to gain control of the Donbas region in 2014, will be featured in shows opening elsewhere in Europe in 2022.

By capturing the attention of journalists and the public, these exhibitions have been used to raise awareness, solicit funds and inspire commentary.

However, children’s art from Ukraine has not yet played a role in political deliberations, as it did when peace activist Fred Branfman shared his collection of drawings by Laotian children and adults during his 1971 testimony before Congress on the “Secret War” the U.S. had been conducting in Laos since 1964.

Nor is it yet clear whether this art will play a part in future war crimes trials, as the art of Auschwitz-Birkenau internee Yahuda Bacon did during the 1961 trial of Adolf Eichmann. 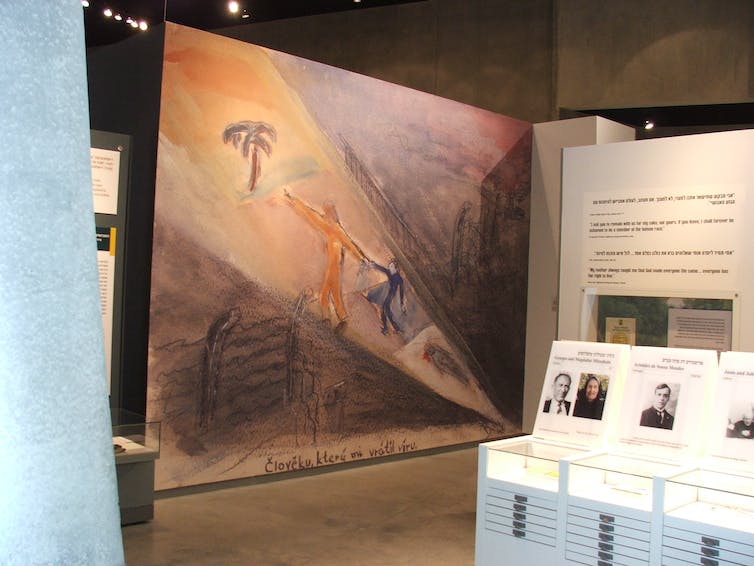 Art historians once thought children’s drawings, no matter where they lived, revealed the world in a way that was unshaped by cultural conventions.

But I don’t believe that children in all countries and conflicts represent their experiences in the same way. The drawings of children imprisoned in Nazi concentration camps during World War II are not formally or symbolically interchangeable with drawings made by children exposed to America’s bombing campaign in Laos. Nor can these be interpreted in the same way as images produced by Ukrainian, Yemeni, Syrian or Sudanese children today.

To me, one of the most valuable features of children’s art is its power to highlight unique aspects of everyday life in distant places, while conveying a sense of what can be upended, lost or destroyed.

A Laotian child’s drawing of a horse that “ran back to the village” from the rice field after its owner was killed by a bomb offers a small window into the lives of subsistence rice farmers. The desert landscapes and urban architecture of Yemen are equally distinctive, and Yemeni children’s drawings highlight those differences even as they express aspirations that viewers around the world may share. 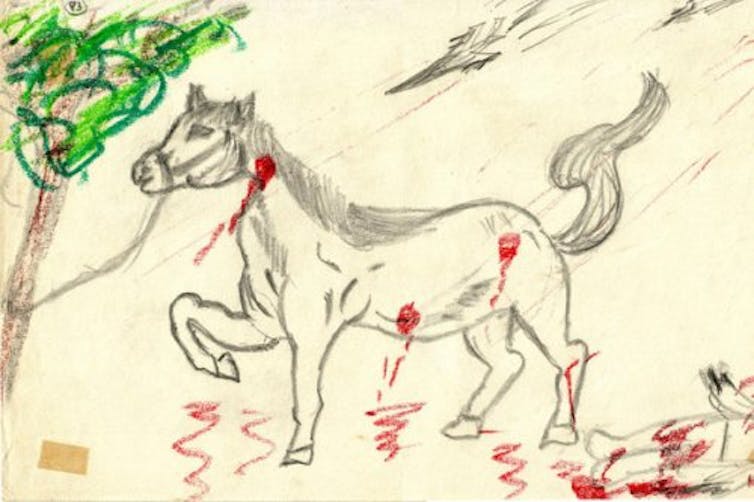 ‘I am a child of my village,’ the 14-year-old Laotian artist wrote. ‘I once saw a horse of great size and goodness. A man had ridden to the rice field and was hit by the airplanes. Only the horse ran back to the village.’ Legacies of War., CC BY-ND

The challenges of preservation

As an academic who has also worked in museums, I am always thinking about how artifacts from today’s conflicts will be preserved for exhibition in the future.

There are significant challenges to preserving the drawings and paintings young people produce.

First, children’s art is materially unstable. It is often made on paper, with crayons, markers and other ephemeral media. This makes it dangerous to display originals and demands care in the production of facsimiles.

Second, children’s art is often hard to contextualize. The first-person commentaries that accompanied some of the Spanish Civil War drawings and most of the Laotian images often provide details about children’s localized experience but rarely about the timing of events, geographic locations or other crucial facts.

Finally, much children’s war art suffers from uncertain authorship. With few full names recorded, it is hard to trace the fates of most child artists, nor is it generally possible to gather their adult reflections on their childhood creations.

By noting these complications, I don’t want to detract from the remarkable fact that children still draw pictures during war. Their expressions are invaluable for documenting war and its impact, and it’s important to study them.

Nevertheless, in researching children’s art, it is necessary to reflect that scholars and curators are – like the child artists themselves – often working at the limits of their knowledge.

This article is republished from The Conversation under a Creative Commons license. Read the original article.Paul Morrow is a Human Rights Fellow, University of Dayton