Home > News > The Gifts of Imperfection 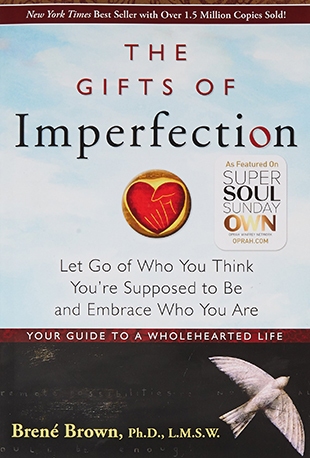 "Resilience — the ability to overcome adversity — has been a growing topic of study since the early 1970s. In a world plagued by stress and struggle, everyone from psychologists, psychiatrists, and social workers to clergy and criminal justice researchers want to why and how some folks are better at bouncing back from hardship than others. We want to understand why some people can cope with stress and trauma in a way that allows them to move forward in their lives, and why other people appear more affected and stuck.

"As I collected and analyzed my data, I recognized that many of the people I interviewed were describing stories of resilience. I heard stories about people cultivating Wholehearted lives despite adversity. I learned about people's capacities to stay mindful and authentic under great stress and anxiety, and I heard people describe how they were able to transform trauma into Wholehearted thriving.

"It wasn't difficult to recognize these stories as tales of resilience because I was in graduate school during the heyday of resilience research. I knew these narratives were threaded with what we call protective factors — the things we do, have, and practice that give us the bounce.

"What Makes Up Resilience?

"If you look at the current research, here are five of the most common factors of resilient people:

"1. They are resourceful and have good problem-solving skills.

2. They are more likely to seek help.

3. They hold the belief that they can do something that will help them to manage their feelings and to cope.

4. They have social support available to them.

5. They are connected with others, such as family or friends.

"Of course, there are more factors, depending on the researchers, but these are the big ones.

"At first, I hoped the patterns that I observed in my research would lead to a very straightforward conclusion — resilience is a core component of Wholeheartedness — just like the other guideposts. But there was something more to what I was hearing. The stories had more in common than just resilience; all of these stories were about spirit.

"According to the people I interviewed, the very foundation of the 'protective factors' — the things that made them bouncy — was their spirituality. By spirituality, I'm not talking about religion or theology, but I am talking about a shared and deeply held belief. Based on the interviews, here's how I define spirituality:

"Spirituality is recognizing and celebrating that we are all inextricably connected to each other by a power greater than all of us, and that our connection to that power and to one another is grounded in love and compassion. Practicing spirituality brings a sense of perspective, meaning, and purpose to our lives.

"Without exception, spirituality — the belief in connection, a power greater than self, and interconnections grounded in love and compassion — emerged as a component of resilience. Most people spoke of God, but not everyone. Some were occasional churchgoers; others were not. Some worshipped at fishing holes; others in temples, mosques, or at home. Some struggled with the idea of religion; others were devout members of organized religions. The one thing that they all had in common was spirituality as the foundation of their resilience.

"From this foundation of spirituality, three other significant patterns emerged as being essential to resilience:

3. Letting go of numbing and taking the edge off vulnerability, discomfort, and pain"

Syndicated from Spirituality & Health magazine. S&H was founded in 1998 for people seeking holistic health in body, mind, and spirit. It aspires to help guide the journey to self-knowledge, authenticity, and integration. Its articles draw from the wisdom of many traditions and cultures, with an emphasis on sharing spiritual practices, and look to science to help provide a context for the spiritual quest. Read more from Spirituality & Health here.

I believe a leaf of grass is no less than the journey-work of the stars.
Walt Whitman