Home > News > As A Doctor, I Am Looking to Make Common Cause

As A Doctor, I Am Looking to Make Common Cause 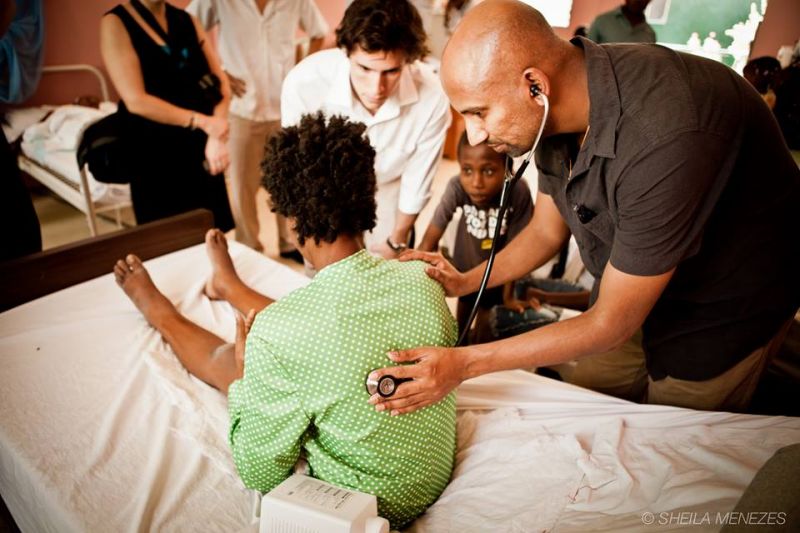 In residency, I trained at a county hospital in Los Angeles. Black and brown patients lay on gurneys in the emergency room, and lined the halls on the wards. Our patients were mostly poor, often undocumented. The doctors were mostly white.

One of my Guatemalan patients told me that on the difficult month-long walk into the US, with blisters and diarrhea, our hospital was known as the first place to get decent, free care.

As residents, we worked and lived in the hospital so many nights. It felt like home.

On one of my days off, in street clothes, jeans, and a T shirt, I went into the hospital to finish dictating some patient notes. It was morning. There was a metal detector coming into the hospital. I collected my stale coffee from the cafeteria. Later that morning, I got stopped by a police guard coming out of the bathroom, suspicious I might have been shooting up in one of the bathroom stalls. I presented my doctors ID out of my jeans pocket and immediately apologies flowed, like water from an open faucet from the mouth of the police guard.

My dark skin is so much like my patients.  I learned never to walk the hospital without an ID. Until then, the hospital had felt like home. It was not a home where I could move freely without question. It was not my home.

A few months later, after a long call shift, I decided to drive to the ocean. Making my way to the water feels like making my way home. This is a habit of mine. The air by the water is fresh and clean and welcoming and opens the lungs after 30 continuous hours in the hospital.

The neighboring cities of Redondo Beach, and Hermosa Beach, are beautiful, with strips of bars and flocks of white folks that flood them in the evening hours. It's 11 pm on a Thursday and the beach front parking is full. I want to bypass the crowds and the bars and go sit on the beach to clear my head.

As I circle for parking in my sister’s black, beat-up 2004 Jetta, I can see a cop car eye me as I come around the block again not finding parking.

My black, beat-up car and my nearly black skin in this dark night.

My third time around the block, the cop starts to follow me on my parking search, a slow dance around a three block radius. He pulls me over.

The cop is rude. He flashes his light onto the back seat where he suspiciously eyes an ophthalmoscope and reflex hammer.  He shines the light in my eyes and asks what the paraphernalia in the back seat is all about.

He doesn't give me a chance to answer. He asks for my drivers license and registration and proof of insurance, his voice finding its footing somewhere between irritated and angry.

I am nervous. I lived in NY on 9/11 and immediately after, I saw fear in older white women's eyes as they looked at me. It is a look I recognize in my dying patients - the fear - but it always catches me off guard when I look in someone’s eyes and realize I am the thing they fear.

Back in the Jetta, My white coat hangs off the back of my driver’s seat. My doctor ID hangs off my white coat close to the drivers’ side window. The policeman's flashlight catches the ID and he asks if I am a doctor. I say yes, at the LA county a few miles away.

The pile of papers in his hand, drivers license, registration, proof of insurance, become like a lotus flower as he opens his palms and they flow back to me.

My doctors ID becomes a get out of jail free card. An I exist card.

I exist. I exist. Something to distinguish me from the black the brown, the sick the poor, the nameless, the undocumented. From my patients.

I remember taking care of an undocumented Mexican man who worked and worked for four decades in the vineyards of Napa. He never had health insurance. I saw him in the hospital when his bone marrow finally failed, exhausted by decades of field work. His body was announcing its existence the only way it could.

If the soul is ignored long enough, the body rebels. A mass in the throat rises to the surface of the skin. A cavity of a lung, riddled with tuberculosis starts to bleed. The body announces its existence.

Sometimes when I fill out death certificates I wish I could write the cause of death as poverty. Or American racism.

As a doctor, I am looking to make common cause with Navajo woman. Uranium mined from the earth and left bare for Navajo folks to fall ill. The uranium in the earth rises as a lump in a Navajo woman’s breast.

As a doctor, I am looking to make common cause with black boys stopped by the police, shot by police without a doctors ID to protect them.

My patients where we work in Liberia. I am looking to make common cause with the 11,310 black bodies who died from Ebola! They came into our awareness only in sickness and in death.

Before blood flows from every orifice, can we note their existence?

The 109 black bodies killed by the police this year.

May we learn their names in life. They exist.

As a doctor, I aim to stand with them before the beautiful fire of their lives becomes ash.

In this country, the only way I know home is through them.

I aim to reclaim a space for home for the black, the brown, the nameless, my patients, myself. I try to find my home through them.

For more inspiration from Sriram Shamasunder:

Whose Suffering Matters Less and Why?

A Doctor's Notes on Hurt & Healing in Haiti


Sriram Shamasunder, MD, DTM&H is an Assistant Clinical Professor of Medicine at UCSF, and co-founder of Heal Initiative. He completed his Internal Medicine residency at Harbor UCLA. He has worked extensively in Rwanda, Liberia, Haiti, Burundi, and India. Recently, he was awarded a Fulbright Scholarship where he studied implementation in resource-poor tribal areas in rural India. In 2010, he was named an Asia 21 fellow as well as the Northern California Young Physician of the Year. He continues to work with Partners in Health (PIH) several months a year.

Dancing is poetry with arms and legs.
Charles Baudelaire