Home > News > The Soil's Story is the Story of Us

The Soil's Story is the Story of Us 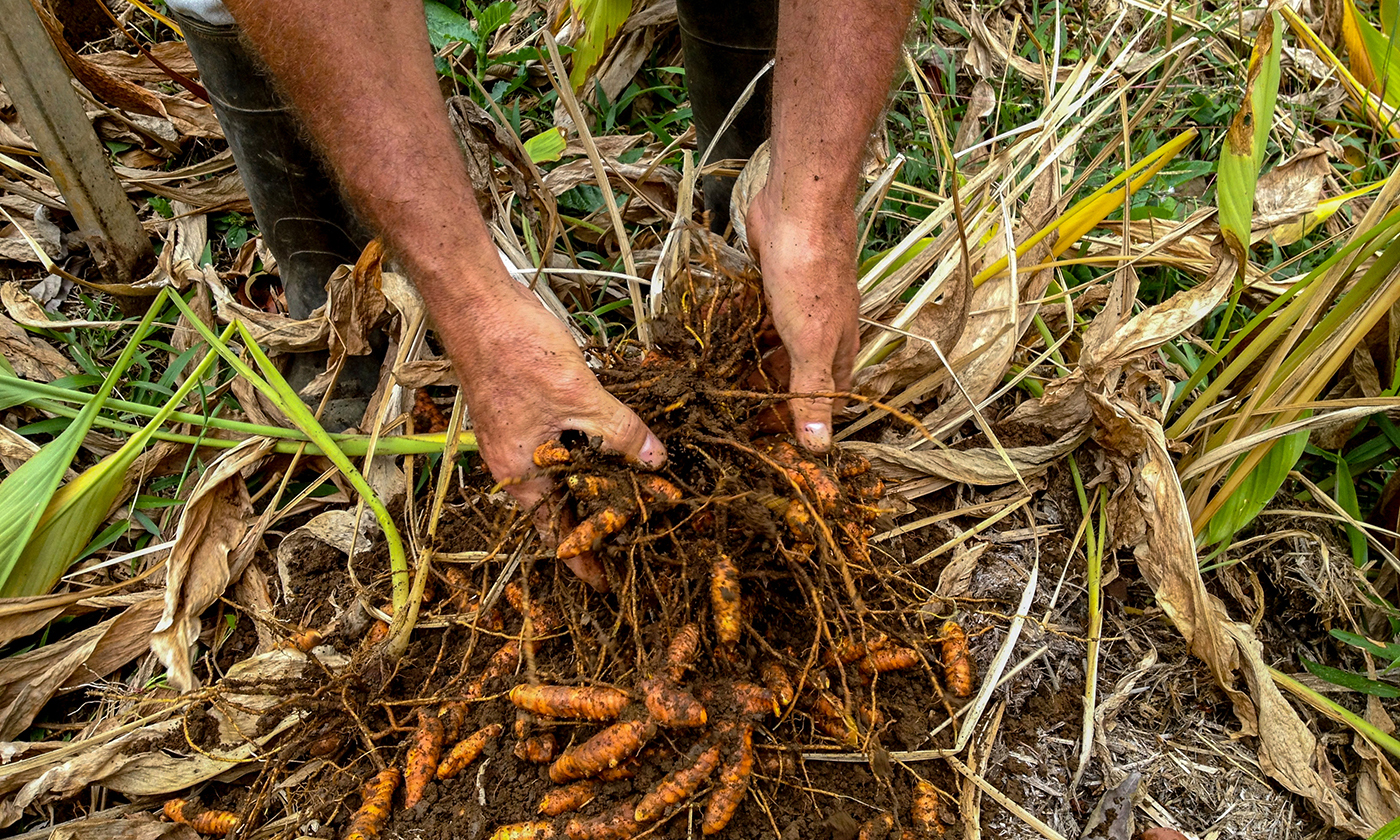 Wendell Berry called it “the great connector of our lives, the source and destination of all.” Ninety-five percent of our food is grown in it, it stores and filters our water and provides a home for the majority of life on the planet, and yet most of us rarely pay much attention to it. We dump poisonous chemicals on it, inject it with synthetic nutrients, slash it with plows, strip it of its natural diversity, and bury our trash in it. But soil has a story to tell us, and we are all a part of it. For as long as humans have engaged in agriculture, and even before, we’ve relied on healthy soil and the organisms it supports. And for most of that time, we’ve cultivated good soil. Early societies developed food production systems that actually enhanced soil fertility and food abundance, such as with “terra preta,” or Amazonian dark earth, and the food forests of the Mayans. We planted, harvested, and consumed but also took care to nourish and regenerate. What changed? At some point, humans started relating to the planet differently, and our emotional and spiritual connection to the earth was severed. Whether the shift happened during the Neolithic Revolution, when humans settled and established agriculture, or the Age of Enlightenment, when nature became viewed as an object to be observed and controlled, the result was a disconnect from nature. We became, in the words of Daniel Quinn in his book Ishmael, “Takers” and not “Leavers.”

Thousands of years of taking have caught up with us—and our soil. Approximately 40 percent of agricultural soils worldwide are degraded or seriously degraded; we lose an estimated 36 billion tons of topsoil every year. Scientists warn us that we only have about 60 years of productive soil left. What will happen when the Earth has lost all of its soil and can no longer produce food? While this is a dire future, it doesn’t have to be our destiny. It’s time to act. And the solution is under our feet. The authors of this article work on projects that promote soil and community health for Greenpeace and other organizations. This is the story of how each of us came to see soil as a solution to one of our biggest environmental problems—and as a tool to build more resilient communities.

As the co-owner of a farm and eco-lodge in Peñas Blancas, Costa Rica, I’ve long been interested in ways to optimize agriculture. Years ago, I met Tim LaSalle, then CEO of the Rodale Institute in Pennsylvania. From LaSalle, I first learned about the importance of carbon in soil health. Soil carbon comes from the interaction of photosynthesizing plants and the web of life in the soil. He said that if enough of the planet’s arable acreage were converted to what he described as “regenerative” agriculture, we could draw enough carbon dioxide from the atmosphere and mitigate climate change. I saw his data, and the conclusion was undeniable: If we just farmed in a way that optimized photosynthesis and learned to leave carbon in the ground, we could repair damaged water cycles, capture greenhouse gases, and address one of humanity’s biggest challenges. My world was rocked. I thought I was a pretty well-informed citizen scientist, and I was long in the camp of folks who advocated for non-GMO and organic agriculture, but I hadn’t made the key connection to carbon sequestration. Several years later, my world was rocked again. At our farm in Costa Rica, we’d been farming under organic or biodynamic certifications. We composted, used teams of oxen and water buffalos pulling old-fashioned plows, employed biodynamic preparations for soil fertility and overall plant health and gave our fields years of rest. So we were shocked when we measured our soil’s carbon content and learned the soils at our farm held less carbon than the rainforest around it.

Then I remembered Dr. LaSalle’s presentation and realized that organic practices don’t necessarily translate into greater soil health. While our oxen and water buffaloes were impressive and “old school,” it turns out they didn’t build soil. Ploughing fields—by any method—exposes decomposing microorganisms and sequestered carbon to oxygen and sunlight. This also meant that when it rained, all those good nutrients in the soil washed away. I realized we weren’t using permanent ground cover where we were growing our crops, so we weren’t optimizing the natural process of photosynthesis. We were planting crops in monoculture plots with plants of uniform heights. If we wanted to be more aligned with natural systems that optimize solar cycles and carbon capture, we would need to think about how forests, prairies, and rainforests produce food—and that’s not in monoculture rows surrounded by bare earth. 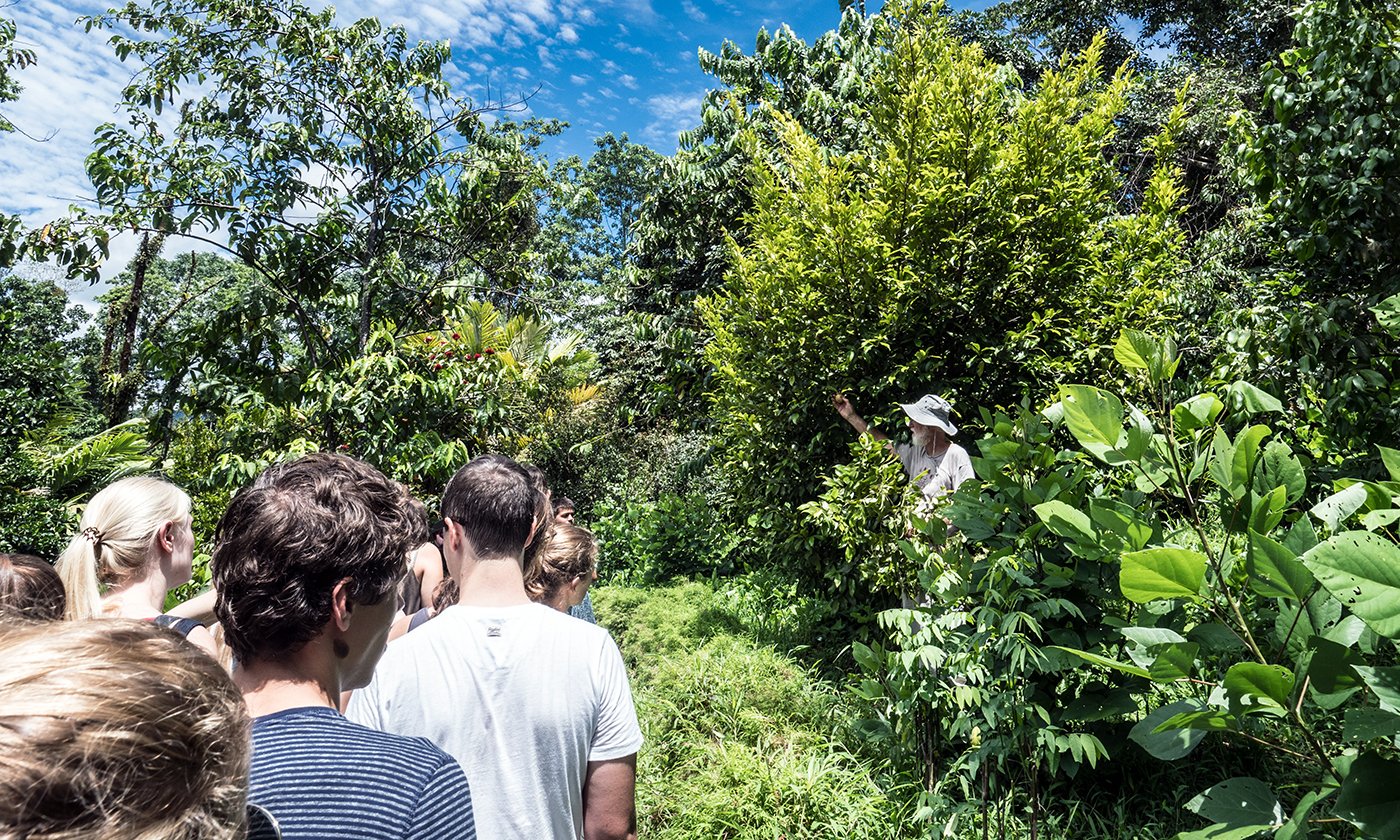 So we integrated principles of regenerative agriculture into our farm, and everything changed. We’re still using organic and biodynamic practices, but since employing regenerative practices, our farm is performing a lot better, or so our fields seem to be telling us. Our fields and pastures are home to a greater diversity of ground cover and grasses, native creatures are coming onto our lands, and our fruit and nut trees are producing with ever greater abundance. A key part of our journey was admitting that we didn’t know everything, and to humbly learn from how natural systems grow food.

Ironically, my journey to realizing the importance of soil began in a city. As a student at Barnard College in Manhattan, I was disturbed to see mounds of garbage lining the sidewalks as I walked to class in the morning. Having been raised in the lush Pacific Northwest, where we take our recycling seriously, I was more accustomed to being surrounded by nature than piles of trash bags. What was in these bags and where was it going? I had to find out. My curiosity about those piles of trash in New York City led me to spend more than a decade of my life following waste around the globe, learning how our culture of material excess and planned obsolescence is trashing the planet. My first stop was New York’s Staten Island, home of the infamous Fresh Kills landfill—at the time, one of the largest dumps in the world. I had never seen anything like it. As far as I could see in every direction, there was rotting food, old furniture, discarded appliances, books, and clothes. I was stunned by the scale of the waste—and by how effectively this side of our consumer culture was hidden from view. 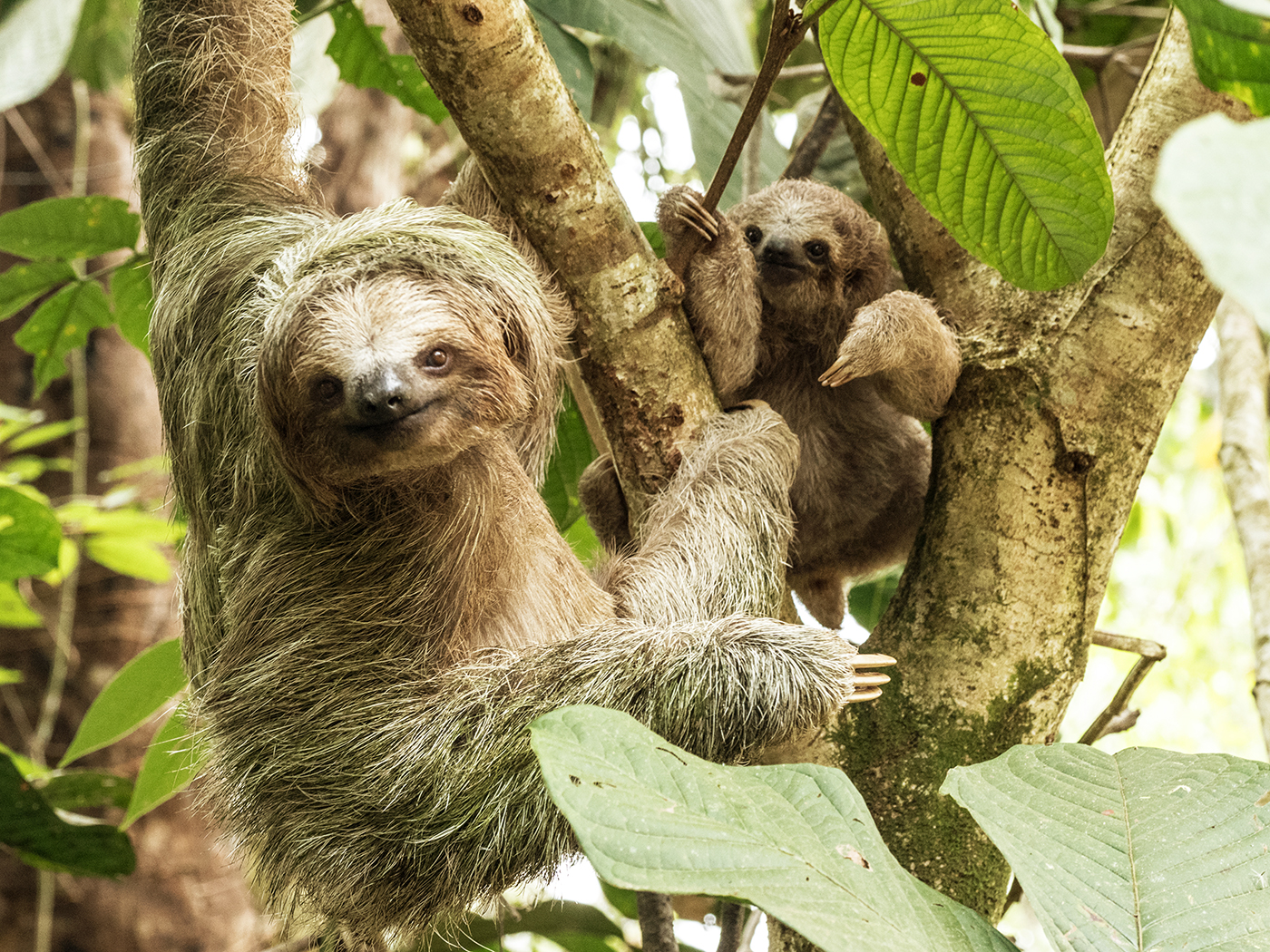 Sloths in the forest at Finca Luna Nueva. Photo by Tom Newmark.

After finishing college, I moved to Washington, D.C., to start working at Greenpeace. I was thrilled to land a job at an organization tackling the problem of waste. My work with Greenpeace took me around the world to investigate and advocate for solutions to waste. Everywhere I visited, from Staten Island to the Philippines, Guatemala, and Bangladesh, there was one thing common: A lot of municipal waste was organic. Food and yard scraps are full of nutrients, but what we do with them makes a big difference in how they interact with the earth once they’re discarded. Throw them in a landfill as we do in the U.S., and they convert to methane, a potent greenhouse gas. Leave them rotting in the streets, as happens in countries with irregular waste disposal, and they attract vermin and threaten public health.

By throwing away our food, we’re missing out on a win-win solution to our trash problem. When food scraps are used to fertilize crops as compost, they build soil health while reducing a major source of waste. What’s more, it can work on all scales, from backyard herb gardens to whole farms. And with such a significant portion of municipal waste being organic, composting makes a huge dent in the challenge of dealing with waste. But what I love the most is this: composting can build community social and economic resilience. For example, in Manila’s barangays, or small neighborhoods, in the absence of regular waste collection, the Mother Earth Foundation organizes residents to compost organic material. There, neighborhood youth receive a small stipend for going door-to-door to collect the material, which is composted in street side bins and used in potted gardens. And building this community compost system requires neighbors to come together. In areas where garden pots are hard to come by, neighbors lined the path with old tires, filled with compost, and now bursting with flowers and herbs. The barangays that participate in these programs are colorful and lush compared to those that have piles of garbage rather than flower beds on the corners. 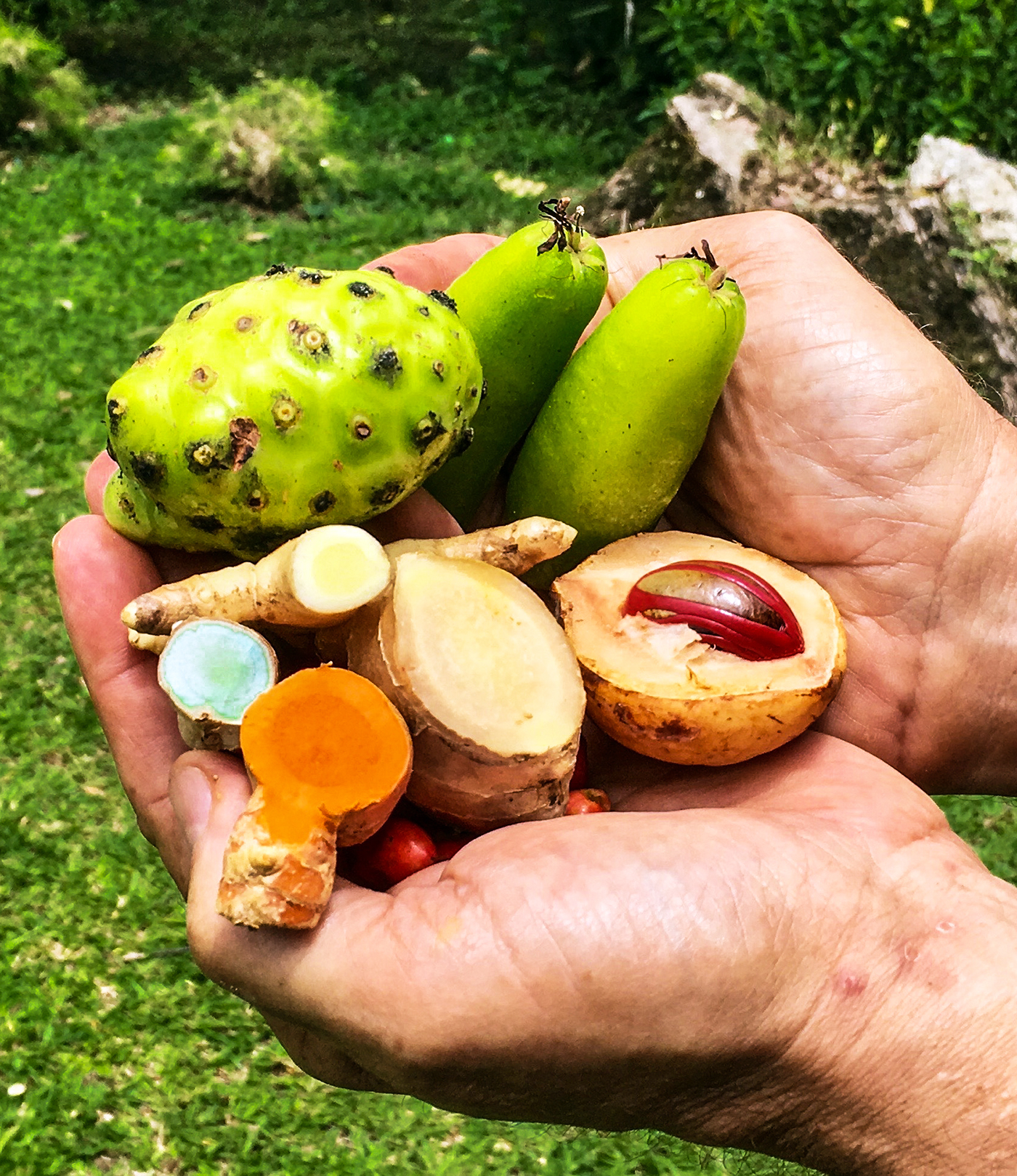 Spices and fruits from the farming fields at Finca Luna Nueva. Photo by Terry Newmark.

Composting isn’t limited to low-tech neighborhood approaches, although I admit those are my favorite. Where I live in the San Francisco Bay Area, we have curbside collection of organic material. Every resident gets a little green bucket to keep our food scraps in. San Francisco’s residents and businesses compost 650 tons of food scraps and other compostable material per day. Regardless of the logistics involved, composting takes organic waste from individuals, mixes it together, and transforms it into a practice that benefits a community—and the planet—as a whole. Figuring out local composting systems requires us to come together to solve problems that affect us all, and we’re going to need a strong sense of community to guide us through our soil and climate crises. We cannot continue to treat our land, air, and water like ATM machines hooked up to bottomless bank accounts; at some point they’re bound to run dry. Life comes from the soil and ultimately returns to it. The story of soil is the story of all of us and it spans eons. It tells us to adapt to nature, not to squeeze every last drop of value from it. It reminds us that our fate is inextricably bound to the soil’s, and that ultimately, we’re all in this together.

This article is syndicated from YES! magazine. YES! Magazine reframes the biggest problems of our time in terms of their solutions. Online and in print, we outline a path forward with in-depth analysis, tools for citizen engagement, and stories about real people working for a better world.  Annie Leonard is the executive director of Greenpeace USA and founder of The Story of Stuff Project. She is a YES! contributing editor.

The clearest way into the universe is through a forest wilderness.
-John Muir-

We've sent daily emails for over 16 years, without any ads. Join a community of 163,983 by entering your email below.