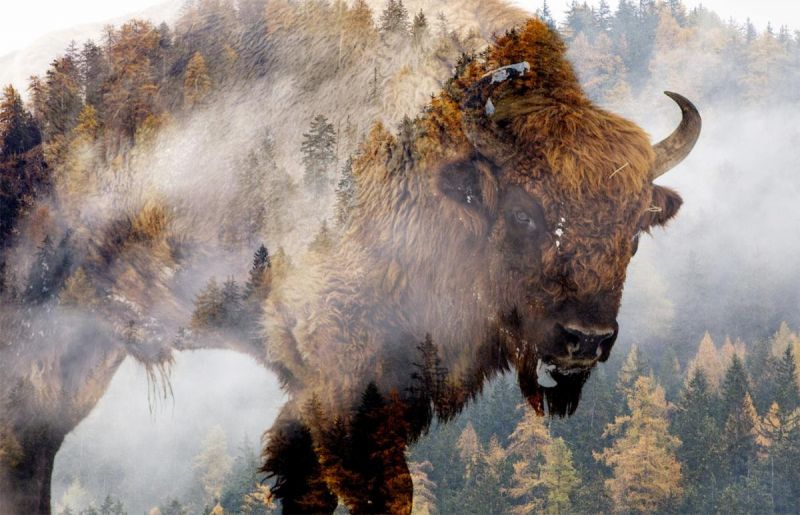 Like many others who know the world as beloved, I am often intoxicated by wild places, driven as mad as Rumi but with Earth (not Shams) as my love. Certain places — like where springwater falls over a slickrock ledge, sculpting the land of canyons, or where steam bubbles from dark cauldrons in Yellowstone while bison hunker nearby — have a power to radically alter my state of consciousness, such that suddenly my bodymind re-members the most expansive thoughts, ecstatic feelings, deepest mysteries, or the biggest cosmic questions of my life. It’s almost as if I get something like a “contact high” from the land.[1] For me, the relationship between particular places and dimensions of consciousness is undeniable. It is almost as if the land finds some resonance or expression through me, as if sometimes I might be more permeable or “available / to any shape that may be / summoning itself / through me / from a self not mine but ours.”[2] When I first read these words from poet A.R. Ammons, I trembled in recognition.

In addition to feeling as if an invisible chord in my being vibrates in resonance with particular wild places, I’ve noticed that a contact high or full-bodied exhilaration is sometimes stimulated by poetry or other texts — particularly descriptions of mystical or visionary experiences or other encounters with mystery — as if the scent and texture of the experience somehow wafts from the page into my organ of perception called imagination. If I’ve been fortunate to already have had a similar encounter as the text I’m reading, my ordinary mode of consciousness might abdicate, and suddenly I could be enveloped by a palpable sense of profound meaning and mystery, a palpable sense of a thinning veil between the ordinary “me” and an enfolding and very lively psychic field populated by wilder or mysterious Others. It is a strange and wonderful revelation to burst into a mystical view while reading the visionary evocations of other people.

In another version of unexpected enlivenment that I can’t explain but only honor, I’ve noticed that films, images, or written texts that illustrate the intelligence and beauty of fungi or mycelium will blow open my dusty windows of perception almost without ffail.

In our time of change and uncertainty, reliable gateways to expand – or to loosen the tethers of — ordinary consciousness can serve not only the journey of soul but also the wider Earth community. We enrich the collective imagination when we have, nearby, a portal to the visionary state or to wild mystery — near enough to slip through frequently. Doing so can help us prioritize where to offer our psychic energy, imagination, and attention. As Rick Doblin, founder of the Multidisciplinary Association for Psychedelic Studies (MAPS) has said, “Mysticism is the antidote to fundamentalism.” Most of us can probably sense and feel the deadening effect that fundamentalist views have had on our world, not to mention the deadening effect on our own psychic habits.

The more frequently individual human beings touch a felt-sense of the possible world that Arundhati Roy knows is so near, or that Charles Eisenstein has called The More Beautiful World Our Hearts Know is Possible, the more we seed and participate with the collective psychic field, or what has been called the noosphere[3], or the “mind-sphere” of Earth.

Though we might too easily forget, anyone who has experienced an encounter with mystery — whether it be through a deep imagery journey, a vision fast, contemplative prayer, entheogens, a dream, wilderness wanderings, or other portals — already has a felt-sense of what William James wrote so clearly: “Our normal waking consciousness… is but one special type of consciousness, whilst all about it, parted from it by the filmiest of screens, there lie potential forms of consciousness entirely different… No account of the universe in its totality can be final which leaves these other forms of consciousness quite disregarded.”[4]

These “potential forms of consciousness” include mystical and visionary dimensions that may hold essential (and non-rational) guidance for navigating our time of collective dismemberment and for bringing forth a possible world of soul-infused vitality, vibrant diversity, true community, and deeply-rooted coherence with Earth’s life support systems and the rest of our more-than-human planetary family.

At least, those are some elements of a possible world I envision when I’ve climbed through my dusty windows of perception and made myself more “available / to any shape that may be / summoning itself / through me / from a self not mine but ours.”

Maybe your windows (or doors) of perception are never dusty or closed, but if they are, how do you open them? What do you see or feel, remember or imagine? What shape or wild expression — of mystery or of a possible world — is summoned, even now, through you?

[1] For those who don’t already know, “contact high” is when one person who has not ingested any cannabis or other altering substance encounters another person who is in some “altered state” — and the non-imbiber is joggled out of ordinary consciousness by the encounter with the other.


Syndicated from Soulcraft Musings. Soulcraft Musings are drawn from published and unpublished works by Bill Plotkin and other Animas guides and offer weekly trail markers (cairns) on the journey to soul. Each Musing builds on previous ones but also stands alone, and you can join at any time. You can read previous Musings here.

Geneen Marie Haugen’s writing has appeared in many collections and journals, including Spiritual Ecology: The Cry of the Earth, Thomas Berry: Dreamer of the Earth, Written River, Parabola Journal, Kosmos, Ecopsychology, and High Country News. She guides with Animas Valley Institute.