Home > News > What You Get Into Will Change You

What You Get Into Will Change You

Sometimes in life you just don’t know what you’re getting into.

You’re reminded of this, the day you kayak through an otherworldly stretch of sea caves in the Apostle Islands National Lakeshore.

The Lakeshore is a preserve of almost 70,000 acres at the northernmost tip of Wisconsin. It includes a 12-mile ribbon of cave-studded shoreline along Lake Superior, or Gichigami, “the great sea,” as the Ojibwe people know it. The preserve also encompasses all but one of the 22 Apostle Islands, an archipelago that, in Ojibwe tradition, is the center of the world.

On this day, as you dip and pull your blades along the red sandstone cliffs, Gichigami is strangely calm, like glass. No chop at all. Not even gentle swells. Yet your guide urges you to stay close to him. It’s the height of summer, but the emerald water is cold enough to kill. If you capsize, he’ll need to rescue you within minutes.

Over the next two miles, the guide leads you through a series of caves. Waves, wind, and ice have been sculpting them from the rock face for the past 12,000 years. 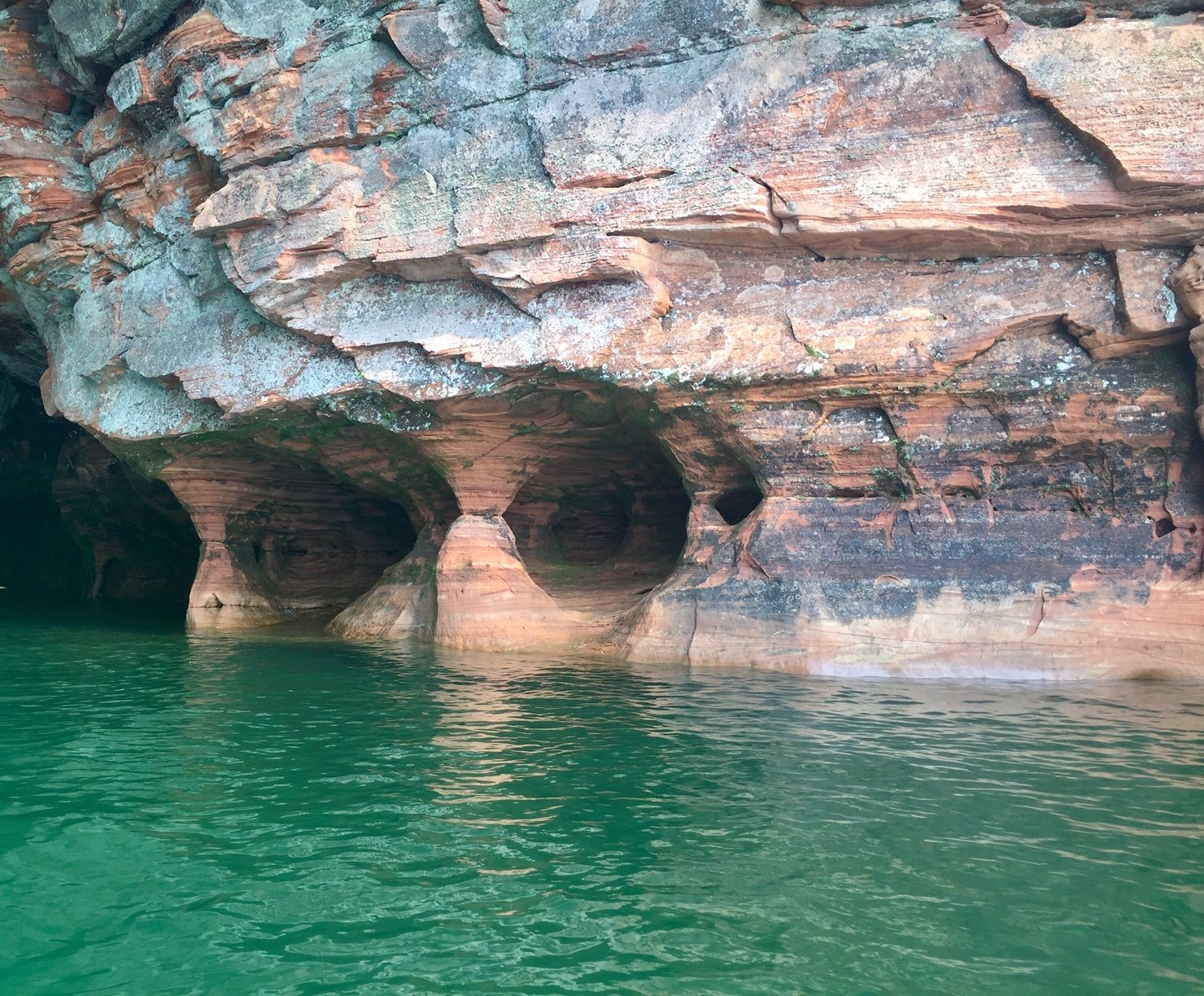 To your mind, the word “caves” doesn’t match the breathtaking formations through which you pass. They’re not underground. They’re not cold tunnels. They’re not pitch black. They don’t make you feel trapped.

The first cave, dubbed “The Mousehole,” is a tiny arch. To slip through, you stow your paddle atop your kayak, tuck in your arms and head, and hunch forward in the cockpit, flattening your upper body toward the bow. Were Gichigami awake and heaving, you wouldn’t try to maneuver through this needle’s eye for fear of getting hurt. Even on a quiet day like this, with the lake fast asleep, you struggle. You scrape your elbow as you squeeze through.

A few caves later, you approach “The Garage.” You stroke through another small archway into a room with a very low ceiling. Then, suddenly, you emerge into an enormous domed chamber, richly illuminated through a broad doorway. Beyond the door, the translucent water rushes away to the horizon.

This grotto is the largest sea cave in the entire Lakeshore. Entering it feels like being reborn into the world. As you stare up at the ancient rock, its colors and patterns shifting in the sunlight, you’re transported into awe. Everywhere in the stone walls you see dark hollows, shaped like skulls. They suck up water and spit it out in gloops and glugs.

Yet the most dramatic cave you navigate today may be “The 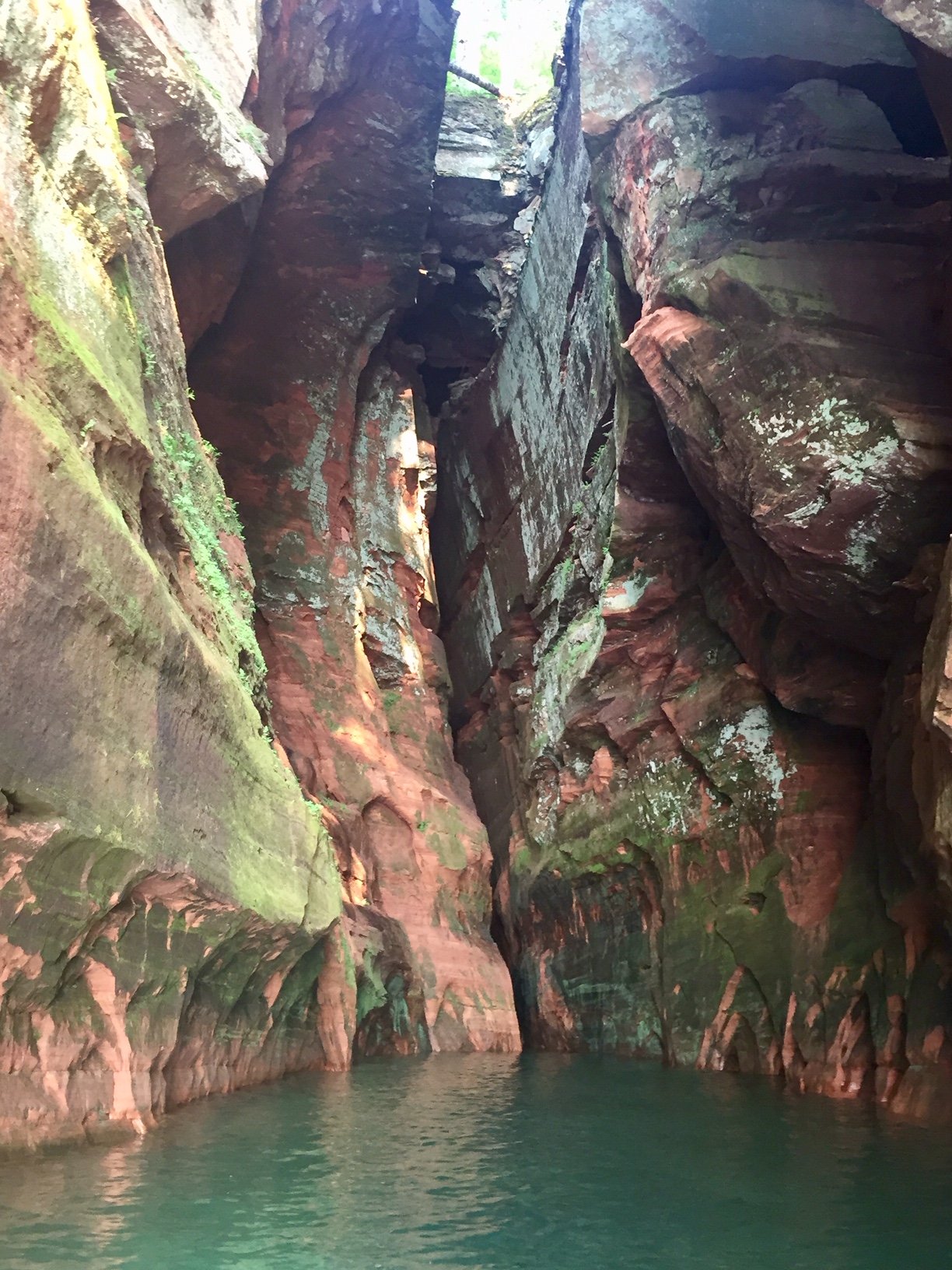 Crack.” It’s a long, narrow cleft in the cliff, just wide enough to admit your kayak. After nosing into it, you stash your paddle. You reach out your hands. You press your palms against the sheer, rough sides of the cave, propelling the craft ahead.

You ease ever deeper into the cramped body of the land, floating in shadows. Water laps against rock and drips from the walls. Craning your neck, you glimpse a sliver of blue sky overhead, at least 50 feet up. Down from that slit filters your only light.

You creep forward until a boulder obstructs your way … or no, not a boulder, after all, but a huge log that looks petrified, wedged between the walls. How long has it been there? you wonder.

You sit in The Crack, bobbing on the water, contemplating the forces of nature and vast expanse of time that have created this place, and brought you into it. Even now, this fissure in the Earth is changing, massaged by the elements.

Eons smack up against the moment. How is it you’re here, a mere speck?

Time to leave now. You push yourself back out of the cave the same way you came in. But you aren’t the same person who entered.


This post first appeared in a recent issue of Staying Power, Phyllis Cole-Dai's weekly care package for creative, compassionate spirits. Syndicated with permission from phylliscoledai.com. Phyllis Cole-Dai began pecking away on an old manual typewriter in childhood and never stopped. She has authored or edited 10 books in multiple genres, seeking to write across what divides us. Recent titles include Poetry of Presence: An Anthology of Mindfulness Poems (with Ruby Wilson) and Beneath the Same Stars: A Novel of the 1862 U.S.-Dakota War. Originally from Ohio, she now resides with her scientist-husband, teenage son, and two cats in a 130-year-old house in Brookings, South Dakota. Get your free sampler of her work at phylliscoledai.com.

Our lives disconnect and reconnect, we move on, and later we may again touch one another.
Salman Rushdie