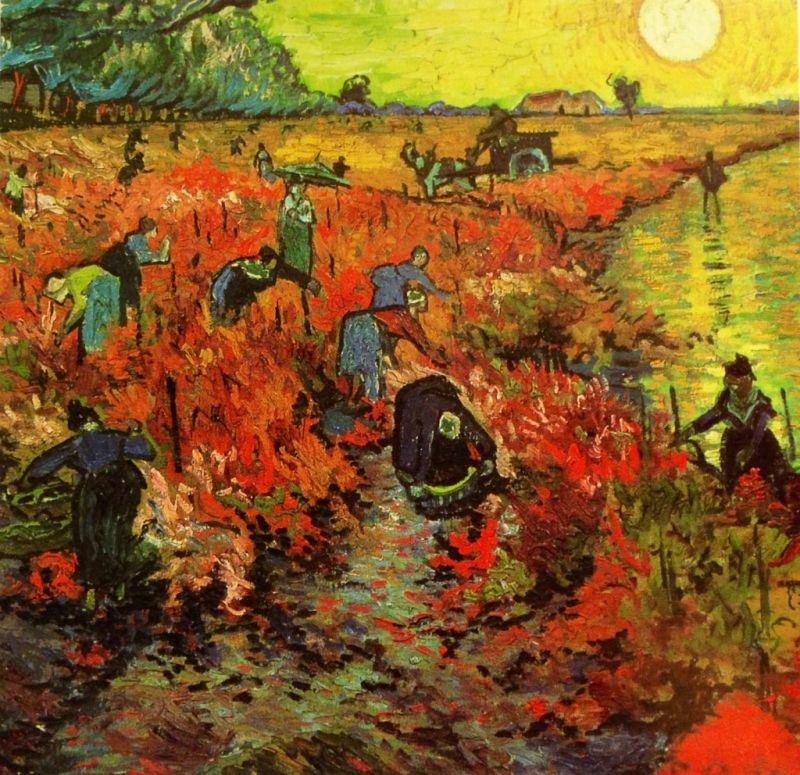 One morning last October, I experienced a moment of grace. It happened as I was walking my black Labrador retriever, Shadow, on one of those warm autumn days when everything looks edged in gold. But I was shuffling along like a waif in a storm because I had just learned that a project I had counted on had fallen through.

Shadow staged a sit-down strike when we came to a little lake. Head high, back straight, she refused to budge until she had a chance to explore the shore. So I stood and waited. A pair of white swans and a dozen Canadian geese were gliding over quiet water that mirrored trees ablaze with yellow and scarlet leaves. It struck me that there was a living presence, a shining awareness behind this world.

My heart reached out. It was like a fist unclenching. It let go of all the ideas I had been carrying about what success and fulfillment are supposed to look like, scattering them on the water like bread crumbs for the geese.

“Thy will, not mine, be done,” I said, and I meant it. There was a lightening inside. It was as if I had walked out of a small, dark room into the beautiful flow of life around me.

Later that day a friend phoned and urged me to call Chuck Hornsby at Lyon Travel in Brattleboro, Vermont. Hornsby was organizing a group of wine journalists to fly to the south of France for a week to attend a program at the Université du Vin—the University of Wine. The journalists were to visit famous vineyards and winemakers in Provence and taste the spicy, complex Côtes du Rhône wines that many experts believe to be among the greatest in the world.

“But I’ve never written about wine,” I told my friend. “I write about books and the search for truth.”

Still under the spell of what had happened by the lake, I called Chuck Hornsby. To my amazement, he asked me if I could be ready to go in ten days. At dinner I told my husband and daughter that I had to fly to Provence. 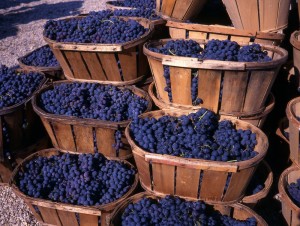 “And I’m sure you will someday,” murmured my husband.

I tried to explain.

“I don’t think God is sending you Air France tickets to teach you a lesson about the goodness of life,” countered my husband. “Strangely enough, that’s exactly what I think is happening,” I answered.

My ten-year-old daughter reminded me to bring her back a present.

I met Chuck Hornsby, a lean, crisp New Englander with a white mustache, at the train station in the walled medieval city of Avignon, the papal seat and center of Christendom in the 14th century. Hornsby loaded me and several of the wine journalists into a van and drove north to Rochegude, a tiny village lined with ancient buildings of yellow Provençal stone. Hornsby informed me that Thomas Jefferson favored the wines of this region. Jefferson’s worldliness amazed me; I couldn’t imagine how any wine from this remote place would have reached him.

We crested a hilltop and drove through vast wooden gates into the cobblestone courtyard of the Château de Rochegude, now a four-star Relais & Châteaux hotel. Night had fallen. I hoped out of the van and looked up at the ruins of the 12th-century tower, remembering that there is nothing like a long trip to an exotic place to make us long for what is cozy and familiar. All I wanted was a hot bath and warm bed.

But I forced myself to meet the group for dinner. On the way to the dining room I passed through the Salon Cheminée, a chamber dominated by a vast fireplace and hung with ancient scrolls emblazoned with papal seals. Here, where waiters now stand at attention, was once the ecclesiastical court for the popes of Avignon. I wondered how the popes would have judged me.

As waiters glided around the table pouring wine, we introduced ourselves and described what we hoped to see and write about. Trying for a tone of sophisticated nonchalance, I announced to this group of professional oenophiles that I knew next to nothing about wine but that I was hoping for a spiritual epiphany.

“I guess your assignment is harder than ours,” ventured someone after a long pause.

During our conversation, we were served a “light meal” that started with foie gras and proceeded through an array of delicious and mysterious dishes that culminated in the mildly humiliating trial of the cheese course. A stern-faced young woman wheeled a cart filled with dozens of cheese right up to me in spite of all my mental efforts to will her to move on to someone else.

After the briefest bout of paralysis. I pointed at a chévre. She stared at me with what seemed to be a mix of incredulity and barely concealed disgust at my lame choice. Finally, she cut me a slice and waited for me to choose again, and again. I tried to point with stony assurance. 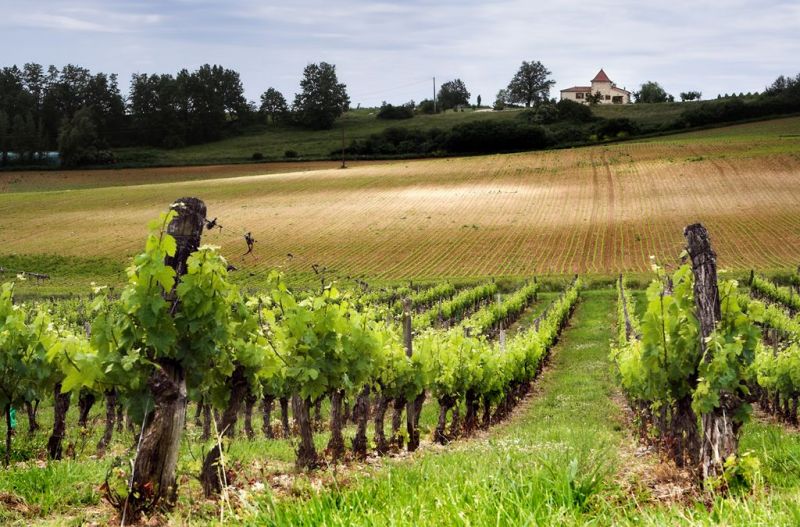 French vineyard along the Garonne river

The next morning, as I layered on sweaters and scarves against the cold, I armed myself with one of my favorite quote: “Adventure is just discomfort in retrospect.” This was the one thing I knew for sure. The sky was gray and the wind was howling when we arrived at the massive Château de Suze la Rousse, home of the Université du Vin. After a brief tour, we were ushered into a tasting amphitheater, which had tiers of desks outfitted with little sinks. Here we examined various Rhône wines for brilliance, richness, and intensity of color.

I held my glass by the stem and squinted at it, copying the people around me. I practiced swirling the glass to release the bouquet, or nose, of the wine.

“What are you getting?” asked our teacher.

I learned that wines carry the scent of many things, from leather and game to mushroom, herbs, and the oak of the casks. The other journalists sloshed the wine over their palates to assess its weight, richness, depth, and balance. They spoke gravely of finish, or how long the taste of a sip lingered in the mouth. I was struck dumb by how much I couldn’t taste.

During break, Jonathon Alsop, a wine journalist from Boston, assured me that although there is a science to making and tasting wine, it is an inescapably personal art as well. “Wine is of the earth,” he said. “It has the vital force so it can stir our memory of things in life that we love.” Over the course of the afternoon, I began to understand that the fermentation process is really a subtle alchemy that inflects simple grape juice with flavors that can move us the way the tang in the air on an autumn night might remind us of our first love. Tasting wine is a way to taste life.

At the end of the day, we descended into a vast wine cellar. We stood in near darkness on an earthen floor, surrounded by racks of rare wine, many of them hundreds of years old. “Remember that some of these wines are still alive and evolving,” whispered one journalist, as if he might wake them. “And some are already dead.”

“But how can you tell which wines will live and which will die?” I asked.

“Nobody knows,” said someone else. A seemingly powerful, well-structured wine can fade while another opens up with each passing year, softening, deepening, and growing more interesting. It is a mystery. Just as it is with people. 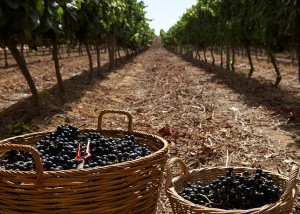 Several days later, in the vineyards of Château le Nerthe in the famous wine village of Châteauneuf-du-Pape, I learned what I had come to France to learn. In the modern winery, I watched workers zipping around on forklift trucks, stepped over enormous hoses, spewing wine, stared up at gleaming stainless steel silos. I passed through cold, cavernous halls of oak barrels where the wine is “racked” for aging and listened to people endlessly discuss technical details of wine making in French and English. Someone invited me to stick my head into the porthole of a 50-hectoliter storage tank to smell “the sheer grapiness of it.” I did. “Look at Tracy,” said Alsop with a smile. “She’s passed straight from hopes of an epiphany to disgust.”

I laughed but at the same time was overwhelmed with the sense that I had traveled here under false pretenses. I had been floating along, vaguely hoping that at some point ordinary experience would be pierced by a greater awareness, like that moment of grace I had experienced at the lake. I had been so sure that I was being led. Now I felt like a child tagging along with adults.

I wandered out to the terrace of the château and took in a landscape that might have inspired van Gogh. Not yet touched by frost, the vineyards were gold and seemed lit from underneath. The late afternoon sky was azure, and the clouds were lavender and molten pink. In the distance were stands of tall cypress trees and columns of workers harvesting olives. Lavender, thyme, rosemary, sage, and oregano, the herbes de Provence, scented the air. I had a thought as soft and fleeting as the perfume in the breeze: I had been dreaming and now I was awake. The process of awakening like winemaking, an alchemy that changes you, bringing the flavor of life inside.

Jay Fedigan, a friendly photographer from Boston, waved for me to come down into the vineyard. I was amazed that the gnarly vines were not rooted in the soil at all, but stood like rough fence posts in a field of big quartz stones in sandy red clay. At the Université du Vin, people had spoken reverently of old vines that grew in poor soil on steep slopes with no irrigation. I learned that conditions are deliberately made difficult in vineyards like this one. The yields of such vines is very low compared to the lush growth of more fertile fields, yet the grapes that survive have a very full, clear, concentrated flavor. It is the wines from these grapes that have the potential for greatness.

Fedigan urged me to pick up some stones and smell. He explained that the grapes carry the surrounding terrior—the soil and everything that touches them as they grow. I breathed in the spice, peppery warmth of the south. I felt the thrill of returning to my senses, of emerging from the small world of my hopes and fears into the larger world of air, rusting vines, and rocky soil beneath my feet. I was glad to be on an earth that knows how suffering can be transformed into strength and beauty, how hard times can be the ground for the deepest and purest joy.♦

This article originally appeared in Parabola magazine and is reprinted here with permission. Parabola is a not-for-profit organization that. Four times a year for over thirty-five years it has gathered the wisdom of the world's spiritual traditions to illuminate the central questions of life. Tracy Cochran is editorial director of Parabola. For more information, please visit tracycochran.org.

Art is a harmony parallel with nature.
Paul Cezanne

We've sent daily emails for over 16 years, without any ads. Join a community of 242,697 by entering your email below.