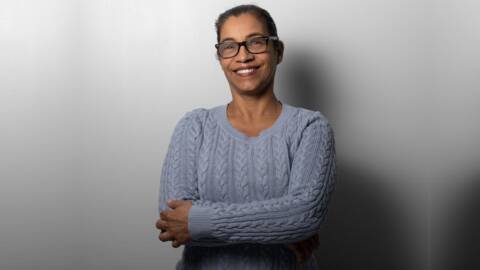 Lottie Cunningham is a Miskitu leader from the Northeast coast of Nicargua. (Angie Vasquez)

Against all odds, human rights defender Lottie Cunningham has been at the helm of the battle for indigenous rights in Nicaragua for the past 20 years. She was among four activists on Thursday to receive the Right livelihood award, the alternative Nobel for peace, for her decades-long work.

Lottie Cunningham’s voice is calm, her sentences paced by long pauses. In a style that reflects the lawyer that she is, the 61-year-old rights activist weighs every word she speaks:

“As indigenous peoples, we have protected mother nature from generation to generation, like our grandparents taught us. And this has not only been for our own well-being, but also for everyone else’s. It is crucial that we preserve the balance of the Earth.”

More than 400,000 indigenous peoples and Afro-descendants live along Nicaragua’s Atlantic coast. For years, their livelihoods have been threatened by massive exploitation of their lands through mining, logging and intensive farming.

For Cunningham, indigenous rights and environmental rights cannot be separated. Born in Bilwaskarma, a Miskitu village next to the northeastern border with Honduras, she has always “aspired to help her community”. She was a nurse in the 80s when the civil war started, and she was displaced along with thousands of indigenous peoples into “military settlements” that they could not leave.

“This really marked my memory,” she says. “I saw and lived through my community’s suffering. But as a nurse, my opinion did not count.” As a single mother, she went on to pursue a degree in law in Managua. “As a lawyer, I could raise my voice in support of my people.”

A landmark achievement. Relentless, intrepid, and full of optimism, the Miskito lawyer and founder of the Center for Justice and Human Rights of the Atlantic Coast of Nicaragua (CEJUDHCAN) uses legal action to defend indigenous people’s rights to land and resources.

She participated in the first landmark case on collective indigenous rights presented before the Inter-American Court of Human Rights (ICHR) in the late 1990s. With the help of the Indian Law Resource Center, they sued the government for handing over the rights to a Korean company to harvest the wood on Mayagna indigenous territory for a period of 30 years, in violation of the constitution.

“Although the constitution recognises communal land rights, the demarcation of indigenous territory had not been established,” Cunningham explains.

“Presenting this case was a chance to show to the government that those lands do not belong to the State as it claimed but belong to indigenous peoples, as it has been since way before our nation of Reserva Moskitia was incorporated to Nicaragua,” she adds.

It was also an opportunity to educate the judges of a very conservative court on collective rights versus private property:

“For the first time, the court ruled in favour of indigenous peoples, recognising that their relationship to their land is not only material but also spiritual and that it is linked to the right to live.” 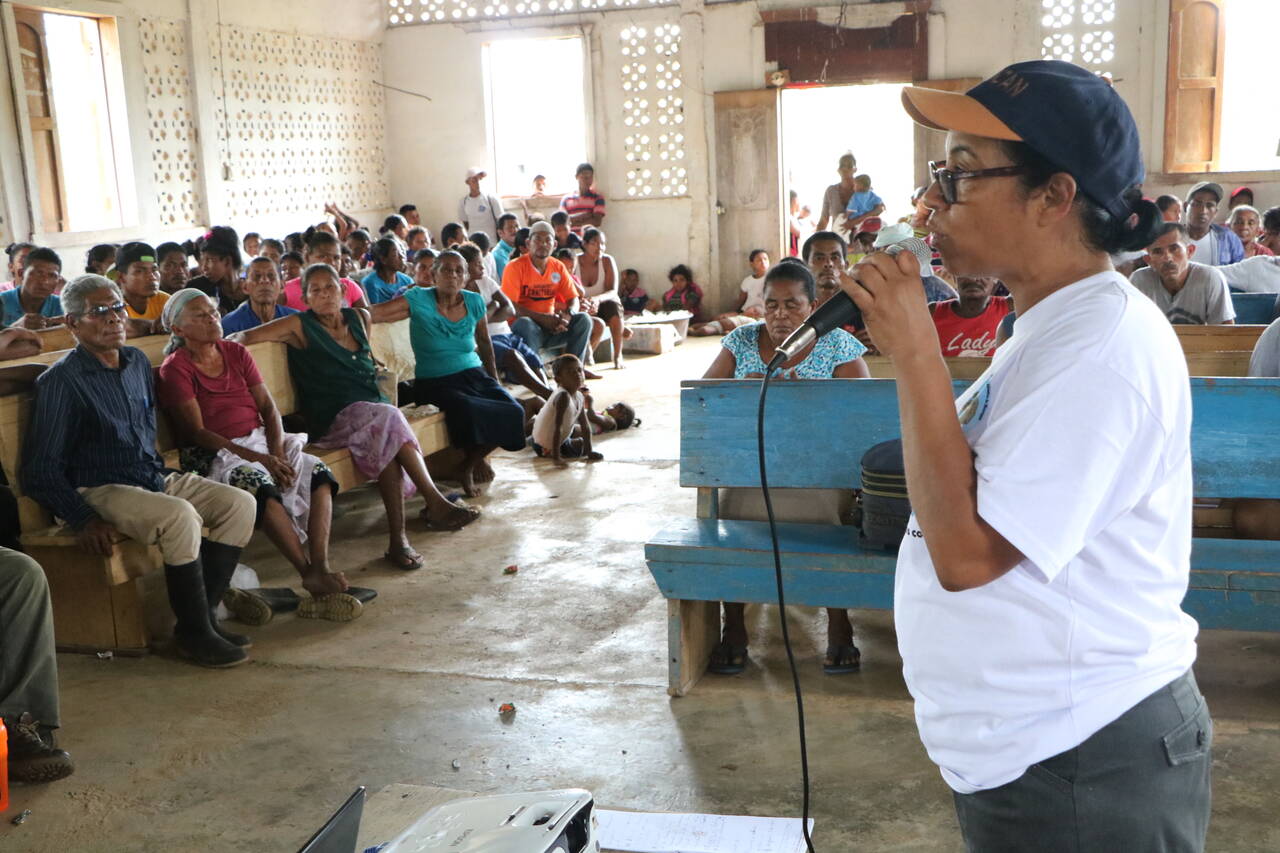 Lottie Cunningham speaking in front of an indigenous community in Nicaragua. (CEJUDHCAN)

This also set a precedent for other indigenous communities from Latin America to use before the regional court. No more than a few years ago, a similar legal strategy contributed to stopping the construction of the Grand Canal, a 278 km project that aimed to rival the Panama Canal. The Chinese-backed project, which is currently on hold, would have cut through Nicaragua and connected the Pacific and the Atlantic oceans, displacing indigenous communities and causing major damages to ecosystems essential to their survival, including the Lake of Nicaragua (the largest one in central America).

Cunningham supported the litigation and worked on informing other indigenous communities about the disastrous impact the project would have for the country’s resources.

A never-ending battle. Despite these undeniable achievements, the fight is far from being over. Almost 20 years later, though some advances have been made, the process of demarcation and titling is still facing obstacles, Cunningham warns. Instead, national and local authorities have aggressively promoted massive land exploitation as the country reels from an economic downfall rooted in a two-year-long socio-political crisis.

This has encouraged armed settlers to invade indigenous territories to ranch cattle and harvest wood, sparking violent conflicts. Since 2015, some 40 indigenous people have been assassinated, while others have been injured, kidnapped or have disappeared, according to CEJUDHCAN’s data. Two massacres, in which at least ten indigenous people were killed and a community was burned to the ground, took place in 2020.

Deforestation has also contributed to further devastating effects of environmental disasters. Last month the northern Caribbean region was battered by hurricanes Eta and Iota, devastating around 200 communities and causing 30’000 people to be evacuated.

Overcoming fear. Taking the government to court and speaking out against powerful companies has put a target on Cunningham’s back. Like many other human rights defenders in Nicaragua, she has received death threats, prompting the Inter-American Commission of Human Rights to issue cautionary measures on her behalf. She has had to adopt safety measures such as changing her schedule and her route to work. “This is just part of how we have to work to survive,” she says.

Environment and land defenders are among the most threatened in the world. On average, four defenders were killed every week since 2015, with more than two thirds of killings last year taking place in Latin America, according to a Global Witness report.

“It’s difficult because, of course, we feel fear,” Cunningham says. “But when you understand that you are there to seek justice for so many women and kids that have no opportunities, that gives you energy to overcome your fear.”

“If we don’t keep doing the work, then who will?”

This article syndicated from Geneva Solutions, is licensed under Creative Commons BY 4.0. More articles by Michelle Langrand here.

I am a kind of paranoiac in reverse. I suspect people of plotting to make me happy.
J. D. Salinger