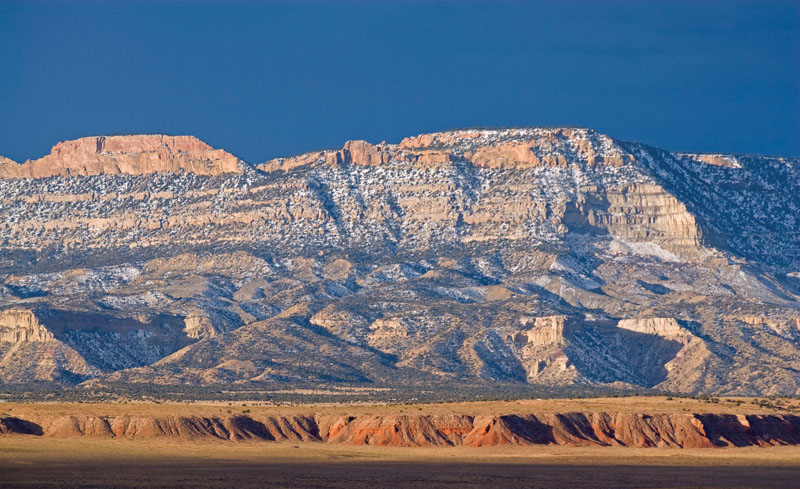 Black Mesa, Arizona, where the Hopi have lived for centuries.

There is something liberating about going on a journey. It frees the spirit and opens the door to encountering new and exciting experiences. If you’re lucky, the fates might steer a bit of serendipity your way. A “wrong turn” on the road leads you to discover an old castle; an architectural gem you find fascinating. Maybe a chance meeting with a poet in a café livens up your sightseeing day and you remember it with a smile, long after the trip is comes to an end.

These serendipities are gifts, a reward for getting off the couch and taking to the road! Sometimes the memory of your excursion is enhanced by the objects you bring home. Those seashells you picked up on the beach remind you of that brilliant blue sea. The jaunty pottery jug on your bookshelf recalls the small hill town in Portugal where you found it. You never tire of looking at it and it brings back the memory of that long-ago adventure.

On a vacation trip to a Hopi village in America’s southwest, my wife Elizabeth and I met a Native American artist. It was one of those chance meetings that stays with you long after the trip is over, illuminating your life in an unexpected way. Here’s how it happened.

Part of the attraction for my wife and I to visit the southwest was our mutual interest in Native American arts and culture. We’re both artists. Liz is a painter and I’m a sculptor and teach ceramics at a middle school in Brooklyn. When I go on vacation I try to gather material for my art-making, and some things that I can share with the kids back at school. My students still have a sense of wonder, and they enjoy seeing the art objects I bring back from my trips.

I’m not a hot weather person, so perhaps the summer wasn’t the best time to visit the southwest. We rented a small car whose pseudo air-conditioning just barely fought off the heat, but the drive was beautiful. The blue sky seemed never-ending, and I was taken by the surprising vastness of the landscape. Across the miles of burnished desert you could see the rusty, reddish-brown mountains in the distance, reminding me of one of Georgia O’Keefe’s landscape paintings. Coming from the concrete and steel canyons of New York City, the sights of the mountains and desert canyons were a welcome relief. We drove by red rock outcroppings that rose up high, like giant, monolithic sculptures, their peculiar organic shapes sculpted by the force of the wind. Near the red rocks there were gnarled trees with olive green leaves.

We drove for a few hundred miles, and arrived at the Hopi Mesa at nightfall. After enduring the heat of the day, it was lovely to be out in the desert at night. The air was cool and fragrant with sage. The nocturnal sky looked enormous; a velvety backdrop of inky blue indigo speckled with thousands of sparkling stars and a crescent moon. The glow of ancient starlight seemed to amplify the immense silence of the desert night.

We stopped in the reservation restaurant, and ate a delicious dinner of stew and blue corn tortillas, a local specialty. Then it was to bed for a good night’s sleep in which I had a simple dream: I was sitting in a chair and a painting appeared on the wall in front of me. The painting had very pronounced Native American designs and colors. I especially took note of its bright blue sky. With that, the dream ended. But when I woke, dressed and mulled over my dream, the painting on the wall stayed with me, and I mused over what it might mean.

We headed back to the Hopi restaurant for a nice breakfast, and I was struck by something I’d never experienced in New York. The quiet of the desert seemed to have carried over to people. There was a good-size crowd of visitors in the restaurant that morning, yet the volume of sound was low, like a murmur. In New York, a crowd that size would be making a lot of noise, even to the point of being annoying. I had recently eaten in a diner, where a woman sitting near me was shouting so loudly into her cell phone, it was like she was announcing a football game! But here in the Hopi restaurant, the sound emanating from the crowd had an almost reverent air about it.

After breakfast we stopped at the museum and viewed its collection of cultural artifacts and some more contemporary paintings and pottery by Hopi artists. It was a fine display. The museum had a nice gift shop too. Like a bird drawn to its favorite bush, Liz soon found the jewelry counter. I went outside and tried to keep myself busy by walking around outside the museum. From the top of the mesa, the landscape opened up like a vision. Giant white cumulus clouds cascaded across the pale blue sky, floating high above the flat plain of the desert.

After a while, I ventured back into the gift shop to try to speed things up a bit. Liz was gazing at the handmade jewelry created by Hopi artisans, who are known for their silverwork. She asked the woman behind the counter if she could try on a silver bracelet. I looked up at the colorful painting on the wall behind the counter. It had Indian designs combined with landscape elements – a bright blue sky that took me by surprise: it was the painting I’d seen in my dream!

“That’s really a nice painting,” I said to the woman behind the counter. She smiled and said, “Oh, that’s by Michael Kabotie.” Then looking at my wife she added, “By the way, he also made that bracelet. Since you like the bracelet and you like the painting, you probably should go visit Michael.”

“Yeah, he lives right down the road.”

I took another look at the painting, “How strange,” I thought, “That’s definitely the painting from my dream.” Liz and I stepped outside the shop and, after a short conversation, realized that it would be foolish to ignore such an unusual synchronicity. We scrapped our plan to get on the road early, and opted to visit the artist instead.

We were welcomed with warm smiles by Michael Kabotie and his wife. Michael wore his hair long, in a pony tail, and had on a necklace of wooden beads. He wore a work shirt and blue jeans and it seemed like visitors to his place were a usual occurrence. Once he found out my wife and I were artists we launched into an animated conversation about Hopi art and culture. His art work was influenced by Hopi spirituality. He told us that the Kachina spirits are the intermediaries between our world and the spirit realm, and they are represented by doll-like statues.

As a sculptor, I was interested in the Kachina dolls, which are in essence, small sculptures. They are made for children, so they can learn the attributes of the different Kachina spirits. In her book, Kachina Dolls; The Art of the Hopi Carvers, Helga Teiwes writes about these mysterious beings, the Kachinas: “They are beings to whom all Hopi look for direction, heed and give prayers for the continuation of life… To the Hopi, all things are imbued with life. People, animals and plants have spirits, but so do rocks, clouds, water and earth.” The Kachinas, who have names like Snow Maiden, Eagle, Morning Sun, and Chasing Star, represent all the facets of our universe. They are an integral part of Hopi culture.

I started asking Michael one too many questions about Native American practices, and he held up his hand with a smile as if to say, “Whoa.” He added teasingly, “Listen, I’ve just spent five days in the kiva doing an intense ceremony, so I’m really Hopied out. Can we talk about art instead?”

I quelled my curiosity and let the man speak. He was a cool guy. Living out in the middle of the desert, he was immersed in his culture, yet he was interested in what was happening on the New York art scene. Seeing that we were interested in his work, he showed us a few of his paintings, which were done on thick watercolor paper. One that featured the Hopi spirit guides was titled “Kachina Song Blessings.” I thought it was beautiful and told him so. Then he showed us prints that combined Native American imagery with modernist abstraction. “I’m getting back into Kandinsky,” he said.

There was a knock on the door and a woman entered with a young boy. She was a curator from a German museum here to see Michael’s paintings. We said our goodbyes and got back on the road to continue our journey.

I felt that the Hopi Mesa had the heightened resonance that you sometimes encounter in deeply spiritual places. I wondered how much of what happened in the Hopi village had to do with the spirit of the place; the sustenance contained in the Earth and the traditions, which are steeped in a thousand years of culture. Emerson wrote that, “The student one day discovers that he is being led by unseen guides…” After our lively talk about Kachinas and Nature Spirits, I wondered if it could have been one of those unseen guides who sent me the dream that steered us to that fateful meeting with Michael. I can’t say for sure but I know that I was grateful for our visit.

Years later, my wife and I were saddened when we heard that Michael Kabotie had passed away. I would have liked to have told him that our conversation widened the way I thought about art, and added another dimension to it. After meeting him, almost every group I taught included some lessons on Native American art, whether it was making pottery, or drawing and painting Indian symbols. Exploring Native American arts and culture always seemed to fascinate my students and fire up their imaginations. In my own way, I was trying to make them aware of a great tradition. I think Michael would have liked that.

In the beginning of this essay I mentioned how the souvenirs and memories that we bring home from our excursions add richness to our lives. As Liz and I drove away from the Hopi Mesa that day, we were changed in a way, and we carried with us a wonderful memory. That serendipitous visit with Michael Kabotie took on a profound significance and stood with us long after the trip was over. That meeting had graced our journey, and turned it into an unexpected adventure.


This article is syndicated from the The Moon magazine, an online magazine of personal and universal reflections. Author Anthony Rubino is a nonfiction writer and an artist. His work has been published in Offbeat magazine and The Young Ravens Review. In December 2016, his personal essay, “Brooklyn, Circa 1970s,” was a semi-finalist in the Brooklyn Film Festival nonfiction contest. He has just completed his memoir, “Looking for Wonder; A Teachers Unexpected Journey,” which is the story of his adventures as an art teacher in the New York City public schools. He lives in New York City with his wife, and his trusty research assistants, their dogs.

Our brightest blazes of gladness are commonly kindled by unexpected sparks.
Samuel Johnson

We've sent daily emails for over 16 years, without any ads. Join a community of 246,403 by entering your email below.