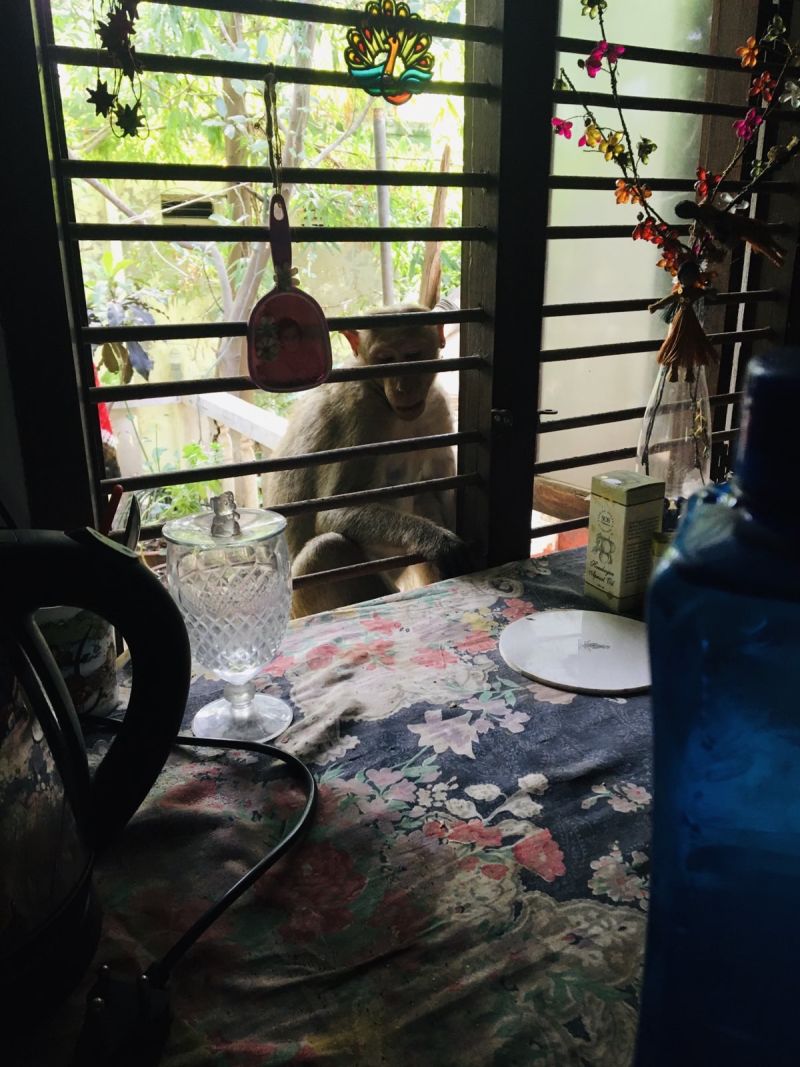 I don't remember when the monkeys first started coming to our house. Possibly, it was while I was away at college. In those days something about the long, hot bus-rides home made me sleepy in a way that I could never shake off completely.

At home, I listened to my parents talk about the things that the monkeys had done and though I love my parents dearly, I often felt that they were exaggerating, in their sweet, old people way, making up unbelievable stories about monkeys to hold my attention. Over time, I too would become enchanted, could not stop talking about the monkeys, telling city friends stories that they did not know what to do with.

We would know that the monkeys had come from that first swooshing sound. The sound of a heavy weight pushing down the branches of the too many trees my parents had planted in the garden.  Our little black dog Mia, would become very excited, barking and running in circles around the trees, now heavy with monkeys. The monkeys would look down at Mia and then look away to the side, bored. They knew, almost immediately that  she was a dog who could be dismissed; she would not hurt them.

If she got close to a monkey, Mia would not know what to do next. But still, she is compelled to go out in the garden and bark impressively. She will look you straight in the face periodically to make sure that you know that there are these strange little people climbing all over the trees and the house. She will look at you and see that you too have no idea what to do about this.

When the monkeys come we have to quickly close all the windows and close the doors that lead to the balconies because if we don’t, the monkeys will come in and steal all our stuff. With their crinkly hands and perfect little finger-nails they reach in and grab whatever they can—safety pins, fruit, glass beads. If the doors are open they walk in and take entire bunches of bananas off of the dining room table.  If my parents had told me this, I wouldn't have believed them but one heavy Wednesday morning, I walked in on a monkey doing just this. I watched in stunned silence as he looked at me, tucked the bunch of bananas under his arm and walked out again.

In the past, the monkeys have opened small bottles of half dried oil paints because you know, opposable thumbs. They have dabbed their fingers into the paints (because, you know, curiosity) and proceeded to wipe their colourful fingers all over my mother’s nice white walls in an attempt to remove the paint which they had at this point discovered, they could not eat. Left behind on the walls are unique yellow and green streaked examples of early 21st century monkey art. The monkeys have also opened taps to drink water and drained the overhead water tanks because they don't believe in turning taps off when they are done.

Our next-door neighbours are loud and bicker among themselves frequently but they are also kind-hearted and they do not chase the monkeys away. They leave cooked rice out for the monkeys and watch through the grills as they fight and push and eventually sit around in a circle and eat the rice with their hands, one mouthful after the other. Once they have eaten, the monkeys are quiet and full and lean back on their arms like members of a contented family at the beach, watching the waves.

There are monkeys that visit my friend's mother's garden nestled in the Nilgiris and they like to uproot bulbs and toss them aside with much contempt while Aunty warns them to stop immediately. They look up at her and pause, hands over the freshly emerging shoots and they ask, ‘ You mean these ones?Don’t touch these? ‘ And then, while never breaking eye-contact with Aunty, they uproot the lovingly planted bulbs and toss them aside, not because they are hungry but just because they can.

The monkeys in Hyderabad climb up into apartments through kitchen balconies and open fridges and help themselves to plates of cut papaya, cool and sweet, perfect for hot dry summer days.

When my mother was away at college so many years ago, she remembers the monkeys that used to come to her hostel and how they loved to steal combs and small hand-held mirrors. They would then sit in the trees and comb their monkey hair while looking at themselves in stolen mirrors, mocking everything that my mother and her friends had achieved with their education and their steel trunks and their occasional letters to their fathers. In Madurai, the monkeys have learned to unlatch locked doors by slipping their hands in the small spaces underneath. They break into the eye hospital and drink various medicines from brown bottles that leave them staggering drunk but perhaps with very good vision.

The monkeys in Chidambaram have learned to open the doors of the many tourist buses that come here, as part of ambitious tours that take the restless, the unlucky and the pious to an auspicious number of temples over the course of an auspicious number of days. On arrival, the tourists will stumble out of their colourful buses in front of the ancient temple, messy haired, unsure of where they are or who they are going to see. They leave behind their luggage tucked under their seats and their footwear tucked under their luggage. They take with them their water bottles and loose change. As soon as they leave, the monkeys open the bus-door and climb in, one by one. Inside, they rummage through luggage. They quietly and efficiently remove from the bus all biscuits and offerings from the other temples these weary pilgrims have visited on the way here—bananas, coconuts, small palm-sized mangos.

When the tourists return to their buses with crushed flowers in their hair and ash all over their noses and ground into their palms, they will find all their biscuits gone and they will think that their fellow pilgrims are shameless biscuit thieves. If the bus driver's underage helper tries to explain that monkeys have stolen all the eatables on the bus, the pilgrims will think, this bus is run by shameless biscuit thieves who will not hesitate to stoop so low as to blame their thievery on monkeys. With such uncomfortable and at times openly hostile feelings, the bus will wind its way out of Chidambaram in search of other gods and other temples.

It is hard to hold a grudge against the monkeys. The monkeys that visit our house are curious and alert and when you see the curve of their shoulders as they lean against a wall, or the way the little ones’ hair seems to have perfect middle partings. It is hard not to love them, the monkeys  that come and mess up the garden and break the drainpipes.  The monkeys who steal things and break things and leave suddenly.

When they arrive, the monkeys bring with them the joy of the crowd, the thrill of jumping and swinging and not having to listen to anyone.  I believe that all of us, at some point or another in our lives, on a rare family outings with cousins, we have all acted like this.  Thrilled with the sounds of our voices, the strength in our bodies, happy to be alive, not thinking of what will happen next.

The best part about the monkeys visiting us is that we now have monkeys stories that really are the best kind of stories. When we tell other people they will laugh and think we are lying to entertain them. We are all secretly proud of how clever these monkeys are, even as we tell these stories of anarchy and destruction. We are bragging when we tell these stories because we love these monkeys in ways that are hard to describe.

The monkeys are here with us. They are growing and learning and playing on the outskirts of our lives. These cities do not dull them, they are unfazed by the traffic and the cruelty of strangers. They see the chaos of this hard world and without hesitation, they jump right in.

Snigdha Manickavel was born and raised in Canada, then transplanted into a small town in south India. She is a gold medalist from Madras University and has experience working in the social sector. She is the author of A Silent Revolution: The Journey of the Srinivasan Services Trust. Her work has been published in Parabola, National Geographic Traveller, Open, The Indian Express, and The Hindu BusinessLine. She lives in Chennai.

The walls between art and engineering exist only in our minds.
Theo Jansen

We've sent daily emails for over 16 years, without any ads. Join a community of 162,759 by entering your email below.