Buddhas on Death Row: A Bridge of Art & Friendship

Buddhas on Death Row was born out of the collaboration of two pen friends, based in the United States and Finland. Their names: Moyo and Maria

What follows is the transcript of a letter Moyo typed out to Maria from Death Row.  Using the pages of a discarded atlas for stationery, he answers her questions regarding his relationship to art, shares his perspective on solitary confinement, and conveys with dignity and eloquence, the transformation that the human spirit is capable of even in the midst of darkness...

I was always fascinated with art and how others were able to make pictures but my idea of art before and well into my incarceration was limited to picture making for the sake of making pictures that were appealing. I never imagined that art can be used as a bridge between two points on the map of life, or two people. 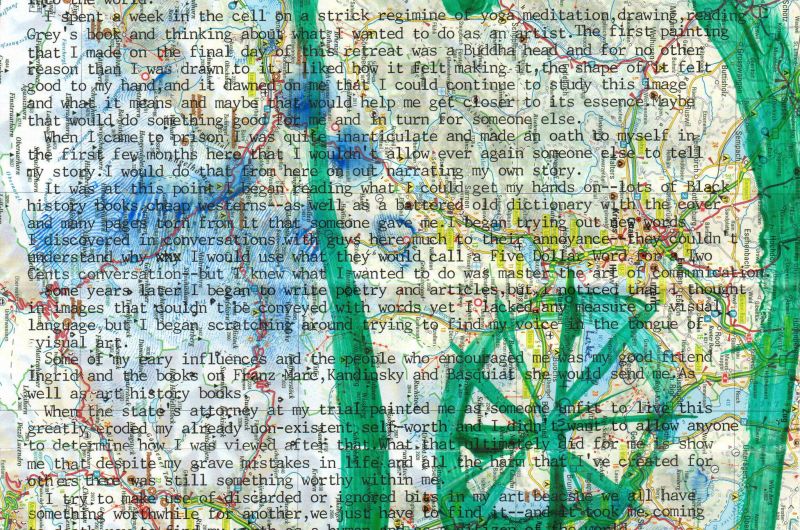 When I came to prison I was quite inarticulate and made an oath to myself that I wouldn’t ever again allow someone else to tell my story. I would be the one from here on out telling it.

I began reading what I could get my hands on – including an old dictionary with the cover and many pages torn from it that someone gave me. I began trying out the new words I acquired in my conversations with guys here, much to their annoyance for they couldn’t understand why I would use what they would call a Five Dollar word for a Two Cents conversation.

But I knew that what I wanted to do was master the art of communication.

Some years later I began to write poetry and articles but began noticing that I thought in images that couldn’t be conveyed in words. Yet I lacked any measure of visual language. I began scratching around trying to find my voice.

Some of my early influences and the people who encouraged me was my good friend Ingrid and the books on Franz Marc, Kandinsky, Basquiat and art history books that she would send me, as well as the art sections of newspapers clandestinely passed from inmate to inmate as passing newspapers here is illegal.

For a long time, I spent my time dealing with difficult emotions within the space of my art. Most of it was filled with pain, anger and sadness and in no way could I say that the work would serve as balm or inspiration. It was simply my worst in image form.

Then, after some years of this and after reading Alex Grey’s book The Mission of Art, I realized that art can be used to uplift and heal.

Reading Grey made me evolve my idea of art further beyond a rubber room where I’d wild-out, into finding a sacred space within me and then bringing that sacredness, that specialness of life I found within, out into the world.

This is when I began making the Buddhas.

When the state’s attorney at trial painted me as someone unfit to live, this greatly eroded my already non-existent self-worth, and I didn’t want to allow anyone to determine how others viewed me after that.

What that ultimately did for me is show me that despite my grave mistakes in life and all the harm that I’ve created for others, there was something still worthy in me.

I try to make use of discarded or ignored bits in my art because we all have something worthwhile for another, we just have to find it – and it took me coming to death row to find my worth as a human and as a citizen of the world.

I have committed some grave acts in my life and I will never be able to undo them. Yet the very least I can do is to improve myself.

It is my hope that someone else will also take control of their narrative and tell themselves a new tale, a grander story of themselves. For all of our benefit. 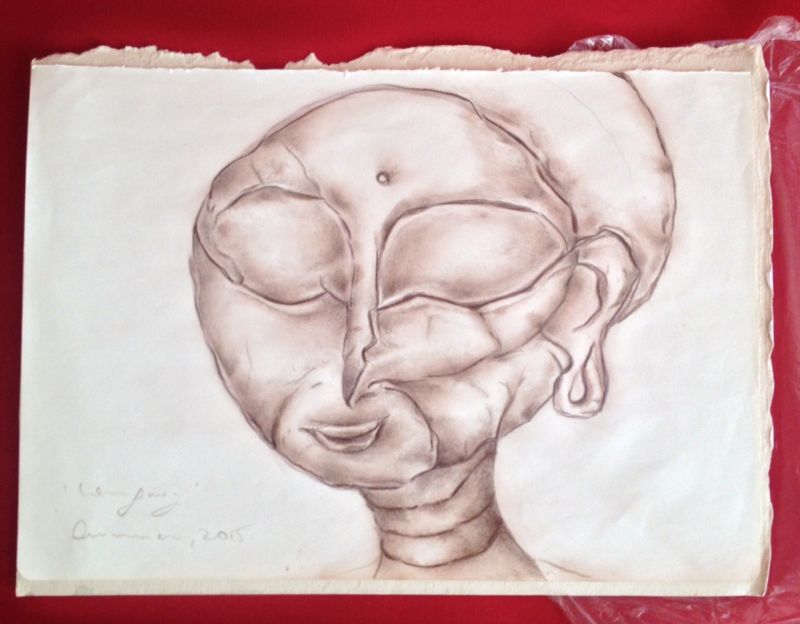 Reggie once told me that we could use these cells like meditation cells used by monks in monasteries.

But prison is not a monastery. And although I may do my best to take advantage of the opportunities I have for genuine practice in the confines of this cell, to lose touch with what the cell is intended for would be a mistake.

It would first be me not seeing things for what they are which is something that my practice encourages me to do at all times: to see things correctly.

It would also not serve my commitment to raising awareness on the inhumanity and destructiveness of the solitary cell. I'm committed to helping keep this conversation going till we see some change.

***
Funny how the thing set to kill you is the thing you use to heal you. The solitary cell is the best sparring partner for the prisoner it holds. It is the best guru, the best teacher.

Strange, I know, but it is true.

I have learned to wait this cell out with the patience it has enforced on me. I no longer scream out in agony in the grip of the cell’s silence.

I know that if someone came out of here after four decades, I should be doing fine in my decade and half. I’m just getting warmed up.

But so is this cell.

I don’t expect to ever be let out of solitary confinement alive.

I could die next year, I could die this year. I don’t sense an overwhelming anxiety about this.

What I am most concerned with is spending my time in worthy ways. What bothers me is that I am a waste to others here. In the movie The Matrix, humans still served some purpose. They were fuel! Here, my purpose is none.

Stick me in front of a camera and let me talk to some at-risk kids. Teach me to knit so I can make some blankets for the homeless. Let me donate some blood or some organs!

I am a healthy male. When I am executed, I won’t be able to donate any of my organs because at that point they will be ruined by the chemicals [...]. 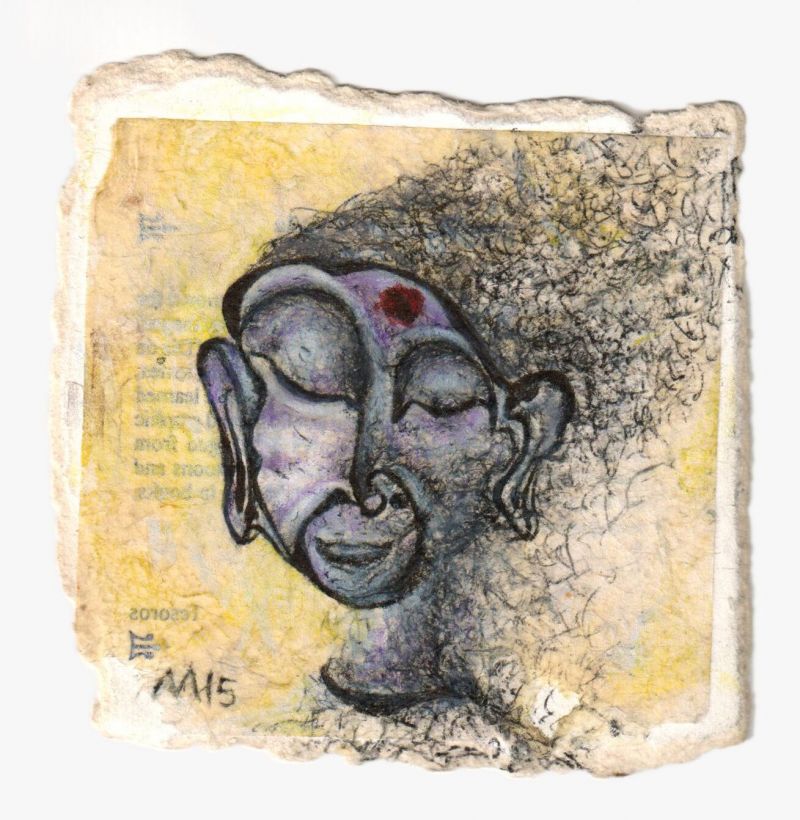 At the age of 18, Moyo killed two people. He was sentenced to death and for the past fifteen years, he has been held in solitary confinement on Death Row. There, in his own words, he is working to “polish his soul, clean stains from his heart, and open windows of his mind.” Locked inside a cell smaller than a parking spot, Moyo began a quest of self-discovery. In an effort to understand and reclaim his own narrative, he became an avid reader, delving into books on black history, art, the justice system, psychology, spiritual texts, fiction and more. He began making art as a means to explore his own experiences and emotions. Deprived of nearly every form of social interaction, he began to communicate with people in the outside world through letters. Once, from a neighboring cage in the recreation yard, a fellow inmate introduced Moyo to yoga and meditation. In the years that followed, Moyo committed himself to a regular practice.

Moyo (Swahili for heart / spirit) is a brush name adopted by the artist.

Syndicated with permission from Buddhas on Death Row. A project that brings to light a profound journey unfolding in the darkest of places, and a testament to the power of art, inner cultivation, and friendship.

The best way out is always through.
Robert Frost

We've sent daily emails for over 16 years, without any ads. Join a community of 243,021 by entering your email below.