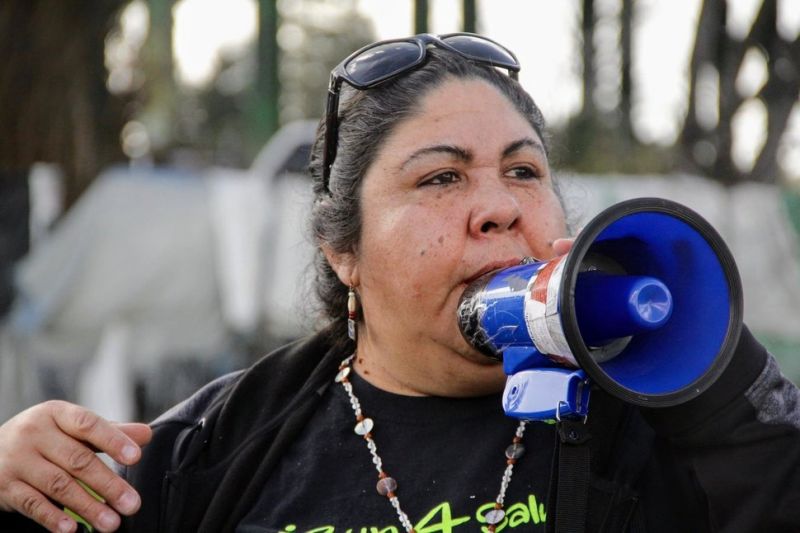 In the San Francisco Bay Area, demand for land seems endless. Property values are sky-high, rents are backbreaking, and people just keep coming. Over 2 million more are expected to settle here by 2040. Bulldozers and backhoes reshape neighborhoods. Cranes dominate the horizon. Land, with a home or high-rise plopped atop, can build a fortune for its owner.

Today’s land rush is nothing new. For more than 200 years, there has been a run on Bay Area real estate — a relentless wave of colonization, then suburbanization and now gentrification that left the Ohlone, the Bay Area’s first people, landless.

“Nobody knew about us,” said Corrina Gould, a Chochenyo and Karkin Ohlone leader and activist. “There was this process of colonization that erased the memory of us from the Bay Area.”

Gould and her partner in crime Johnella LaRose, who is Shoshone-Bannock and Carrizo, founded the Sogorea Te Land Trust in 2012 to reclaim Ohlone land in the Bay Area.

“It’s about decolonizing our own minds and taking back what is ours,” Gould said of their grassroots, woman-led organization. “We are going to be extinct if we do not take care of all of these things.”

In January in East Oakland, on a small urban farm tucked between the Southern Pacific Railroad and the Nimitz Freeway, the food justice organization Planting Justice gifted a quarter-acre of its 2-acre property to Sogorea Te. “We have always believed that reparations are necessary,” said Gavin Raders, Planting Justice’s executive director. “One way we wanted to do that is to put the land in the Sogorea Te Land Trust.”

Four generations of Ohlone shared prayers and songs in a ceremony attended by about 100 community members. Gould and LaRose lit a sacred fire, the first on Ohlone-owned land in over a century.

“It may not look like much or look like it means much, but it’s so important to us,” LaRose said. “Even if it’s a postage stamp, it doesn’t matter. We are getting the land back.”

Attendees led a prayer walk 7 miles down International Boulevard, East Oakland’s main artery, to the Intertribal Friendship House, the community center that is the heart and lifeblood for the Bay Area’s urban Native community. There, supporters shared a meal, discussed future possibilities for the Sogorea Te Land Trust, and celebrated their first experience of liberated Ohlone land.

“We are just trying to say to the universe that we are here,” LaRose said. “We are going to look for these plots of land, and we are going to transform them.”

The group is planting community gardens and creating ceremonial spaces on the repatriated land. Someday, group leaders want to build a traditional roundhouse to bring back Ohlone songs, dances and ceremonies.

Once Planting Justice clears the plot of all debt — about $600,000 in mortgage payments — the organization will transfer the full 2 acres of its East Oakland urban farm to the land trust.

“We want to make sure that the land stays in indigenous stewardship until the waters rise up and make it something else,” Raders said.

Raders is not alone. Word of Sogorea Te has spread, and Gould and LaRose are fielding calls from parties interested in repatriating their lands to the group. Nonprofits, community-based organizations, faith groups, LGBTQ groups and affluent citizens are lending support. Sogorea Te created a Shuumi Land Tax (shuumi means “gift” in Ohlone) as a way for non-indigenous residents on Ohlone territory to contribute to paying down moral debt to the land’s first people with tax-deductible donations — an indigenous twist on the nonprofit model.

In the land of the San Francisco liberal, Berkeley hippy and Oakland radical, support for this indigenous cause is perhaps unsurprising. “In general, it’s beautiful that we are in the Bay Area because we get all of this support,” Gould remarked.

Beth Rose Middleton, a professor at the University of California, Davis, and board member of Sogorea Te, said land trusts — typically used by private conservationists — can serve as tools for decolonization. For tribes like the Ohlone, which do not benefit from federal recognition and have no reservation lands, land trusts can be especially powerful. Gould and LaRose are using the master’s tools to dismantle the master’s house.

“These tools can be used in ways never imagined in the colonial time they were created,” Middleton said. “You are almost taking [land] out of this capitalist regime to bring it into indigenous ownership.”

The Bay Area first showed up on European maps amid an imperial scramble to control the Americas’ indigenous lands, lives and resources. Between 1776 and 1833, the Spanish built 21 Catholic missions in California to claim Native lands and convert Native souls. By the end of their reign, Franciscan missionaries had baptized 81,586 California Indians and buried some 62,600, who perished from disease, displacement and starvation. Gould’s ancestors were among them.

Under Spanish, Russian and Mexican rule, California’s Indian population fell by more than half, from 310,000 in 1776 to 150,000 when the United States annexed California in 1848. Coastal populations like the Ohlone were particularly devastated.

As indigenous humanity was denied so too were indigenous land rights. California was the only part of the United States declared terra nullius, a legal term meaning “nobody’s land.” All up and down the Golden State, Native communities were left without title to their lands. By 1910, the Bay Area’s Native population numbered just 184. Survivors went into hiding, adopting Hispanic identities to avoid persecution.

Still, indigenous people persisted. A few dozen Ohlone and Miwok, Gould’s ancestors among them, established a small settlement in the 1870s called “Indian Town” in present-day Pleasanton. There, on the outskirts of the Bay Area, they survived in silence. But by the start of the 20th century, the people of Indian Town had dispersed into anonymity.

Gould grew up knowing that she was Ohlone, but her mother’s generation rarely talked about what that inheritance meant. “It’s this historical trauma that still sits with us,” Gould said. “It’s really fresh.”

Since the 1970s, however, Ohlone people have worked to revitalize the language and culture and to reassert their rights to ancestral lands. In the effort to pull themselves and their people out of the historical abyss, they have rediscovered their power.

Gould and LaRose established Indian People Organizing for Change in the 1990s, a grassroots Bay Area Native organization. During the Bay Area’s first dot-com boom, they were contacted by construction workers finding Ohlone burial grounds, known as shellmounds, beneath development projects across the region. IPOC led a series of campaigns and prayer walks to protect their ancestors’ graves and raise awareness about enduring Ohlone presence. “Because of the work that we’ve done with IPOC, we made it cool to be Ohlone again in the Bay Area,” Gould said with a laugh.

In 2011, IPOC led the 109-day occupation of Glen Cove, a sacred gathering place and burial ground known as Sogorea Te in Karkin Ohlone language, slated for redevelopment. Gould, LaRose and the Protect Sogorea Te coalition prevailed, and the city of Vallejo negotiated a cultural easement empowering the federally recognized Yocha Dehe and Kletsel Dehe bands of Wintun to protect these sacred ancestral sites. That was the first indigenous rights agreement signed in an American city.

“Standing Rock and Sogorea Te took a lot of fear away and opened our mind up to what could be next, what could be possible,” LaRose said.

Lessons learned during the occupation of Glen Cove led Gould and LaRose to establish the Sogorea Te Land Trust. This month, the group closed on its second piece of land, a small garden at 30th and Linden streets in West Oakland. The group is also working to build a ceremonial space on its East Oakland property -- a process that entails erecting an arbor and re-creating Ohlone laws and protocols that define what is sacred. “We are transforming the land and the land is transforming us, making us behave, so to speak,” LaRose said.

They have invited the surrounding community to participate in a collective process of discovering what it might mean to be free on Ohlone land.

“We are all human beings on this land,” Gould said. “We need to learn how to live in reciprocity together.”

Syndicated from HuffPost’s “This New World” series. The series is funded by Partners for a New Economy and the Kendeda Fund. All content is editorially independent, with no influence or input from the foundations. If you’d like to contribute a post to the editorial series, send an email to thisnewworld@huffpost.com

Whatever you do, make it an offering to me.
-Bhagavad Gita-