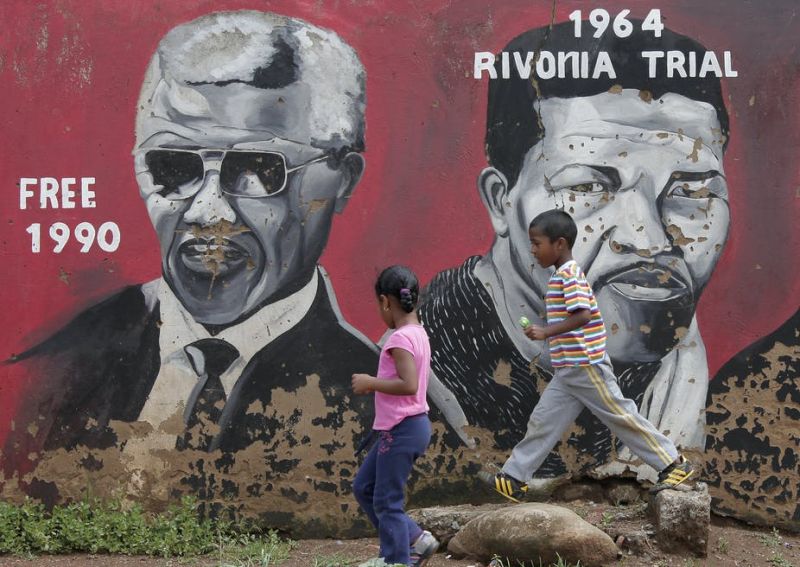 As Black Lives Matter protests, triggered by the killing of George Floyd, spread across the world in response to systemic racism and police brutality, questions are being asked about how white people can lend their support. Our previous and ongoing research into the South African anti-apartheid movement provides four key lessons we can draw on today in the fight against racism.

1. Use privilege to support the oppressed

The first lesson is that privilege, conferred to some by the system, can be used to support the oppressed.

The African National Congress (ANC) launched its Defiance of Unjust Laws Campaign in 1952. Although the campaign did not succeed in overturning repressive legislation, it boosted the membership of the ANC, cemented the leadership of people such as Nelson Mandela and Walter Sisulu, and created close cooperation between different racial groups against apartheid.

Black activists called on white activists for support, ranging from using their telephones, hosting meetings, to providing financial resources. In 1961, activist Harold Wolpe, using a front company, helped the South African Communist Party buy Liliesleaf Farm in Rivonia on the outskirts of Johannesburg. Activist Arthur Goldreich then moved with his family to Liliesleaf, which became the secret headquarters of Umkhonto we Sizwe, the ANC’s armed-wing, where the banned leadership would secretly meet. Disguised in a white suburb, there was initially little suspicion that the farm was used for anti-apartheid activities.

A further tangible act of opposition to the regime was the refusal to serve in the armed forces. By the 1980s, more than 23,000 young men had refused to be conscripted into the South African Defence Force, which was increasingly deployed to suppress uprisings in townships. As a constructive alternative to military service, the End Conscription Campaign proposed a range of community development programmes, such as painting a hospital ward or clearing a plot of land, in support of and in consultation with township civic groups.

In drawing on their privilege to support the struggle, white anti-apartheid activists were frequently ostracised by other white people. Bram Fischer is a prime example. Born into a prominent Afrikaner family, Fischer rejected Afrikaner nationalism. He later defended Mandela at the Rivonia Trial in 1963, where Mandela was convicted to life imprisonment, narrowly avoiding a death sentence. Fischer was later sentenced to life imprisonment for his anti-apartheid activities.

The second lesson is that those with privilege have a responsibility to educate others who hold that same privilege.

While white allies did offer benefits to the movement, some black activists felt white activists were shirking the more difficult task of confronting racial attitudes in their own neighbourhoods. They preferred the excitement of travelling to the townships, where they were welcomed with “big cheers from the people”.

Steve Biko, founder of the Black Consciousness Movement, rejected this perception that white people were allies. In 1971, he argued that it was “impossible” for white liberals to totally identify with oppressed black people “in a system that forces one group to enjoy privilege and to live on the sweat of another”. Instead, he said: “The liberal must fight on his own and for himself.”

In the 1980s, white activists, most notably through the Johannesburg Democratic Action Committee, an affiliate of the non-racial United Democratic Front, did pay greater attention to the white population. They made important gains in educating and mobilising white people against apartheid through the Call to Whites Campaign, which helped to weaken the power of the regime. They were also able to continue to mobilise when their black counterpart organisations were restricted. 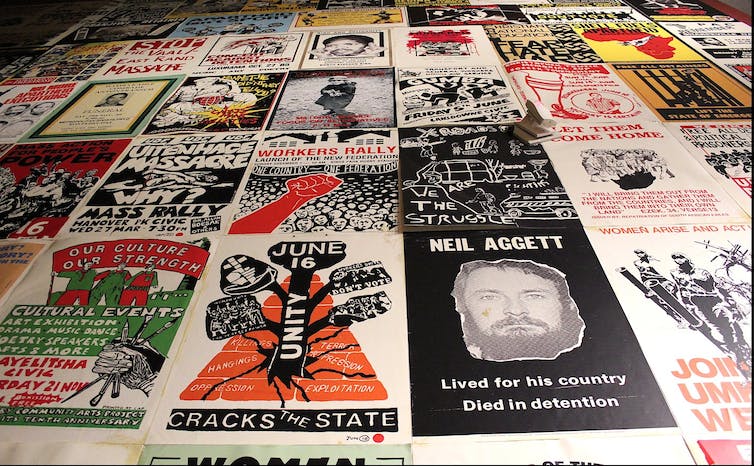 Anti-apartheid artwork at the Apartheid Museum in Johannesburg. Kandukuru Nagarjun/Flickr, CC BY

3. Put your bodies on the line

The third lesson is that two people, in the same space, taking the same actions will not be treated the same. And that those with privilege can put their bodies on the line for the sake of others.

Throughout the anti-apartheid struggle a number of white activists including Denis Goldberg, Jeremy Cronin, and Raymond Suttner were imprisoned for a range of activities in the struggle against injustice. Out of the 156 people charged at the Treason Trials which began in 1956, 23 were white, including prominent activists Joe Slovo, Ruth First, and Helen Joseph. Ironically, according to Lionel “Rusty” Bernstein, one of the accused, the trial strengthened the personal and political relationships across racial divides – the opposite purpose of apartheid legislation.

As one of us, Leonie Fleischmann, argued in research on Israel and Palestine, the physical presence of members of the ruling population at protests has clear advantages. Lethal weapons are less likely to be used when Jewish-Israelis are present at Palestinian protests and they are unlikely to be treated badly if detained. Parallels can be found in South Africa, where conditions for white prisoners were markedly better than those for their black counterparts.

Helen Joseph described her arrest in 1956 alongside her black partner in the Federation of South African Women, Lillian Ngoyi. Joseph describes how she had a bed, sheets and blankets, whereas Ngoyi slept on a mat on the floor. Joseph had a sanitary bucket with a lid, whereas Ngoyi had an open bucket covered with a cloth. As Ngoyi exclaimed to Joseph as they were carted off: “You are better off with your pink skin”. Apartheid remained even in prison. 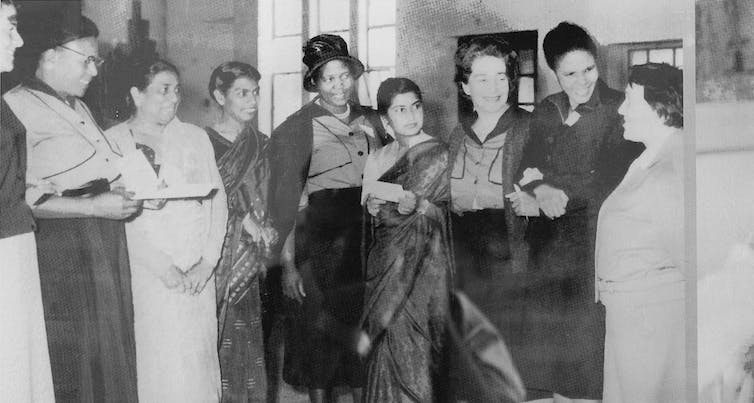 Members of the Federation of South African Women in 1955. Nagarjun Kandukuru via Wikimedia Commons, CC BY-SA

The fourth lesson is that members of oppressed groups must be the ones to lead the struggle and decide the role of allies.

The involvement of white activists in the anti-apartheid struggle was not universally welcomed. The Congress Alliance, a multi-racial coalition of anti-apartheid organisations was established in the 1950s. Yet, to mobilise the black population, the ANC initially felt it necessary for these congresses to remain separate.

At joint meetings of the Congress Alliance, the white Congress of Democrats was criticised for dominating. And in 1959, the Pan-Africanist Congress split from the ANC because it feared the struggle would be dominated by white communists. Others argued that there was no place for white people in their struggle.

Still, the adoption of the Freedom Charter in 1955 at the Congress of the People, a large multi-racial gathering of the Congress Alliance, had showed that most anti-apartheid activists recognised that “black and white” should “strive together” until “the democratic changes … have been won.” Alongside this message of non-racialism and joint struggle, it was made abundantly clear that freedom for the African people was at the heart of the movement.

As A B Ngcobo, a member of the ANC Youth League asserted in 1987: “The Africans, that is their struggle in the first place, and they’ve got to lead that struggle.”

Those who do not experience oppression are not best placed to make decisions on how to overcome it.

As the anti-apartheid movement in South Africa shows, mobilising white privilege can be a useful tool for advancing the struggle against racism. Yet, the fight must be led by those who are oppressed by it. White allies must show up, listen and put their bodies on the line.

Correction: This article originally stated that Arthur Goldreich and Harold Wolpe bought Liliesleaf Farm themselves, but it has since been clarified.

Join this Saturday's Awakin Call with Lindy and Francis Wilson: "Lessons from the South African Freedom Struggle: Using White Privilege for the Liberation of All". More details and RSVP info here.


This article is republished from The Conversation under a Creative Commons license. Read the original article. Leonie Fleischmann is a lecturer in International Politics, City, University of London, Matthew Graham is a Senior Lecturer in History, University of Dundee

The most interesting thing in the environment is your own mind.
Sherry Turkle

We've sent daily emails for over 16 years, without any ads. Join a community of 242,655 by entering your email below.