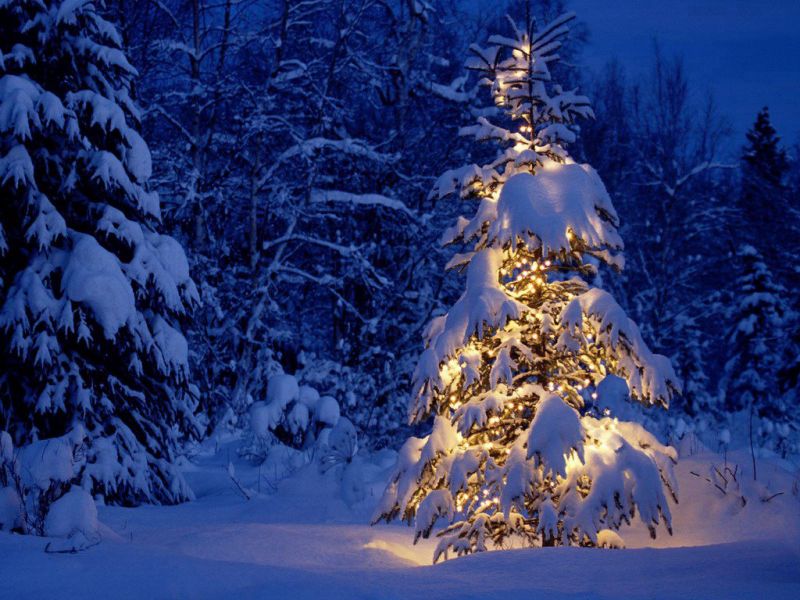 My mother was a single mom, and I was her only child. We lived in the ’60s in the city in a tiny apartment. My Aunt Rose and cousins lived next-door. Every December my mom spread the word to anyone alone on Christmas Eve that she would be having an open house. My mom believed that no one should be alone during the holidays. If she could, she probably would have put an ad in the paper inviting the world.

As it was, our tiny apartment was stuffed, every room but my bedroom filled with partying adults on Christmas Eve. Sleep was impossible, but I tried to fall asleep anyway because Santa would not leave gifts for little girls who were awake (so I was told). As I lay in bed, I wondered how Santa would even know I was asleep amid all the noise and how he could sneak in and leave gifts with all those people around.   The adults in my life explained this too.  The grown-ups all knew Santa, it seemed. Only children weren’t supposed to peek.

Every year at midnight, my mom brought me out to the living room to open the gifts Santa left and then the gifts from friends gathered around. It was a Christmas tradition and quite magical and exciting. I was possibly the luckiest kid in the city.

The Christmas Eve Open-House tradition continued, even when we moved to the suburbs.  I was about 12-years old and in the sixth grade.  Our new apartment had manicured lawns, flower beds, and beautiful trees right outside our door. My mom managed the complex so, as part of her salary, we got to live in a lovely, one-bedroom apartment.  That first Christmas there, my mom invited anyone she met who she learned would be alone on Christmas eve — neighbors, co-workers, shop girls, the postman…the list went on.

When I was a freshman in high school, we moved into a two-bedroom apartment in the same complex.  It was lovely to have my own room now.  Not long after we moved in, a new neighbor moved in next door.  His name was George, and he was an older gentleman. He always nodded a greeting when he saw us. It was around Thanksgiving when we saw him park in his space near ours.  We were bringing in groceries, and my mom asked him if he had plans for the holiday. When he said no, that he would spend it alone, my mom mentioned her open house on Christmas Eve.

“Please join us,” she said. He was already shaking his head no.

“I won’t be good company, I’m afraid,” he said. “I lost my wife a few months ago.” His eyes filled with tears and he turned away. “Thank you anyway!” he called. He went into his apartment and quietly closed the door.

My heart nearly broke in half when he said that. I decided right then and there that, from that day on, I would do whatever I could to make this dapper older gentleman named George happy. Over the next few months on the way home from school, I would often find a flower or an interesting plant to leave on his doorstep. Once I found the skin shed by a cicada and left that. I don’t actually know whether he appreciated the bug skin, but I found it fascinating.  I never told George the gifts were from me.  I dropped them on his step and then hurried inside to my apartment next-door.  I found all sorts of things to leave on the way home from school.

When the snow came, I wrote messages on his stoop, “Hi George!” and a smiley face.

I really thought I was being sly. I really didn’t think he knew it was me. Then one beautiful spring day toward the end of the school year, I was about to leave a wild rose on George’s doorstep when the door opened.

“Hello my dear,” he said. He smiled. I was embarrassed and startled.

“I know you’ve been leaving me little notes and gifts,” he said. “It means so much to me. I find myself looking forward to these little gifts. You have no idea how much happiness you have given me over the past several months. Would you like to come in?”

I hesitated. I didn’t know him. Not really. He understood.

“Tell you what. Perhaps you and your mom would like to be my guest for supper sometime. I make very good chili!”

We did join him for supper.  He was right — he made great chili.  And so, our friendship began. George came to the open house that Christmas Eve, though he only stayed a little while.  When I got home from school, we sometimes went for walks together.  Once in a while, George treated me to lunch or took both my mom and me to supper when she had the time. When he traveled, he always sent me a postcard and brought me back a little gift.

When I was 19-years old and at college, I got a call from my mom that George was in the hospital. When I went to visit him, a smile lit his face.

“This is my best friend,” he said to his brother, Walter, and he introduced us. I could see Walter was surprised by this beautiful title “best friend” given to a teen by his brother. I was honored, but also very worried about my friend.

Walter met me outside the door and gave me the news that broke my heart again. “He doesn’t have long. The cancer is everywhere.”

After I composed myself, I went back inside to sit with George for a while. There was so much I wanted to say. It was difficult for him to talk. The pain was quite bad. I told him how much he meant to me, how much I loved him. He grabbed my hand. His grasp was weak but warm.

“My best,” he said again. He smiled and drifted off to sleep. That was the last time I saw him.

The Christmas after he died, there was a knock on our door on Christmas Eve day.  It was a bouquet of Christmas flowers and pines, a beautiful display, addressed to my mom and me.

“Before he died, George asked me to make sure you got this on Christmas Eve. He said your friendship helped him through one of the hardest times of his life. Thank you for being such good friends to my brother. May God Bless you this Christmas, and always. Walter.”

Every Christmas Eve, and quite often throughout the year, I look up and say hello to my friend George. My heart is full as I remember this beautiful gift he arranged for us before he said goodnight to the world. Our friendship began simply, with a little gift on a doorstep. It became one of the most defining and beautiful friendships of my life.

Dot Matrix is a pen name for a KindSpring vounteer who feels the world and wants to help heal the world. You can read more her stories here.