Home > News > Jolanda van den Berg: We Are Each Other. No Victims, No Heroes:

Jolanda van den Berg: We Are Each Other. No Victims, No Heroes:

Jolanda van den Berg defies the conventional labels our world has to offer. Over the last quarter of a century her work has touched and transformed the lives of thousands of put-at-risk children in Peru. She has created a series of boutique hotels,  and offers private 1:1 sessions with people struggling with various kinds of life challenges. By some definitions, this mother of two might be dubbed a philanthropist, a social entrepreneur, a life coach, or even a mystic. But Jolanda's expansive life resists reductive titles. No neat label could possibly capture the rippling quality of her compassion, her sheer genius for hospitality, or her breath-taking artistic flair-- let alone the depth of her realization of life's 'is-ness'. Perhaps the simplest way to capture the spirit of her journey is to say she is a woman who never let the improbable stand in the way of following the dictates of her heart.

In 1995 thirty-year-old Dutch woman a van den berg flew to Peru to see the pink dolphins of the Amazon. While stuck in Cusco (the ancient capital of the Incan empire,) she was soon captivated by the children tumbling through the streets. Children with torn clothes and shining eyes making a living—or trying to—as laborers carrying heavy loads, hawking postcards, or shining shoes. Jolanda purchased more postcards than she had earthly use for, and found herself getting her shoes shined twice a day. One early morning she attended Mass in the cathedral at the Plaze de Armas. The church was freezing but the spiritual energy in the atmosphere was palpable. She didn't speak for nearly an hour afterwards. When she broke the silence, her first words to her companion were: “I’m going to do something for those children.”

After swimming with the dolphins in Iquitos, Jolanda flew back to her job in the Netherlands. Six months later she was in back in Cusco—after having quit her job and sold her possessions. She had no concrete plan, little money, and spoke no Spanish. But her resolve was clear—if she could help even a single child, that was enough. She rented a room, and within a couple of months she had adopted two boys off the street. Two grew to four, and before long there were a dozen boys in her charge. The Youth Court magistrate awarded her parental control until they turned 18. Most of the children were preteens, the youngest was three years old. “His mother was in jail for the murder of his father—in self defense. I had to take Oscar,” says Jolanda simply. 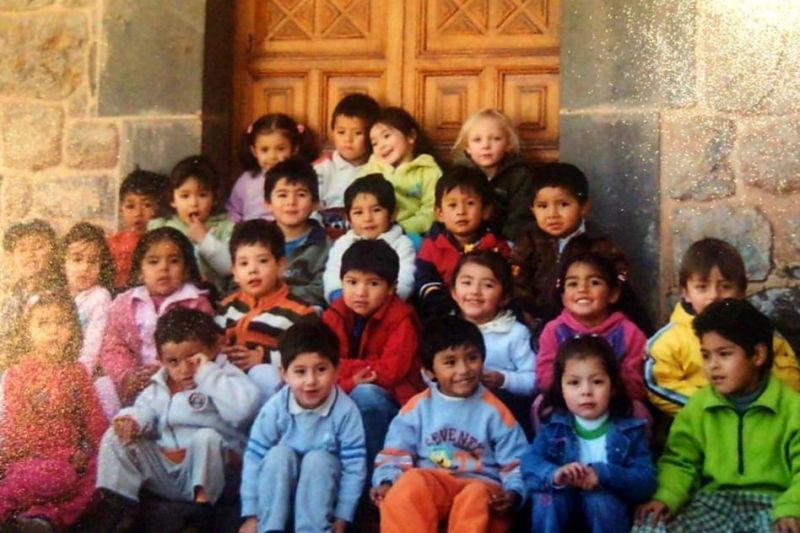 "It's not difficult to see, that blond one in the back that calls me now for 16 years "mom" as me."

Twenty-four years later Jolanda and the organization she founded—the Ninos Unidos Peruanos Foundation—have transformed the lives of thousands of street children. In the beginning Jolanda wrote to all her friends and family requesting the humble sum of 5 euros a month. Their pooled contributions covered the costs of her work, but the prolonged and total dependency on external resources made Jolanda uncomfortable. Two years in, on a visit to Holland, and at the insistence of a friend, she agreed to meet met a man who had expressed deep interest in learning more about her work. At their first meeting the stranger asked about her plans and next steps. “I want to start a hotel,” said Jolanda. “How much money do you need?" was his next question.

The idea for the hotel was barely two weeks old at this point. Jolanda hadn’t thought that far ahead. “100,000 dollars,” she found herself saying. “Give me your back account and I will send the money through,” he replied. Bewildered, Jolanda asked what he wanted in return, making it clear that no control of the board would be handed over. “I just want to give you the money—good luck with it,” was the benefactor’s response. In this serendipitous way, the conditions for the next phase of Jolanda’s journey came into being.

Before long a beautiful colonial house had been purchased, and after extensive renovations, Ninos Hotel Meloc opened in 1998. Its different rooms were named after the children, and decorated with their artwork and stories. Jolanda’s natural talents as a designer, and her gift for hospitality made the hotel an almost instant success.

With the profits from the hotel she started her first Children’s Restaurant. “You could call it a soup kitchen,” she says, “But it’s much more than that. It’s not just about serving food.” Children from vulnerable backgrounds receive two meals per day here, six days a week as long as they attend primary school. In addition, the Children’s Restaurant offers daily showers, education, social skill building opportunities, regular health check ups, dental treatment, and a wide range of extra curricular activities including basketball and self-defense classes (many of the children have been abused and come from violent backgrounds). But the most important offering they receive is that of unconditional love. Everything here is designed to nurture these children’s physical, mental, and emotional well-being, while steadfastly affirming their inherent dignity.

Today Jolanda’s work has burgeoned into five only-for-children restaurants, a sports hall, two libraries, a small cinema and a hacienda with horses outside of Cusco that collectively serve over 600 children, and that are supported by her three highly-rated hotels, and several recurring and one-time sponsors from around the world. She has 80 locals on payroll, and staff is treated like family, and provided considerable benefits. Woven through all operations is an ethos that deeply acknowledges the fact that there are no distinct givers or receivers.  As Jolanda phrases it, “No victims, no heroes. We are each other.” These aren't just pretty sentiments to her—but a lived experience that she first stumbled into, utterly unexpectedly, five years ago. 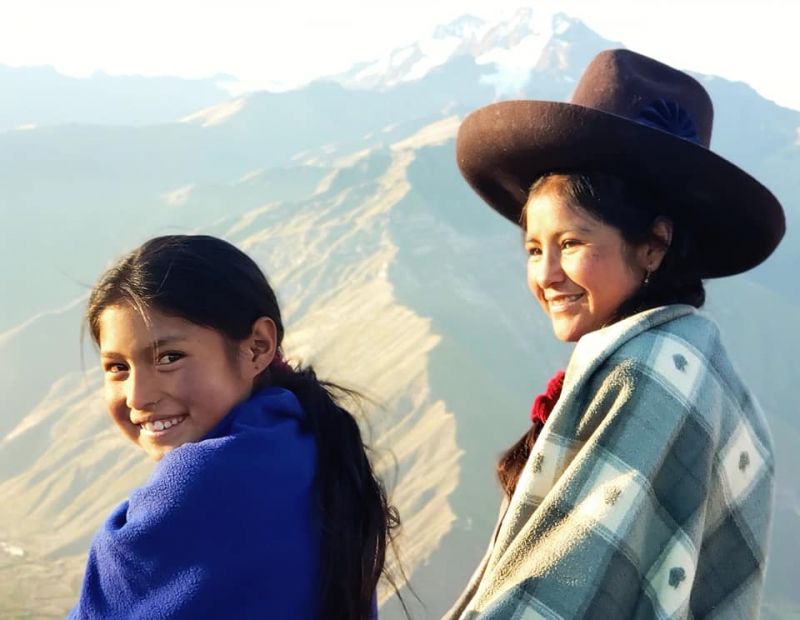 In order to protect the privacy of others involved, Jolanda doesn’t speak publicly about the details of what happened. Suffice it to say, in the immediate aftermath of a traumatic experience at knife point in Holland—Jolanda collapsed into an intense bout of shaking and sobbing, all while experiencing the unprecedented sense of her world and every single one of her existing beliefs crumbling around her. The distinct feeling was that of experiencing her own death. Eventually she fell into a deep and extended state of sleep.

When she awoke, and looked at her own reflection in the mirror, she had no clear sense of who she was. Intuitively she made her way towards the beach. Looking down she remembers feeling absolutely no difference between her bare feet and the sand. She remembered her name in that instant, but at the same time, her old sense of identity was no longer accessible. She knew with crystal clear clarity, that “Jolanda” as a fixed, separate entity, had never existed. Looking around every person she saw on the beach felt like a part of her own being. She was seized by an impulse to dash over to each one of them, and share her revelations, but stopped herself in time, knowing that it would be near impossible for anyone to understand what she was talking about. “It was like winning the lottery, but there was no one there to enjoy it,” she says with a twinkle.

What ensued was a five-year period of inner quietness. Externally she continued to grow and evolve the work of the foundation, and oversee the expansion of the hotels, and the grooming of her staff. On the surface life went on exactly as before, but the inner landscape of her consciousness had undergone a total revolution. She found herself avoiding interviews and finding it hard to speak with the old conviction about her life story – the linearity and limitations of old narratives no longer felt significant or compelling. “The ‘I’ is just the afterthought of what happens to us,” she says piercingly—it has no ultimate reality.

After a year or so had passed she began to share glimpses of her experience through Facebook posts—they were coded into haiku-like fragments—“It's not like giving my heart, it's more like having found one with a million different faces…” The posts were accompanied by exquisite photographs from her daily life in Cusco—sunrise on the rooftops of the city, curtains blowing in a sudden breeze, wildflowers on the mountainside, three elderly women in native garb walking down the street... 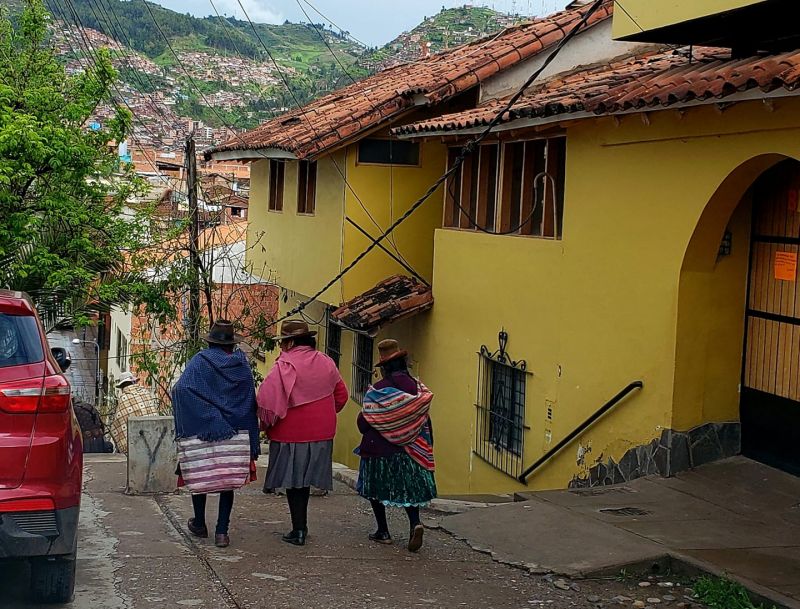 "This image of three women this morning brought a tear in my eye, the beauty is that I don't need a reason why any more..."

She wasn’t on a particular spiritual path and had no explicit teachers or guides to refer to. She thought perhaps someone online might recognize the experience she was alluding to, and reach out. It took a year, but finally someone did send her a message affirming that they knew what she was speaking of.

Over the past several years hundreds of people have sat with her 1:1, in what she simply calls “sessions,” to work through thorny, deep-rooted life challenges. Though she’s trained in family constellation therapy, Jolanda uses instead, a native approach of her own-- it involves a form of deep listening, and mirroring back to the person the place of stuckness in their stories. Jolanda doesn’t market or advertise this aspect of her work in any way – it is all driven entirely by word of mouth, and carried out alongside her other commitments.

Peru is one of countries hardest hit by the  COVID-19 pandemic. Jolanda’s hotels have been mandatorily shut for an extended lockdown period, but her generous and intrepid spirit has continued to find countless ways to express hospitality to those in need. As she considers the uncertainties of the future, there is no trace of fear or anxiety in her sparkling eyes. Her unique trajectory and its quietly profound realizations are beautifully distilled in this fragment of her writing:

Part I
She thought she knew the secret ... from the time she was a little girl she felt that every time she was swimming under water, she disappeared and became a mermaid without notice of time or space. When she came up it could have been hours or seconds, she couldn’t tell or remember. It was her secret for many, many years, through the difficult times at home. She felt she couldn’t share it with anyone-- because how could they believe that she disappeared with the water when she was under water?

Part II
Many, many moons later when she was an adult and didn’t believe anymore in mermaids, she found herself again on the beach. She looked at her feet, sand, people, sea, and suddenly all became clear... the images were there but she was gone...she and all became the same…The mermaid in the story, and the story in the mermaid…It’s that, looking at itself, through itself, as itself...without beginning, nor ending, no borders or words.. all in one as one… and so on and on and on and on... 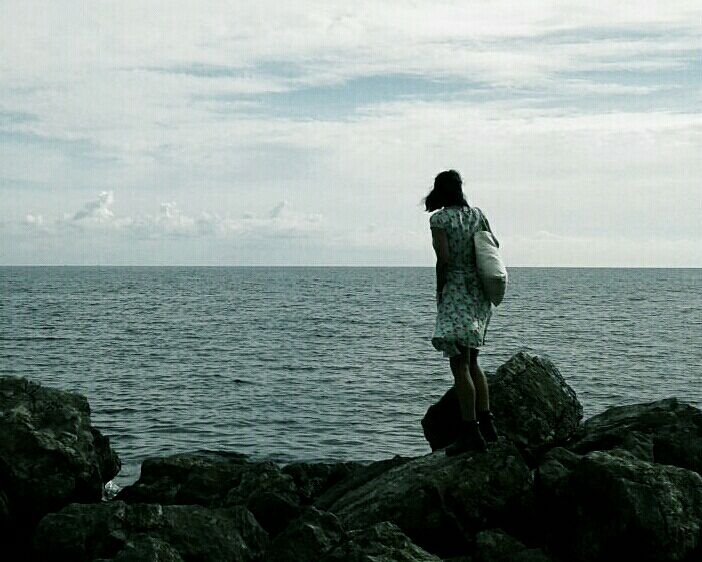 ***
Join us this Saturday's Awakin Call in conversation with Jolanda van den Berg who is enchantingly alive to the ever-present, unbounded dance of life! Details and RSVP info here.

Common sense is not so common.
Jessica Truman

We've sent daily emails for over 16 years, without any ads. Join a community of 246,024 by entering your email below.