Chung Sun-hee finely crushes eggshells, dries and saves her coffee grounds, and separates large vegetable offcuts into smaller pieces. Later, the 55-year-old professional translator will bury them in her backyard, in rotating plots of earth that are given ample time to compost before being replenished. She will plant tomatoes, basil and corn in the resulting soil.

She has a raft of little tricks to make it all work: In the summer, for example, her husband dices up the rinds of every watermelon he eats in order to make the composting process faster. “When we lived in an apartment, I would throw away all my food waste into the shared collection containers,” Chung said. “But now, I compost almost all of it.”

Chung is one of a growing number of city dwellers who are getting into urban farming, not just to grow their own vegetables, but also as an exercise in waste reduction. “Reducing food waste and the urban farming movement are very closely linked,” said Chung, who completed a government-sponsored course five years ago.

Her new habits reflect a larger change underway in South Korea’s densely populated capital, where grassroots movements and government campaigns have dramatically transformed how people dispose of their leftover food.

Once a city where unsightly and foul-smelling landfills loomed over entire neighborhoods, Seoul now operates one of the most rigorous food waste recycling programs in the world. The results have been impressive.

The South Korean government banned sending food to landfills in 2005 and, in 2013, also prohibited the dumping of garbage juice (leftover water squeezed from food waste) into the sea. Today, a staggering 95 percent of food waste is recycled â a remarkable leap from less than 2 percent in 1995. Seoul has managed to cut the amount of food waste produced by 400 metric tons per day.

Walk along any residential street in Seoul and you’ll see why. On Chung’s street, residents emerge at dusk to deposit small yellow bags into designated waste collection buckets.

Since 2013, South Koreans have been required by law to discard food waste in these biodegradable bags, priced according to volume and costing the average four-person family about $6 a month. By purchasing them from the local convenience store or supermarket, residents are effectively paying a tax on their food waste upfront. In Seoul, this tax pays for roughly 60 percent of the cost of collecting and processing the city’s food waste, according to government data. 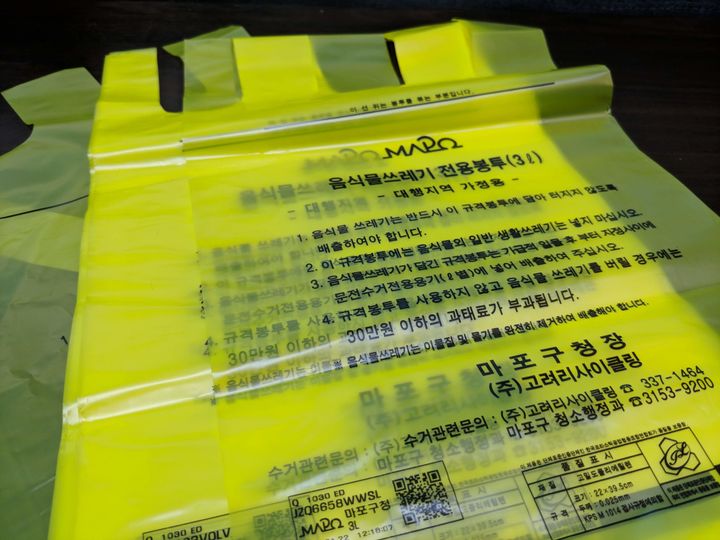 Seoul residents put their waste into yellow recycling bags, which they buy from supermarkets and local stores.

It’s simple but brilliant: Not only does it offer incentives for you to reduce waste, it makes you confront it. “It made me cut down on the food I threw away a lot,”  Chung said. “Not only for economic reasons, but visually it makes you aware of how much waste you’re producing.”

This pay-as-you-waste scheme was born out of necessity. “Unlike countries where meals are one-plate dishes, South Korean food culture is centered around banchan [a variety of side dishes that accompany meals], which creates a lot of leftover food,” said Kim Mi-hwa, chair of the Korea Zero Waste Movement Network. In the late 1990s, increased standards of living, a growing appetite for dining out and the rise of one-person households fueled a steady increase in food waste. In major urban areas like Seoul, landfills had already reached a tipping point.

“The waste just wasn’t decreasing, so we campaigned the government by telling them that we’d need a radical solution,” said Kim, one of the earliest advocates of the pay-as-you-waste scheme. “Not only does South Korea have small land mass, but growing public awareness about the environment made it impossible to just add more landfills or processing plants.” 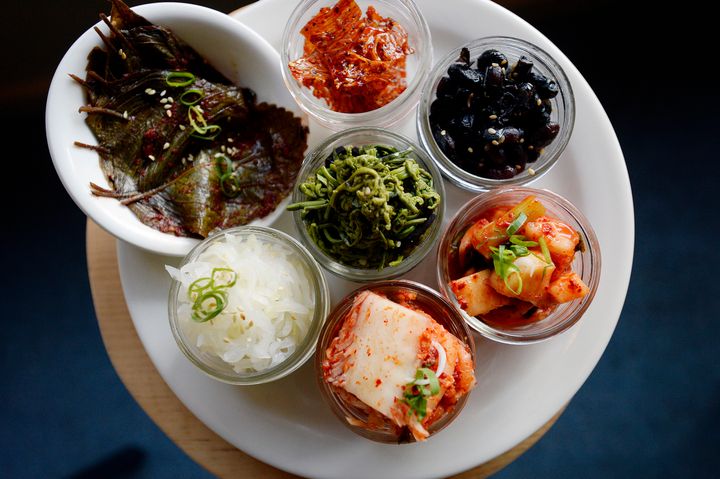 South Korean food is centered around side dishes called banchan, which rarely all get eaten.

Some districts in Seoul use a more high-tech variant for apartment complexes, which has seen even better results. In large metal waste receptacles outfitted with measuring scales and a radio frequency identification (RFID) chip reader, residents can deposit their waste directly, bag-free. The machine calculates the fee by weighing the amount, and residents pay by swiping a card in front of the scanner.

“Over the last six years, we reduced a total of about 47,000 tons of food waste [with the RFID machines],” said Lee Kang-soo, head of the local government-run food recycling program in Seoul’s Songpa District. “We assume it’s because people want to pay less money, since the cost increases with the weight.”

The chief benefit of the RFID machine is that it encourages residents to remove any moisture â which accounts for about 80 percent of food waste â before tossing it in the machine, saving on collection costs. In Songpa District alone, according to Lee, the machines have saved 9.6 billion won (about $8.4 million) in logistical expenses.

Seoul is in the process of making sure all food waste eventually becomes a resource, such as fertilizer for growing food. The city handles about 60 percent of the food waste, while private contractors pick up the rest. Once collected, the waste is shipped off to processing plants, where the yellow bags are stripped off and the food slurry is squeezed to remove any liquids. A giant churn picks out any hard foreign objects, such as errant utensils, before the sludge is heat-treated and pulverized.

The resulting powder is converted into either animal feed or fertilizer. Meanwhile, the liquid squeezed from the waste is fermented into biogas or bio-oil, which can be used as fuel for boilers and other industrial appliances. 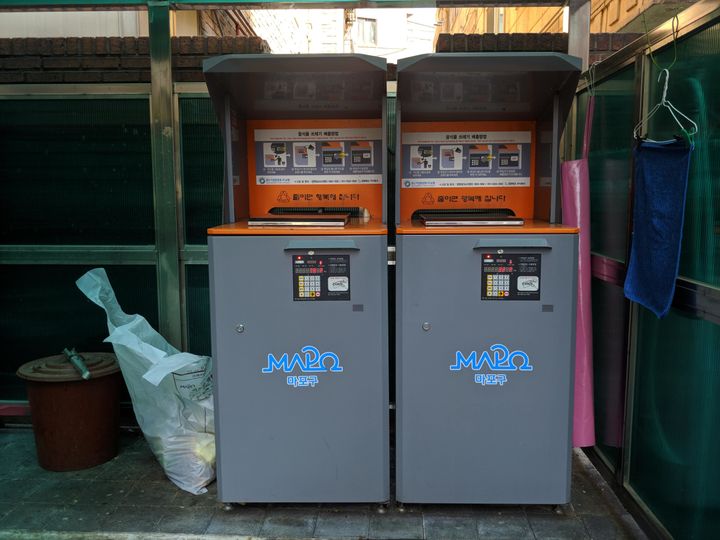 These card-operated machines charge people by weight for their food waste.

Tapping into an urban farming boom, the city has recently announced plans to furnish a number of apartment complexes with large-scale food waste processors to create fertilizer for their gardens.

“I think there needs to be a perception that discarded food isn’t ‘garbage,’ but simply food that we couldn’t finish,” Lee said. “Only with this attitude can these ‘resource-ification’ policies work.”

Despite the program’s success, the need to continue reducing food waste remains stark. Seoul’s food waste processing centers have recently reported large amounts of dry fertilizer stacking up unused â an indication that there is still too much waste being created.

While the government has announced legislation to qualify food waste fertilizer as organic in order to expand its uses, experts, government officials and activists alike stress the need for more fundamental measures that reduce food waste at the source.

“There’s a limit to how much food waste fertilizer can actually be used,” Kim said. “This means there has to be a change in our dining habits, such as shifting to a one-plate culinary culture like other countries, or at least reducing the amount of banchan that we lay out.”

HuffPost’s “This New World” series is funded by Partners for a New Economy and the Kendeda Fund. All content is editorially independent, with no influence or input from the foundations. If you have an idea or tip for the editorial series, send an email to thisnewworld@huffpost.com

Love leads us into mystery where no one can say what comes next, or how, or why.
Caryn Mirriam-Goldberg