Home > News > How Do We Respond? A Question to Artists

How Do We Respond? A Question to Artists

What artist has not reflected on her/his intention in creating art? We ask ourselves what the purpose of our work is and the effect we hope to achieve. Talk to a dozen artists and you'll get a dozen different answers to this question.

Some of us could be engaging in a formal exploration of themes, colors, techniques, materials, or styles. Others are recording observations of places, people, animals, and events. Perhaps we simply want to decorate space or capture beauty. Maybe we're expressing dreams, exorcising inner demons, evoking emotions, moving toward healing. We might be attempting to make visible what's spiritually invisible and to understand our place in the world. If we're deeply disturbed by issues of a social, political, and/or economic nature, the challenge of our art could be to exhort public action. 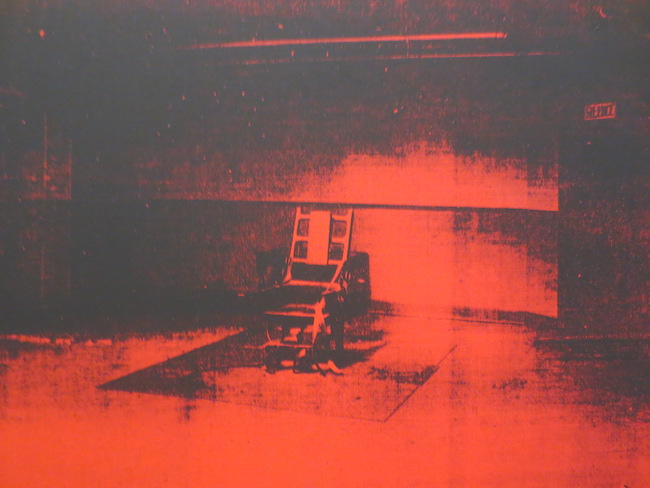 Detail of "Red Disaster" (1963), by Andy Warhol. Silkscreen ink on synthetic polymer paint on canvas. Museum of Fine Arts, Boston. Derived from a photograph of the electric chairs in Sing Sing Penitentiary in Ossining, New York, where alleged Soviet spies Julius and Ethel Rosenberg were executed on 13 January 1953, at the height of the Cold War.

If our desire is to confront the conditions of our times or even earlier periods, how do we go about doing that? What will affect viewers to open up and see things through another heart and mind? Does our artwork have to be blatantly political? Can we offer something that enables people to calm down in the midst of discord and turmoil? Do we create art full of rage in the hope that it will provoke people to act, or do we employ humor? What will be most effective in generating awareness and discussion of charged topics? 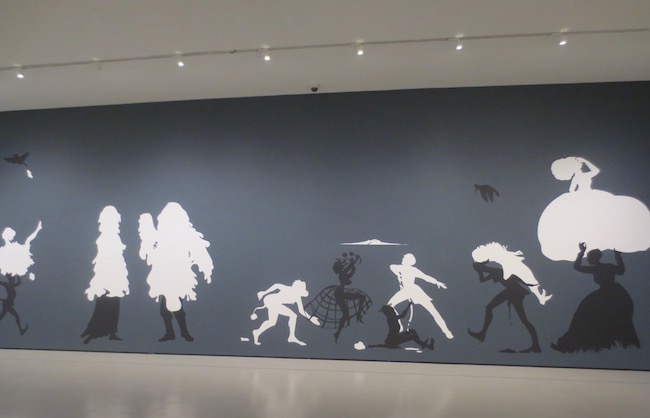 "The Rich Soil Down There" (2002), by Kara Walker. Cut paper and adhesive on painted wall. Museum of Fine Arts, Boston.

In 19th-century American homes, small and delicate silhouettes of loved ones and happy domestic scenes decorated the walls. Finding silhouettes, and racial stereotypes, reductions of human beings, Walker transforms this quaint tradition by turning an entire museum wall into a large tableau of racial and sexual violence in the pre-Civil War South. 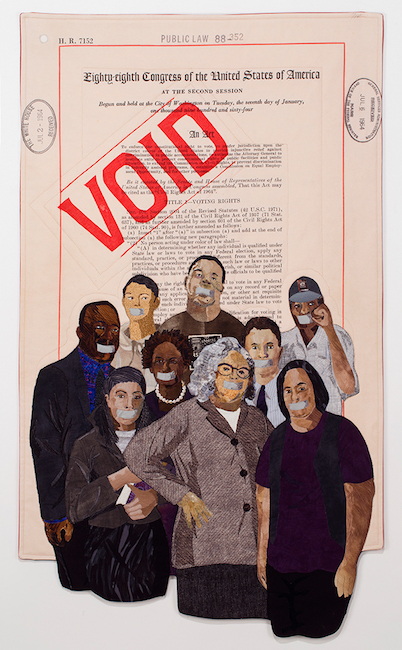 "No Vote, No Voice" (2017), by Alice Beasley. Textiles. This is Beasley's response to the day the Supreme Court gutted the Voting Rights Act and turned its back on voting as central to democracy. 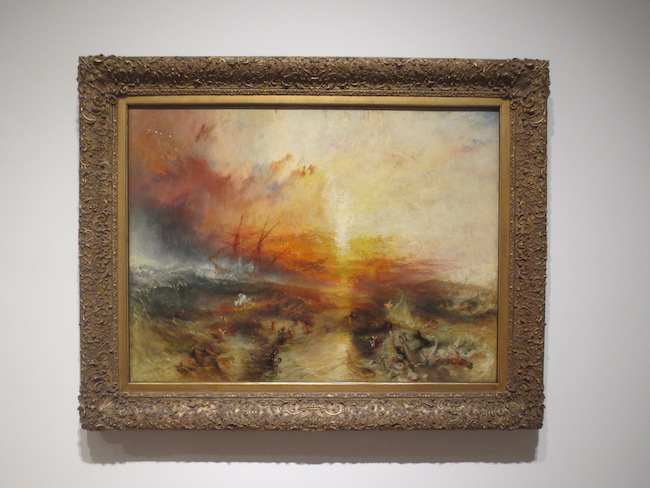 "Slave Ship (Slavers Throwing Overboard the Dead and Dying, Typhoon Coming Out)," 1840, by Joseph W. M. Turner. oil on canvas. Museum of Fine Arts, Boston. A year after the reprinting of Thomas Clarkson's 1808 History of the Abolition of the Slave Trade, this painting coincides with the first meeting in London of the World Anti-Slavery Convention to campaign for the end of slavery. 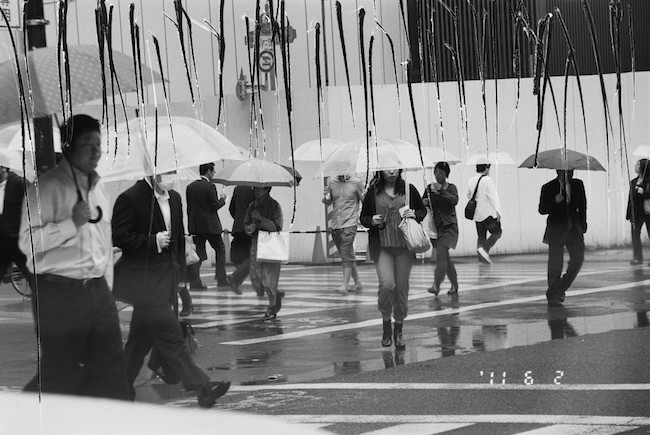 This is Araki's response to the Fukushima Nuclear Power Plant disaster, the largest nuclear incident since that of Chernobyl in 1986. Using scissors, he created gashes in 238 photographic negatives, creating the appearance of black rain, gaping wounds or nails clawing for help. 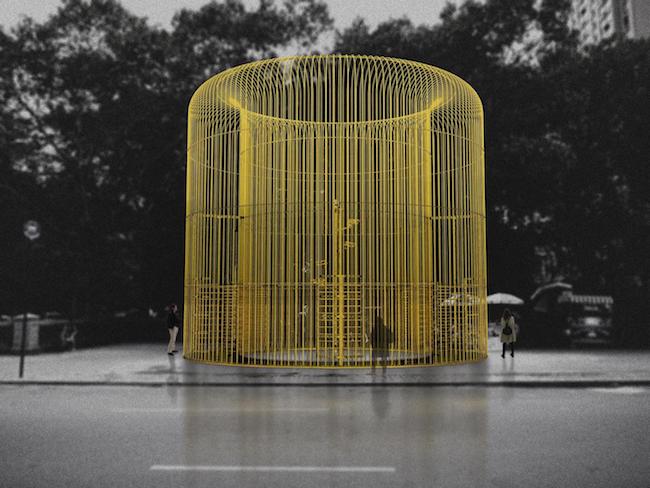 Commissioned by the Public Art Fund, this Chinese artist and activist will build more than 100 fences across New York City in response to the international migration crisis. He was an immigrant in NY in the 1980s for 10 years. Source: various online news releases.

Not every artist feels compelled to tackle vexing issues in a direct visual statement. At least for now, I am one of them. However, this doesn't necessarily mean remaining silent. I've chosen to be involved in hands-on action for immigrant members of my community. But those who do choose to give public voice to their concerns and resist the wrongs they perceive approach their art projects in individual ways. The images I've gathered reveal how certain artists have responded to the conditions they know about through personal experience or learn about through the news as well as friends, relatives, and colleagues. In some cases, the work of a single artist, such as Doris Salcedo, can vary greatly in form and material. 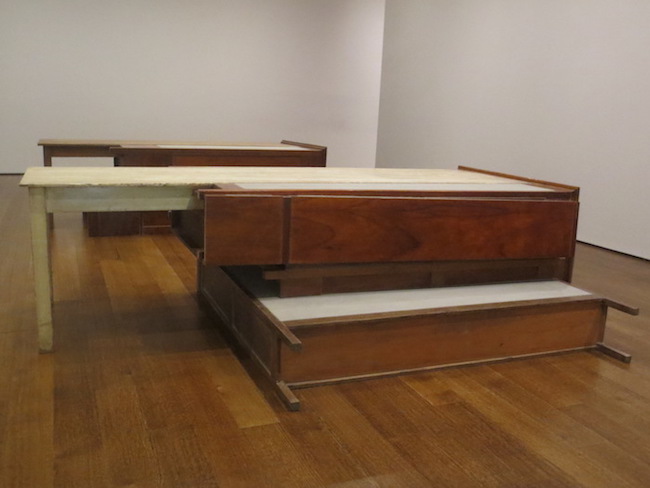 The image above and the one below are of works from "The Materiality of Mourning" by Salcedo, a Colombian artist based in Bogotá. They contain items that convey both a familiar sense and an unsettled feeling. The furniture is piled together at disjunct angles; the chairs are partially crumpled or otherwise damaged. They seem to reference domesticity, but they embody tragedy, for they are no longer useful and the homes in which they might have resided are no longer inhabitable by those who have fled for their lives. 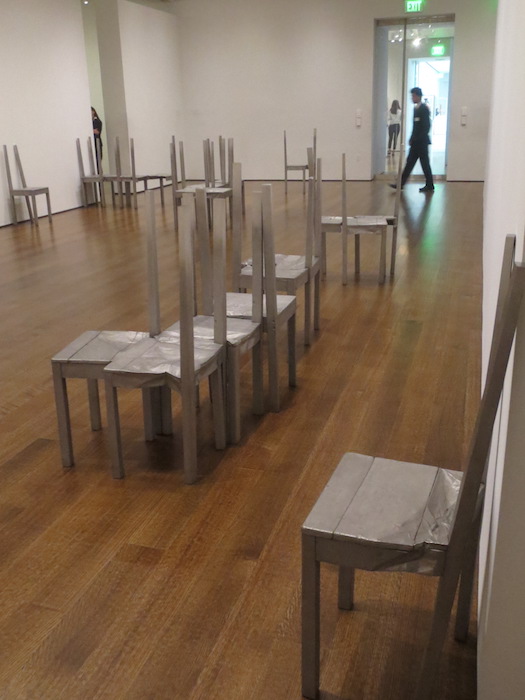 In my early twenties, I was fortunate to live and work in Colombia during a halcyon period, when a reign of horrific violence did not grip this beautiful country. Born in 1958, Salcedo, did go through the turbulence and brutality, and members of her own family were among the many people who vanished. Her sculptures and installations address the pain, trauma, and loss that Colombians have suffered because of a ferocious civil war among government forces, drug cartels, leftist guerrillas, and right-wing paramilitaries. At the same time, she provides space for both individual and collective mourning. Her artwork deals with the fact that beyond grief lies the unbearable emptiness left by the disappearance of loved ones.

Click the link for a short video in which Salcedo guides viewers through this terrain and demonstrates why "art cannot explain things but it can expose them--that's why art here is so important and necessary": https://www.theguardian.com/cities/video/2016/jul/26/artist-doris-salcedo-bogota-forces-work-brutal-video

While the images above are of hard materials, Salcedo's work is also of a delicate nature. A Flor de Piel, below, is a large "shroud" made of real rose petals sutured together by hand. According to the artist, the piece is intended as "a flower offering to a victim of torture, in an attempt to perform the funerary ritual that was denied to her.” Measuring approx. 11 ft. x 16.5 ft., this tapestry is comprised of thousands of treated and preserved, hand-stitched rose petals and intended as a shroud for a nurse who was kidnapped and tortured to death. Equally delicate is Disremembered, a series of fragile-like, ghostly blouses that Salcedo developed after interviewing mothers who had lost their children to gun violence in Chicago. Through these sculptures, based on one of her own blouses, she gives form to the lost bodies deeply mourned by their families yet often ignored by society. Each one is made of raw silk threads interspersed in an irregular pattern with more than 12,000 tiny, blackened needles. The result is a kind of hair-shirt that both suggests and inflicts pain.

What else do artists do when faced with something so atrocious as to be unimaginable? When World War II revealed inhumanity on a scale never before witnessed, they responded to the horrors in every medium.

German painter Max Beckmann (1884-1950) created a portrait of the era with traditional still-elements--skulls, extinguished candle, playing cards--to intimate the frailty, unpredictability, and impermanence of life. He created Still Life with Three Skulls in 1945, during the final months of the war, while living in Amsterdam, where he had fled in 1937. He described those years as "a truly grotesque time, full to the brim with work, Nazi persecution, bombs, and hunger." 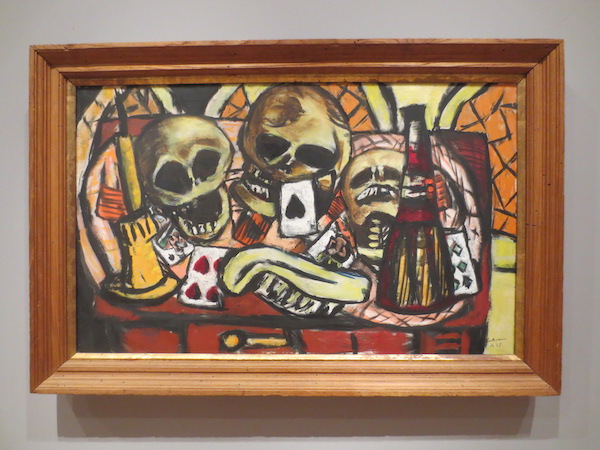 Some people tried to capture what was happening through photographs, in the hope that someone would eventually know the reality, not the lies. An exhibit at the Museum of Fine Arts, Boston, "Memory Unearthed: The Lodz Ghetto Photographs of Henryk Ross," is only one of many such endeavors. Between 1940 and 1944, at great risk to himself and his family, Ross hid in places where he was forbidden to go and concealed a camera inside his coat in order to take pictures that depict the tragic poignancy of being singled out for genocide: driven by extreme hunger, people desperately dig for the rotten potatoes thrown away by Nazi soldiers; taken from their parents, children are literally carted off to a death camp; forced into deportation, people leave behind their dishes and food pails. He hid some 6,000 negatives in iron jars in an iron-rimmed box, which he buried in the ground. Miraculously, he survived and was able to unearth the documentation, much damaged by groundwater, once the war ended. 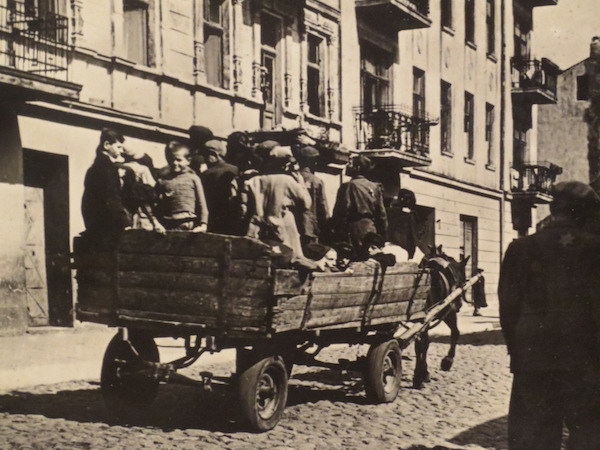 There are so many other works of art that I could include--famous and not famous--about violence committed against women, children, and other beings, against the oceans and forests, against people of one religion, ethnic group, race, nationality, or another--but the list is endless and a blog isn't supposed to be. Just know that artists everywhere are resisting and protesting in the name of immigration rights, housing, healthcare, free speech, equal opportunity, religious freedom, indigenous rights, environmental protection, LGBTQ rights, and much more.

But what happens when art is used for opposite reasons? In the play Leni, at the Aurora Theatre in Berkeley, California, the main character, Leni Riefenstahl, says: It's just a film. Can a single piece of art really be so dangerous?  It's an important question. In Riefenstahl's case, the answer was "yes." Though lauded for artistry, her films "Triumph of the Will" (1935) and "Olympia" (1938) were funded by the Nazi government, which used them as powerful propaganda tools: to glorify Aryan beliefs about racial "purity" and the superiority of the "Germanic master race" to take over the world. Yes, art can be dangerous when used against others. Which leads me back to the question at the beginning of this post: What is the purpose of our work and the effect we hope to achieve? Added to that, what is an artist's responsibility in polarizing times, such as our own?

I'll end with some words from poet Mary Oliver's latest book, Upstream: Selected Essays:  "...the power of every idea is intensified, if not actually created, by its expression in substance....[T]hose who are the world's working artists are not trying to help the world go around, but forward."

Questions & Comments
How do artists play a galvanizing role in shaping popular opinion on the defining issues of our times?
Is an artist responsible for how his/her artwork is used?
What work of art changed your mind and heart about a troubling political/social condition?
How do you use your artistic voice to express your stance on issues of concern?

Syndicated from Mirka Art the blog of Mirka Knaster. Mirka is a textile artist with a decades-long career as a writer. Working with textiles from around the world and exploring the heart of art evoke her enthusiasm and joy daily.

Listen to the trees as they sway in the wind. Their leaves are telling secrets.
Vera Nazarian